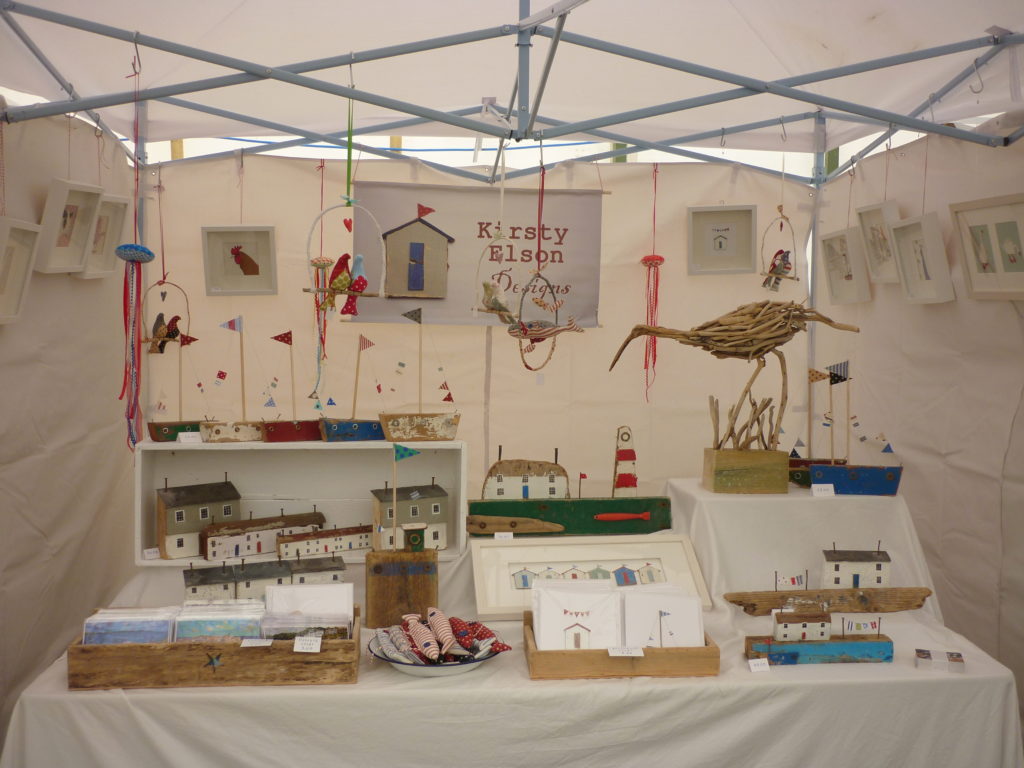 Last summer we ran a very popular series of posts on all sorts of aspects of how to sell at a craft fair or market. From choosing the right craft fair to what to say to customers, and none has been more popular than our post on how to create a great craft fair stall.

Whilst browsing facebook last month I noticed that Kirsty Elson, a popular Folksy shopkeeper, was preparing for a craft show. It was fascinating to watch her updates detailing her (sometimes frantic!) making for the show deadline, so I got in touch and asked her if she would share her story here after she had recovered from the event. I wanted to add to our series of useful craft fair secrets with a very personal take on the ups and downs of preparing for a craft show and anything that Kirsty had learned from the experience or that she may do differently next time.

As a rule, I don’t do many craft fairs. I tend to stick with a couple of familiar ones – and these only take place once or twice a year. I just don’t seem to have enough time to make loads of stock on a regular basis. To be honest, I find it a little stressful – and no matter how organised I promise myself I will be next time, I am inevitably still frantically making the night before the event!

Shortly after Christmas, I received an e-mail from a lady who runs a craft tent at the Royal Cornwall Show, a huge agricultural event, inviting me to exhibit. Naturally I felt flattered, but a lot of questions flew around my head: How much would it cost? Would my products fit in at such an event? And what do I do about childcare over the 3 days of the show?

The price was actually a lot lower than I had anticipated, and though it’s natural for a maker to think, ‘I need to make a lot of sales to get that money back’ (ie break even) , I decided to take a different approach. I figured that whilst sales were important, it would be a really good experience for me to have a go, and get myself ‘out there’. The event is vast – well over 120,000 people attend – and you just never know who’s going to be there! 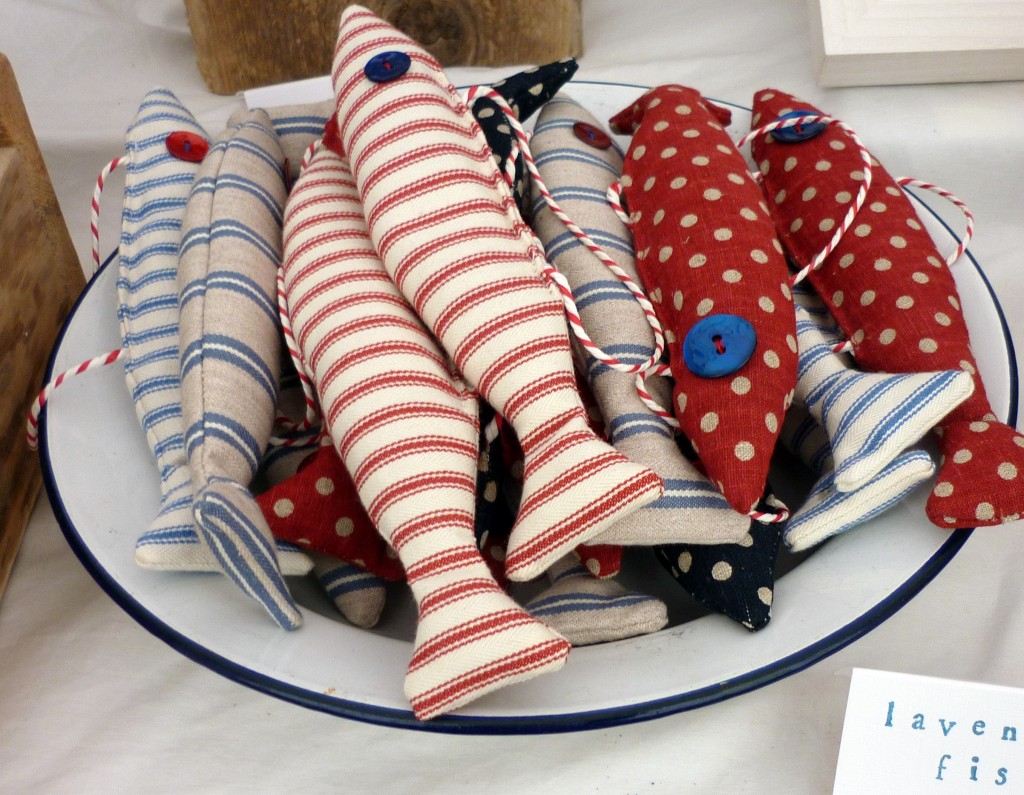 I had about 6 months to prepare – but with a busy workload and a young family, I didn’t properly get down to it until about 6 weeks before. Royal Cornwall Show is a 3 day event – and far bigger than anything I’d ever done before. I had no idea how much stock to make! It would be awful not to sell anything, but just as bad to sell out on the first day and have an empty table for the remainder! I decided that I would concentrate on low-cost items that I knew I could sell elsewhere should it be a disaster, and make a whole variety of other items that would nevertheless sit well together and draw attention to my stand.

The time grew closer and I became increasingly nervous. I’d had to consider factors which I hadn’t at smaller fairs. For a start, a gazebo or similar was essential (extra cost, but I’ve got it now, and can utilise it again). I also bought a banner and ordered plenty of business cards.

Soon enough the time came. I was very fortunate that my partner was able to take time off work to look after our boys, and that my friend (The Cow Lady) was also exhibiting and gave me a lift in everyday!

We set up the day before the event started. Setting up in itself took half a day! Only when everything was hanging in it’s place could I breathe a sigh of relief. Too late to make anything else now – too late to worry! 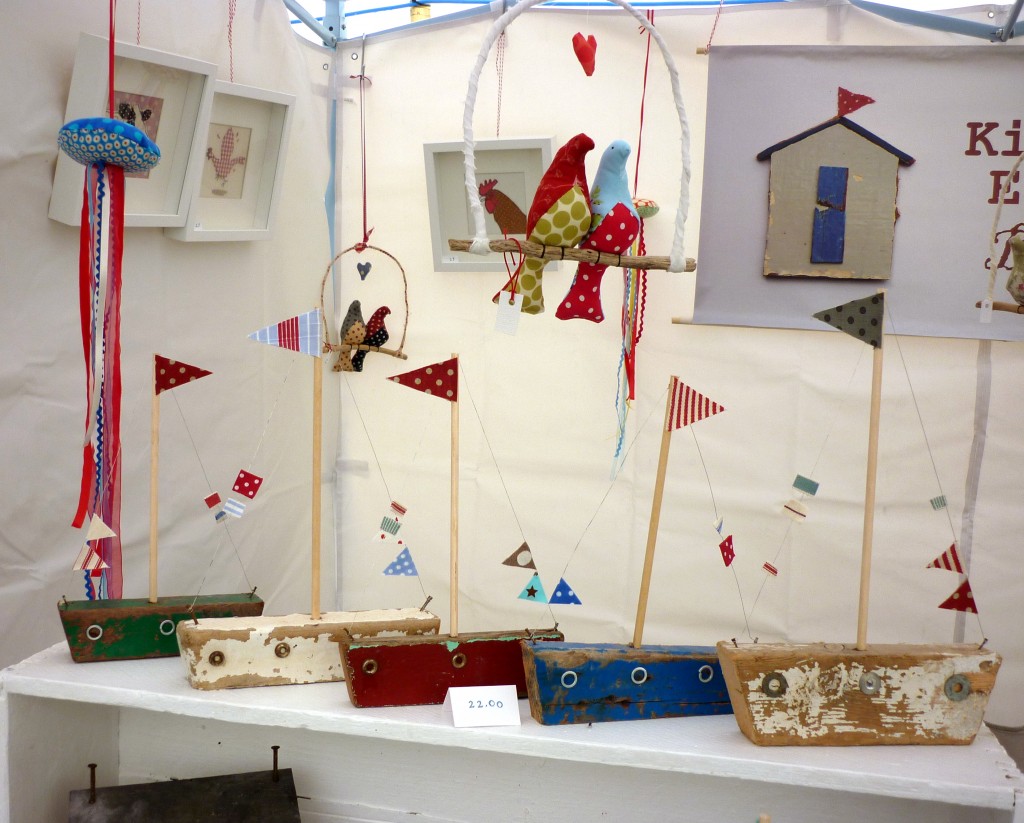 Three days on my feet from 8.30am – 6.30pm was far more exhausting than I could have imagined! And how did it go? To be honest, I still haven’t made up my mind! I did ok, sales wise, and I met some great people, but it was blimmin hard work! There were some lovely customers for whom my style of work is right up their street. Too bad that there were a lot of people who simply walked past me without giving my stand a glance, and that can be really disheartening! And whilst the crowds piled in to the marquee when it rained, they weren’t spending any money. These are difficult times for people. On the upside, I gave out 200 business cards, so who knows where that may lead?

I’ve just signed up for a Christmas craft fair at a very reputable venue. It’s far more likely that the customers there will be visiting solely for the crafts on sale. I’m going to be super-organised for that one!

A beginner’s guide to TikTok for artists and...

How to be featured on Folksy

Folksy guide to selling to the EU and...

How to write an engaging USP for your...

Really interesting post – my mum is an artist and we used to travel from Norfolk to Cornwall for this show when I was a kid to exhibit. I love the idea about not being too hung up over sales – definately a hang up of mine!!

Good to hear how people get on at these shows, you always wonder how well you can do and good tips for newbies thinking of attending a craft fair.

Great article, I must say I too get really nervous before shows. I always worry about how my work will look next to everyone elses! I know its not something I should worry about but seeing how other people display their work is really interesting.

What a really honest and refreshing blog! A realistic story of the concerns most of us crafters have when thinking if to accept an invitation to a show and the pressures we put ourselves under! Being completely aware of this pressure I decided to add to mine by organising for the first time, last year the http://www.contemporaryhomemadefair.com event. Aware that I had asked quite a few untapped craft talents to the event I sent out a Hints & Tips sheet on preparing, selling etc at the fair to all my exhibitors which was found to be helpful, thankfully! I just wonder why more show organisers don’t!

Lovely stall Kirsty!! Looks amazing you must work really hard to you make it look so easy! I hope you get loads of sales ;o)

Kay – I think it shows a great craft fair organiser when they know that the success of the stall holders is vital to the future success of the fair – so many crafters feel that the organisers care more about lining their pockets and are left feeling resentful about paying their stall money.

As well as great organisation skills, it takes good customer service and communication from an organiser to have a big community of happy stallholders (a little like what we try and do here at Folksy, just an online version!)

Thanks so much for writing this for our craft market tips series Kirsty – I hope it brings you some new leads and customers!

What a great and sooo true article Kirsty! I always do the same and promise I will be hyper organised before a show but some how to I end up rushing near the end and making things at the very last minute! :)

What a great post, really interesting to hear about the amount of sales as I also wonder how it goes at big events like that. It’s really great that you gave out so many business cards though, I like to take a card and then have a good nosy through the website when I’ve got a comfy chair and a cuppa so I hope something comes of giving them out! Helen :)