Home News How you can protect the future of craft

In November 2014 The Crafts Council launched its manifesto for education and making at the House of Commons. Called Our Future is in the Making: An Education Manifesto for Craft and Making, it sets out why craft and making is vital to our society, culture and economy, why craft education matters and why it is crucial that we secure it. It’s critical that the British Government acknowledges the importance of craft in education and acts to protect it. The manifesto was developed by the Crafts Council with and on behalf of the whole sector: makers, businesses, students and educators – and embraces craft and making in all their forms. As people that make, teach and live craft, that means you. So we asked jeweller and Folksy maker Gwin Kerry to explain why the future of craft education matters to her, why it should matter for all of us, and what you can do to help.

My youngest nephew had his 7th birthday the other day. I always buy my nephews something they can make or build as a present – they don’t know why – they’ve just come to expect it from auntie Gwin. They probably think it’s because I’m a bit weird and I have a creative job, I suppose. And, yes they’re right, I do. Both my nephews love making things and I like to encourage it, because I recognise the importance of craft.

I recognise not only the beneficial effects it has on my nephews’ growth and development but also how craft and making shapes our physical world and experiences. From the house you live in and the car you drive, to the arty sculpture you drive past every day on your way into work; from the hip replacement you had last year to new prescription medicines; from the newest fancy gadget to this seasons must have fashions, to the tools you use to realise your own creativity, the list goes on… craft is inbuilt. Even if you hadn’t noticed before. 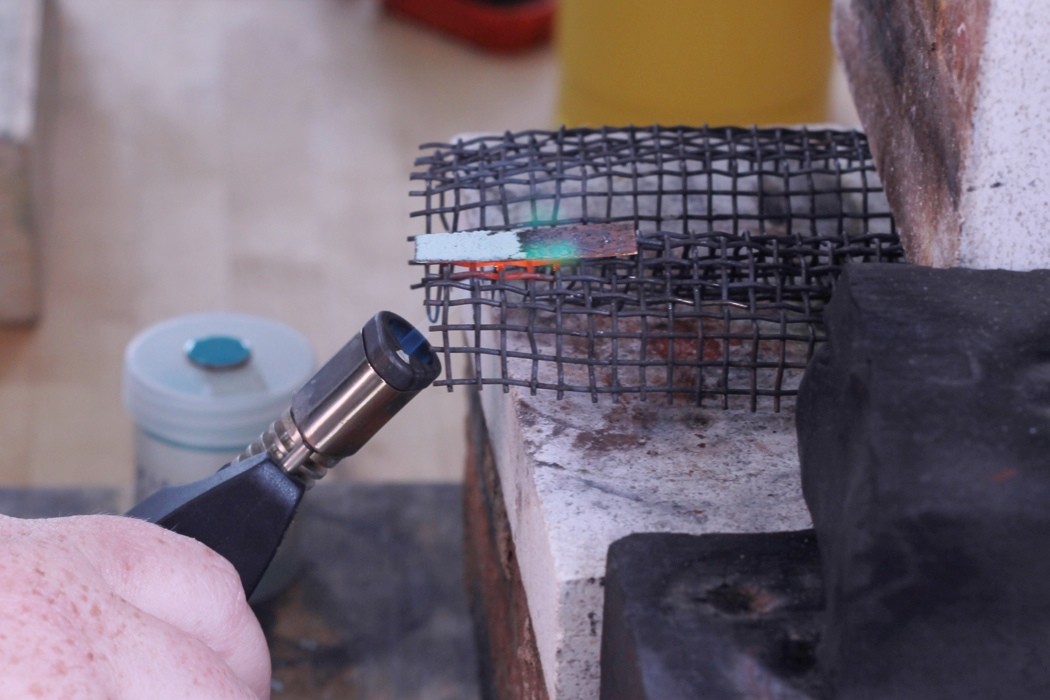 Gwin in her studio: “Imagine the effect a hands-on making activity can have on pupils who don’t easily access the curriculum in the prescribed manner”

Being a (now ex) Design and Technology teacher I also appreciate the seemingly magical effects craft can have on disengaged pupils in schools. I know that when I am in the process of making I feel calm, focused and happy that my brain and hands are creating. You will have similar reasons for making – even though it can be frustrating at times, it feels right. Imagine, then, the effect a hands-on making activity can have on some of the pupils who don’t easily access the curriculum in the prescribed manner, when they realise they can make something, they can focus on an activity and they can succeed. My design and technology workshop had a somewhat miraculous effect of transforming sometimes the most wayward students into inventors, builders and artists. I don’t think I’m exaggerating when I say that little else can motivate and engage students like craft, creativity and making. So craft and making is important for everyone, and for some, even more so than others.

So knowing the effect craft has on society at so many levels, it’s disappointing to learn that studies show the take up of craft-related GCSEs has dropped by 25%. And it’s alarming to find out that the number of Higher Education craft courses available has almost halved. Rosy Greenlees, executive director of the Crafts Council, told The Times: “Craft subjects have been seen as not leading to employment and that automatically has an impact on higher education, leading to course closures.”

It’s also true that for older generations, woodwork and metalwork classes (which eventually morphed into Design and Technology) were reserved for those students who were deemed less able. It is still considered true today to some extent. I argue that having an aptitude for making and doing, rather than rote learning dates isn’t a millstone of failure, it’s just a different way of being.

And let’s face it, craft to a lot of people is just little old ladies knitting, or Grandpa idly whittling a piece of random branch he found, or weird auntie Gwin who used to have a proper job but now makes jewellery instead. Craft for some is stuck in the realm of ‘cute’, ‘hobby’ and ‘just something to do’; or represents nostalgic, archaic skills that no one really needs anymore but that still have a small minority of fans appreciate them with a gleam in their eyes as they remember a better yesteryear. To many people, craft is geeky, a bit silly and ultimately a bit pointless.

Craft skills often aren’t appreciated. Which is where The Crafts Council’s manifesto comes in. 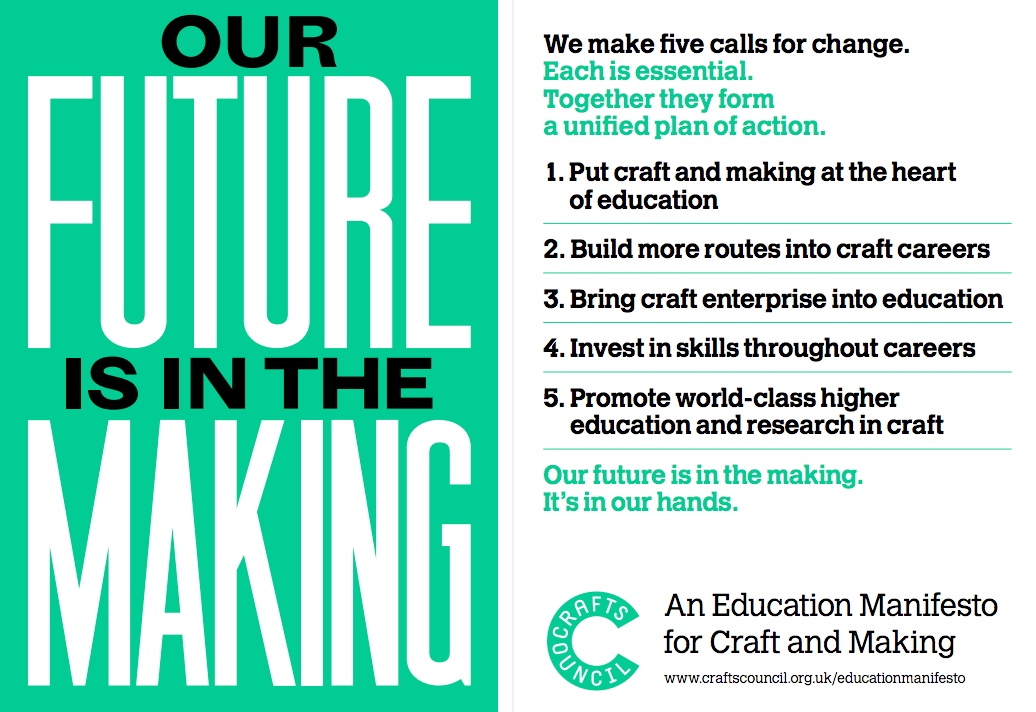 The manifesto
The manifesto calls for five changes to be implemented (read it in more detail here):

Granted, that might sound a bit dry but they are appealing to the government so perhaps it has to be. In a nutshell, the manifesto is calling for not just schools, colleges and universities to raise awareness in an attempt to influence governmental policy but also small businesses, local makers and employees whose work is based in craft to shout about how important their skills are. How what we do as makers supports growth and development at all ages, encourages creative thinking and problem solving, is entrepreneurial and ingenious, engaging, provides important material experience and understanding of the world around us… and I haven’t mentioned the historic and cultural relevance of craft.

However, in order to get the government on board, the argument has to be put into terms they will respect. Namely money and power. So the Crafts Council has found that craft contributes a hefty £3.4 billion to the economy and employs 150,000 people. Maybe that will interest those who control the purse strings.

Additionally perhaps they’ll listen to the well-known names of the powerful and elite of the art and craft world, who signed the open letter to The Times to mark the publishing of the Manifesto. Over 100 people signed. Big names from the arts, broadcasting, academics and educationalists, artists, creative directors, collectors and consultants – you get the idea – have all pledged their support. So what can we do if we’d like to chip in and show our support too?

How can we help?

Because, as the manifesto says, “Craft Education nurtures the 21st Century skills of collaboration, communication, creativity, problem solving and resilience”, this weird auntie at least, will be giving her nephews things to make and do for all their birthdays – most likely until they are adults, by which time I hope they appreciate craft too.

Gwin Kerry is a jeweller specialising in copper and enamel. Having in the past been a teacher, a waitress, an administrator, student, she now runs her small business from West Studios in Chesterfield, Derbyshire.

Featured image: Ceramics in the making at Little Wren Pottery

The Sell on Folksy App is here!