Popular Posts
Buy Less, Buy Better, Buy Handmade
Craft Fair Secrets – How to Make a...
How to take product shots on your phone
How to sell more at markets, craft fairs...
Craft Fair Secrets – How much stock do...
How to choose the right social media channel...
Meet the maker: The Cornish Coaster Company
Craft fair inspiration – big ideas for small...
Meet Sara Tasker from Me and Orla –...
The best Instagram hashtags for craft and handmade
How to find your confidence as an artist...
10 fun gifts for teachers to make with...
The best Instagram challenges for makers & why...
Craft Fair Secrets: Not sold much? Here’s why...
Everything you need to know about tax if...
Meet John Bloor – the printmaker carving beautiful...
Home NewsDevelopment How was it for you?
Development

How was it for you?

So our biggest release since we launched was pushed live last Friday 18th at around 09:30. The site was down for around 10 hours whilst we migrated the data and the new code over and tested the application on the live servers. This release will be followed by more frequent updates to the site to improve the experience for buyers and sellers. We highlighted some of the upcoming changes in the third design post and this work has already started.

We were overwhelmed by the positive response to the new release. Below are just some of the tweets we received in the hours and days following the launch: 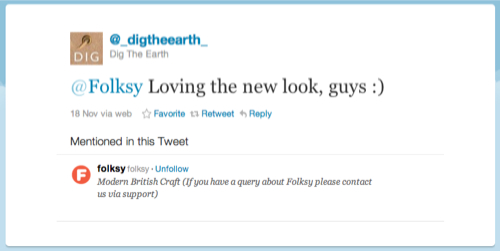 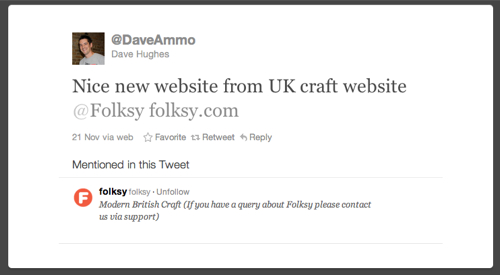 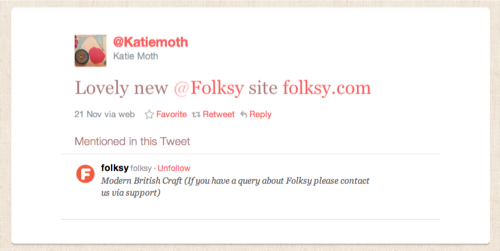 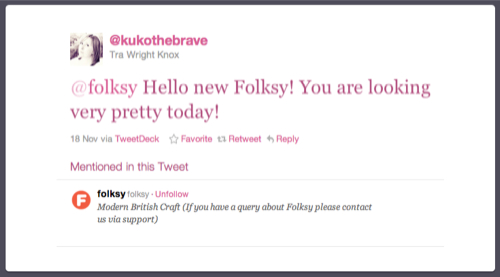 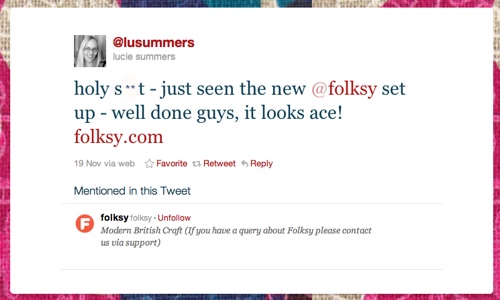 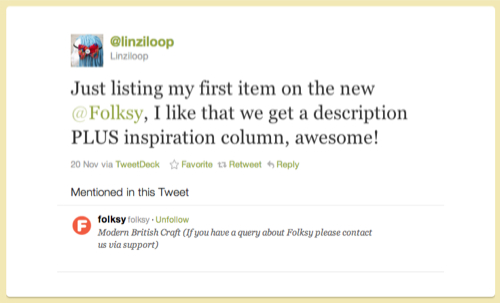 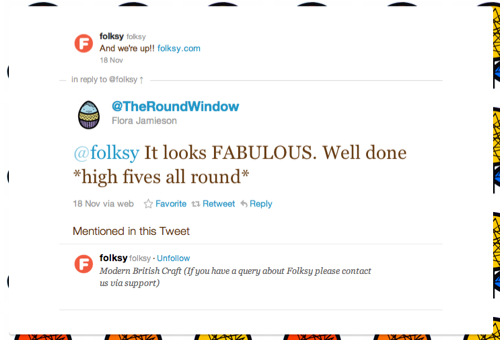 Some people helped to spot bugs and issues which we worked on quickly to resolve. The main issue was a problem with IE8 and what turned out to be a problem with two unrelated things (javascript and valid CSS) which when combined caused IE8 to crash. This is quite common with Internet Explorer versions before 9 (a problem that Facebook and Barnes and Noble have also encountered). IE8 accounts for approximately 15% of all site visits so it’s not insignificant (but neither is it the majority of visitors). The problem was fixed within 48 hours. Other constructive feedback helped to identify a few browser specific issues around the listing process. All of the issues which could be replicated were resolved within 96 hours of going live.
We also had a few people say that they struggled with the new logo and themes due to problems with colour blindness and dyslexia. The site is accessible and all the javascript degrades well so is usable for people that use screen reders for example. Colour blindness has different types and logos and branding are exempt from accessibility issues and as it only seems to be the logo and the branded themes that people have been referring to the site conforms with all key accessibility and usability guidelines.

It’s early days but comparing four days after launch with the previous week, we saw more unique visitors and a lower bounce rate which is really encouraging.

The document Site Re-design Changes in support outlines some of the changes to the new site which people contacting us about. It’s worth having a look at that to see what has changed and why.

Thank you again for all your feedback.

Initial response is
(a) I would like to see some of the negative responses listed as well as the positives for a more balanced approach.
(b) I would also appreciate some statistics at the end of the week comparing sales against last weeks. Mine are down to 10%.
(c) Most importantly why oh why did you do this at the start of the busiest week of internet shopping.
Joy

Hello Joy,
If you check the twitter stream for the period you’ll find this is very representative. The overwhelming response was positive.
If you check your sales traffic I’m sure you’ll see ebbs and flows through the year. This can be for a number of factors and not just due to any change in the website design itself.
We released the designs last week as many of the improvements would help buyers to find things they wanted in time for their busiest shopping period (and to make the listing process simpler for the many designers and makers wanting to list and sell).
Best,
James @ Folksy

I love it, I’ve had more sales in the last few days, than in all the time I was on it previously!!!
I would really like to be able to put the size in numbers though, not words, I could at 1st, but not now, and bring back our individual item viewing figures, these are invaluable to see what is popular in our shops
Sue

Hi Sue, That’s brilliant! The changes are aimed at helping peoples’ work be found and giving it the best possible chance to sell itself (improved gallery views and item pages for example) and we’re pleased this seems to have worked for you.
Item viewing figures will be back as part of a far better dashboard experience. However, in the meantime we suggest using Google Analytics which is integrated with Folksy so you can track your own items and your shop views and get far better insight into customer’s behaviour than item views alone provide. There’s more information on how to do that here:
http://support.folksy.com/kb/selling-on-folksy/how-can-i-tell-how-many-people-have-viewed-my-shopitems
Best, James.

Whilst it does look nice certain parts aren`t working nicely at all. The search facility appears to have no way of filtering by colour or price or even relevance, this morning I tried to search for wrist warmers & was shown approx 800 pages many of which weren`t wrist warmers! As Missy says many people buyers, sellers or indeed both aren`t happy with things, many are also thinking of “jumping ship” maybe you should comment a bit more on the forums & put their minds at rest or you may end up with many fewer buyers/sellers to look at your new & shiny site.

Hello Diane, We’ve dealt with all the bugs raised in the forums and did so in 96hrs of the change. The major design changes were made, remember, as a result of feedback given from the community of buyers and sellers who wanted a better browsing experience and also a more efficient way of listing work. So we’re listening. Search is the next major release on the workstack – adding the ability to refine results further (by category, price and other facets) as explained in the previous blog post. It’s great that people want change so quickly and we are making great progress but it’s one step at a time.
Best, James.

The design is being fairly well received but not good for people like me that are dyslexic and colours play with the letters I can read 1 title on the front page the rest are blurred and jumbled and really start my head hurting but I am in the minority.
I agree that you should try and comment on the forums a bit more to help people with the transition as confusion is high and there are still a lot of people struggling to get to grips with how things work. On a personal note I was disappointed that it took me 4 times more time to list a few items and could actually go and make a cup of coffee whilst it worked away and it still wasn’t uploaded when I came back.
Another thing that would be interesting to find out is if any advertising (outside of the craft circle) was being thought of by folksy to bring more buyers in, which in turn would bring more sellers in and lift the profile of folksy. As sellers we work hard to promote but could do with Folksy helping give a push especially with the new site up and running.
Advert=buyers Buyers=Happy sellers Happy Sellers= increased revenue for sellers and folksy
Then naturally more sellers will want to be a part of it

Hi Rachel, thanks for the comment. We are listening in the forums and commenting too. But it’s not possible to answer individual queries in large public forums like that. The announcements thread is used to explain many of the things we do in response to things mentioned on the forum – for example: http://support.folksy.com/kb/announcements/site-re-design-changes
The listing page is firstly a one page listing which is a big step forward and something everyone requested. The time it takes to upload and process images and data is longer than before as we’re doing more with the images, but we’re going to be speeding this up in future releases by doing a lot of this in the background (which isn’t technically trivial).
Advertising is something we’ve trialed and will continue to do but we’ll have to do that selectively as the cost of doing that way outstrips average revenue from individual sellers. We have set up a deal with Mollie Makes for individual sellers to get a discount on a special Folksy classified advert if you’d be interested in doing that? We believe PR is the most cost effective and sustainable way of raising awareness for now but we will continue to trial advertising like the recent well received ad in Selvedge magazine.
Hope this helps,
James @ Folksy

well done, I really like the way everything’s looking!

Hi,
After a few initial probs (I was one of the IE8 people) all is now well in the world of Folksy, but I agree with Sue Trevor, would love to get individual viewings back. How long till the new dashboard? Am using Google Analytics but it just isn’t the same and abit longwinded.
Many Thanks
Caroline