Popular Posts
Buy Less, Buy Better, Buy Handmade
Craft Fair Secrets – How to Make a...
How to take product shots on your phone
How to sell more at markets, craft fairs...
Craft Fair Secrets – How much stock do...
How to choose the right social media channel...
Meet the maker: The Cornish Coaster Company
Craft fair inspiration – big ideas for small...
Meet Sara Tasker from Me and Orla –...
The best Instagram hashtags for craft and handmade
How to find your confidence as an artist...
10 fun gifts for teachers to make with...
The best Instagram challenges for makers & why...
Craft Fair Secrets: Not sold much? Here’s why...
Everything you need to know about tax if...
Meet John Bloor – the printmaker carving beautiful...
Home Seller TipsCraft Fair Advice Craft Fair Review : The Knitting and Stitching Show 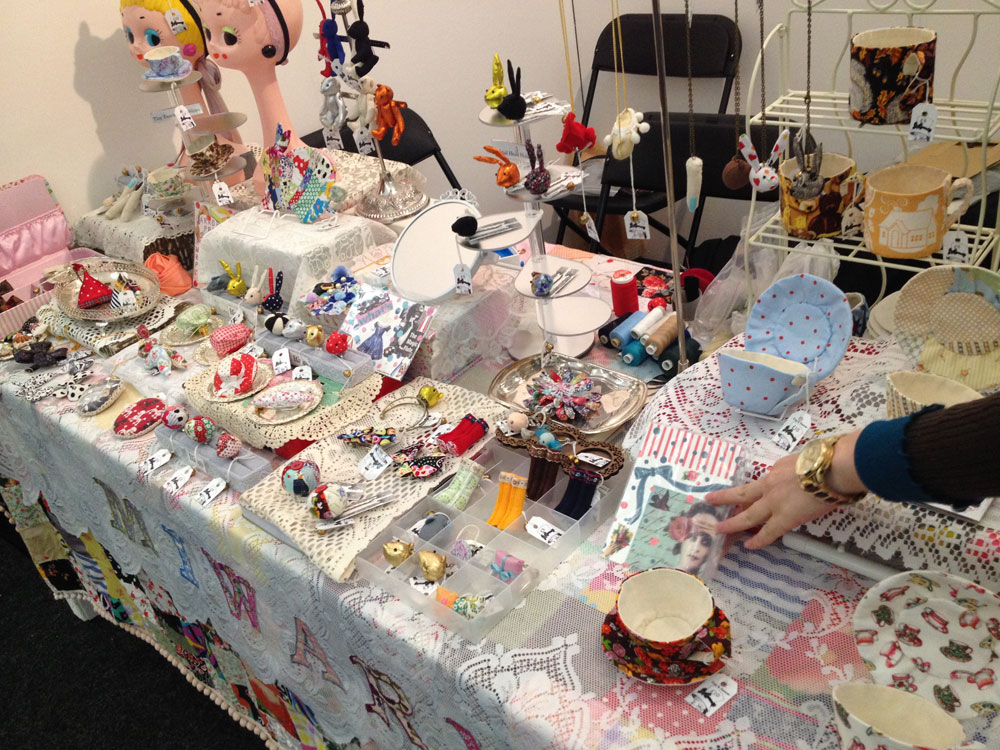 Show: The Knitting & Stitching Show
Reviewer: Max Alexander from Max’s World
Dates: 10-13 October 2013
Venue: Alexander Palace, London
What was the venue like? Huge! Spread over three large halls.
Cost of stand: £540 with the Folksy offer  (£200 less than the regular price).
Entrance: £15 on the day. Advance tickets are £6.50-£12
Crowd: Women of all ages. All of them were either knitters, stitchers or people with a keen interest in textile arts.
Footfall: Great, very busy for the entire 4 days.
Organisation: Yes, everything went smoothly.
Sales: Incredible. Lots of sales and wholesale interest.
Would you do it again? Yes! 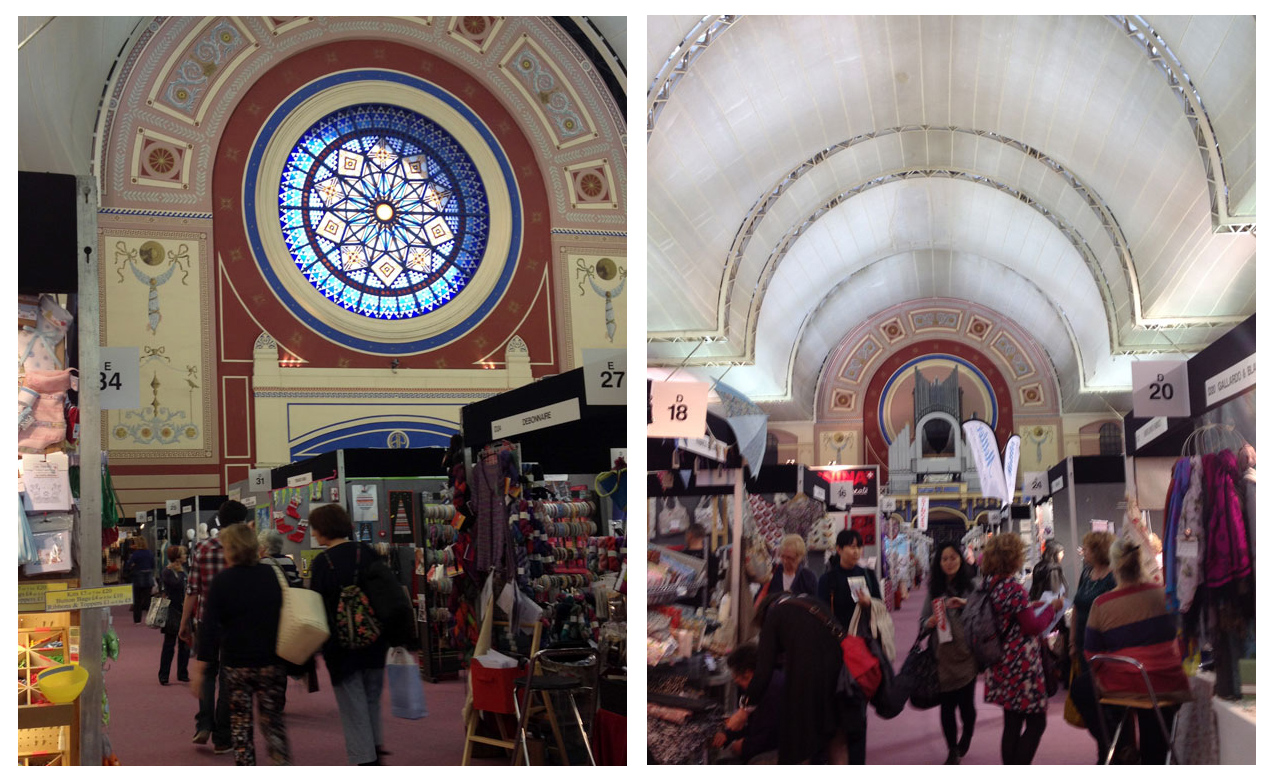 The Knitting & Stitching Show is spread over three halls

I’ve attended the Knitting and Stitching show in the past and knew it was a really busy and popular event, so I was very excited to have a stall there for the first time.

This was the busiest event I’ve ever done by a long way. There were people looking at my stand almost the entire time for four days. I believe there were around 50,000 visitors. Although my stand was towards the back of the smallest hall, people really did make an effort to see everything. Also, I was near a café, which certainly helped traffic! The show has been running since 1991, so lots of people already know about it and it’s really well advertised too. 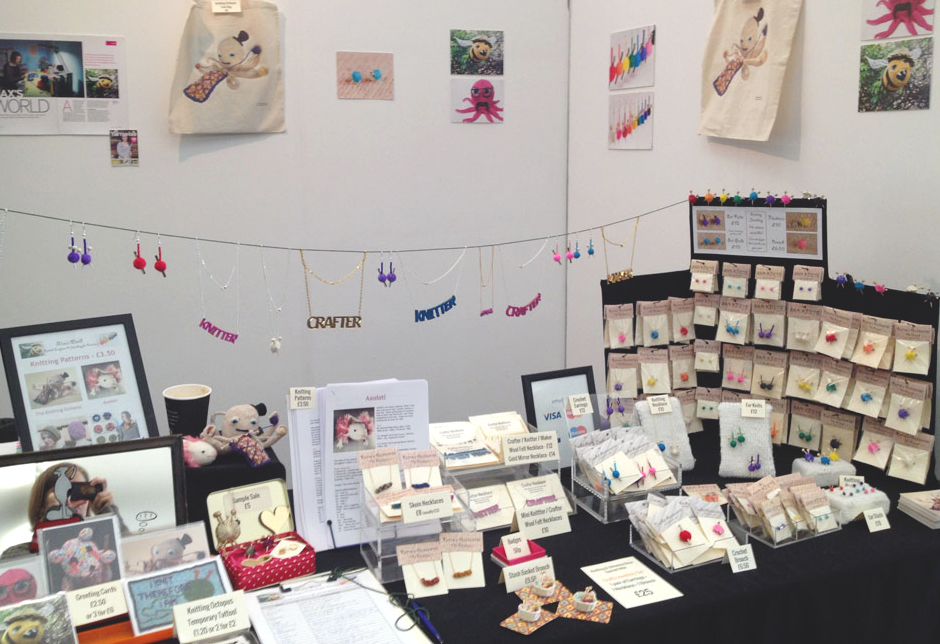 My Max’s World stand at the Knitting & Stitching Show

It’s a very grand venue and feels like being in a wonderland of textiles. The show has a wide variety of stands encompassing all manner of businesses to do with the textile arts. There’s yarn, fabric, buttons, dyes, books, tools, kits and much more to buy. There are also exhibitions, workshops and a fashion show. I was in the Folksy area with Sheep of Steel’s handspun yarn, Miwary’s beautiful and quirky fabric accessories, and Libby Summers’ lovely yarns and knitting kits. It was great to be alongside other designer/makers, people certainly enjoyed the handmade area and I particularly love the yarns from Sheep of Steel – they’re unlike any I’ve seen before! Another of my favourite stands was In Stitch You, where you could get your portrait stitched in 15 minutes – they looked incredible and so unusual.

Miwary’s stand at the show

I met lots of interesting people. A few journalists spoke to me, which has already resulted in two magazine features. I also met some shop owners, who were interested in stocking my products. It was really great to meet some of my online customers too. Everyone was incredibly positive, even when it got a bit overwhelming on Saturday – by far the busiest day. I was really grateful to my friends and family for helping me run the stall, particularly Hannah of Sinbad & Sailor who’s done a fab review of the show too. It really needed two people for a lot of the show.

My knitting needle and crochet hook brooches were a big hit at the show, although I sold some of everything. I also took some new mini versions of my laser cut knitter and crafter necklaces which I hadn’t tried out before. They went really well, so I need to get them online asap! My silliest item was a temporary tattoo of my knitting octopus, it made people laugh so it was worth having even though I didn’t sell many. Sales were much higher than I’d expected, so I was glad to have spent the previous few weeks making crazy amounts of stock!

I would like to do The Knitting & Stitching Show again, although I’m going to wait and see what comes out of it in terms of press, wholesale and online sales because it’s a lot of money for the stand. For me, it was the perfect event as it’s so targeted to knitting and crafting. But I think anybody who has beautiful handmade goods would do well, because the visitors really appreciate the skills of craft and making.

Apply for the Sheffield Print Fair 2021

[…] you want to know more about the event, read our review of the Knitting & Stitching Autumn 2013 Show by Folksy seller Max’s […]