Popular Posts
Buy Less, Buy Better, Buy Handmade
Craft Fair Secrets – How to Make a...
How to take product shots on your phone
How to sell more at markets, craft fairs...
Craft Fair Secrets – How much stock do...
How to choose the right social media channel...
Meet the maker: The Cornish Coaster Company
Craft fair inspiration – big ideas for small...
Meet Sara Tasker from Me and Orla –...
The best Instagram hashtags for craft and handmade
How to find your confidence as an artist...
10 fun gifts for teachers to make with...
The best Instagram challenges for makers & why...
Craft Fair Secrets: Not sold much? Here’s why...
Everything you need to know about tax if...
Meet John Bloor – the printmaker carving beautiful...
Home Seller TipsCraft Fair Reviews Trade Show Review: Spotted at Top Drawer 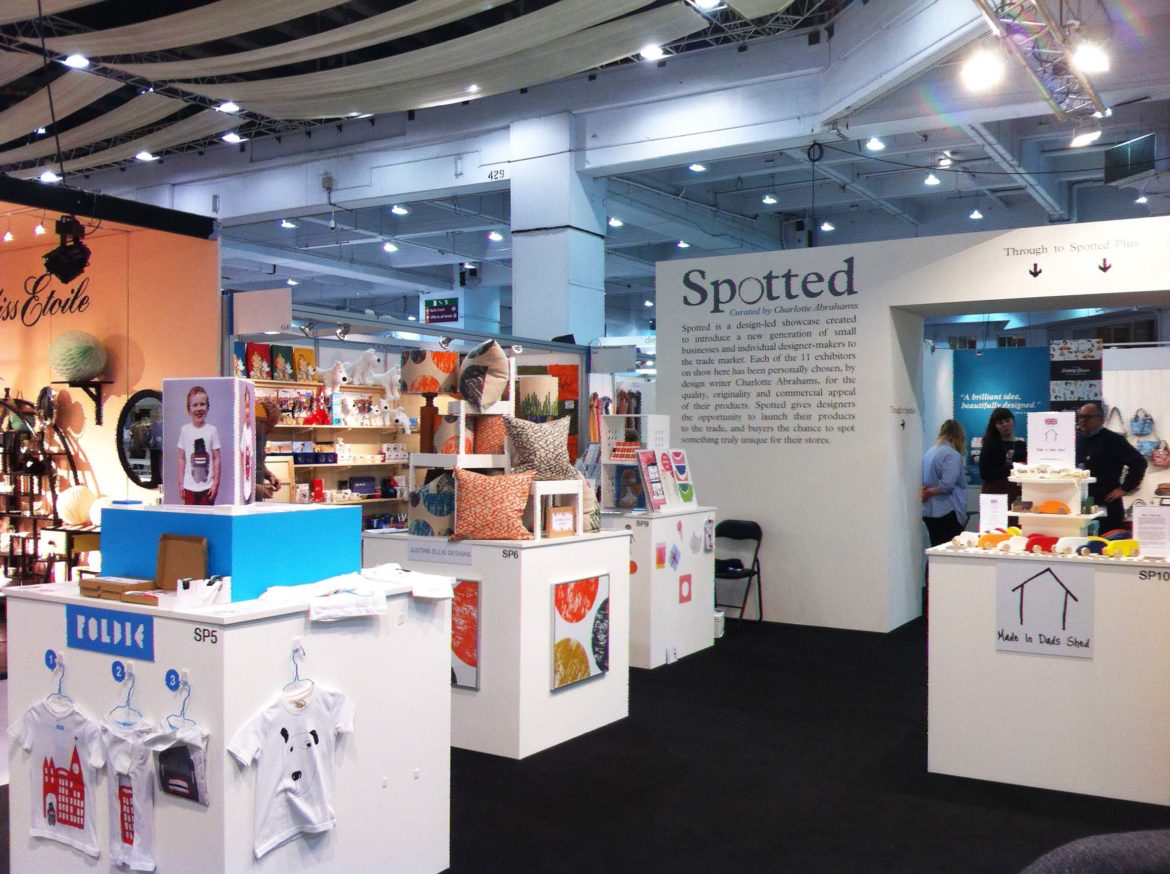 If you’re a designer or maker looking to sell to shops, exhibiting at a trade show can be one of the best ways to get in front of buyers. But with multitudes of shows, options and prices, picking the right one can be daunting… and expensive. Earlier this month buyers and sellers came together for Top Drawer, Craft and Home – three shows all co-located at Earl’s Court. We asked three Folksy sellers who took part to share their experiences. Here, Francesca from Mrs Eliot Books guides us through Spotted and shares her tips…

(Follow these links for reviews of Craft by Katie Spragg, and Home by Lianne Mellor)

Trade show: Top Drawer ‘Spotted’
Reviewed by: Francesca Iannaccone from Mrs Eliot Books
Sectors covered: Gifts and stationery
Dates: 12-14 January 2014
Venue: Earls Court, London
Cost of stand: approx £470+VAT (for the Spotted section)
Size of stand: 1 metre cube plinth
Who were the buyers:  From big London stores to out of town independents
Organisers: Clarion Events
Footfall: 13,000 according to the marketing material
Orders: Yes!
Would you do it again? Undecided 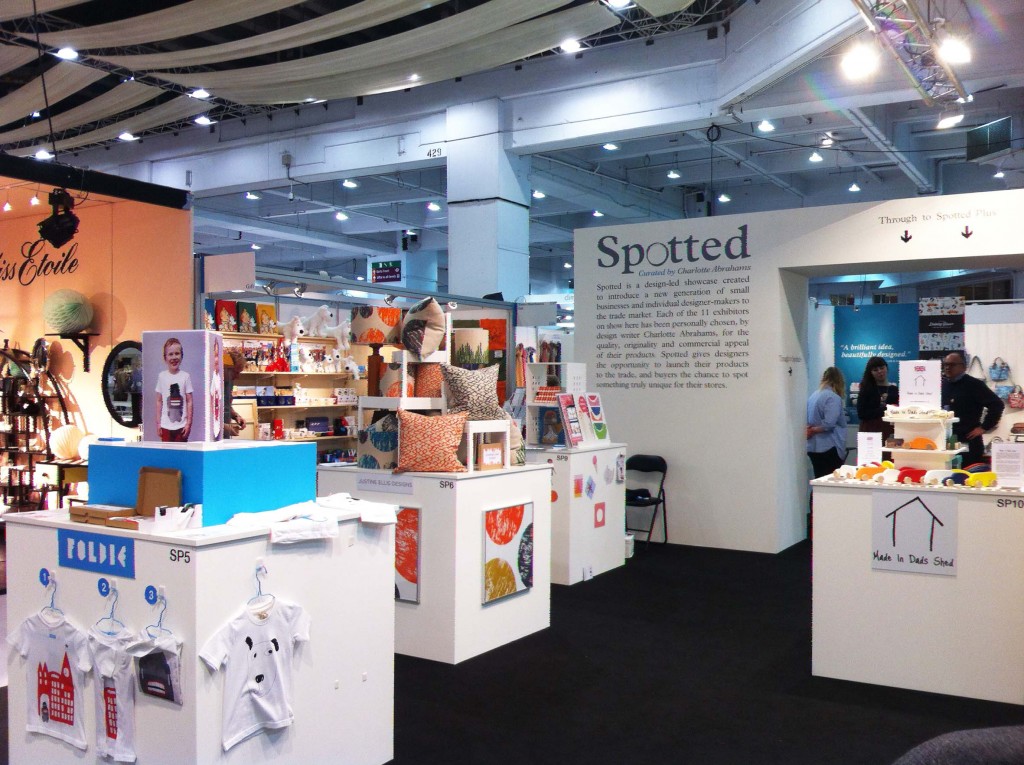 The Spotted section at Top Drawer

So for me, Top Drawer kind of fell in my lap when Charlotte Abrahams, the organiser of the Spotted section, contacted me to ask if I’d like to take part. Spotted is the area for newbies or companies who have never done a trade show before. It’s a great opportunity to see if it works for you, without spending the big money on the big stands. The good news is the organiser found me on Folksy (some people were discovered via Twitter), so she looks around everywhere for possible new exhibitors. And we were all different: Justine Ellis (who’s also on Folksy), Made in Dad’s Shed, Helen Round, Petra Borner, Witshop, Foldie, Meryn, Wick & Tallow, Rhian McLaren, Studio Scrase.

When I first got the email I was anxious! I’d been to Top Drawer many moons ago when I was first starting out and it looked like such a professional show, I wasn’t sure if I’d fit in. But when I emailed a couple of people who had already done it, they were very encouraging and recommended doing it. 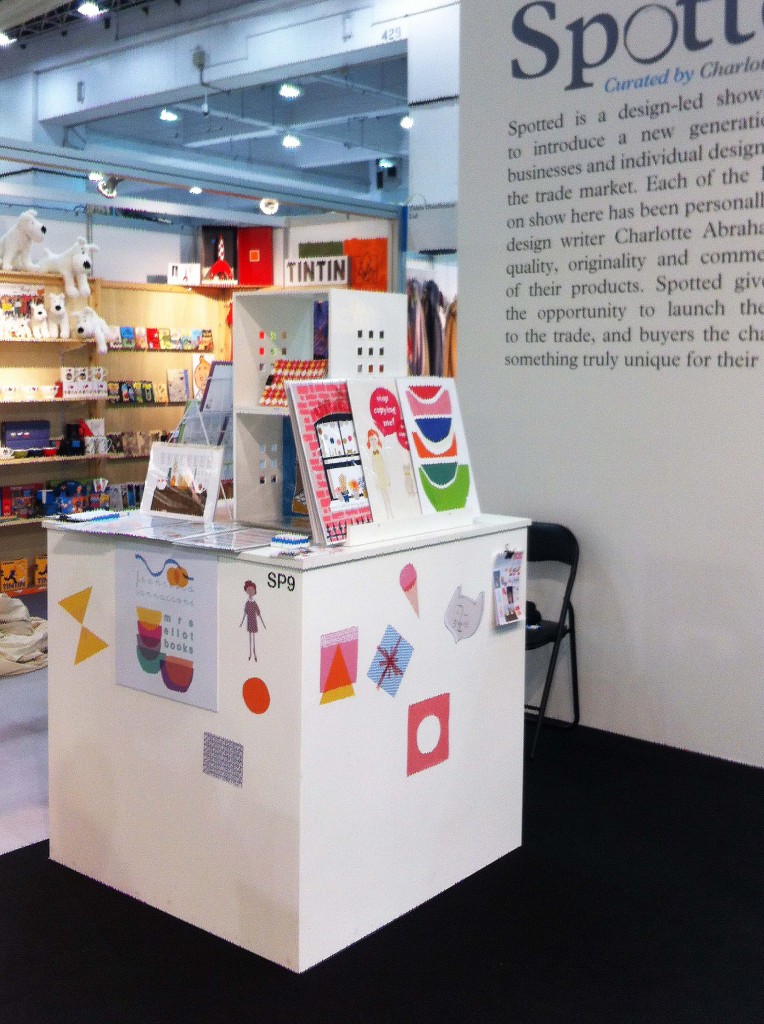 Since the stands are pretty small, Virginia from Roddy & Ginger recommended I build up. So I had a good scour online at previous Spotted exhibitors’ stands and decided to get a couple of white boxes from Ikea, a ledge to stand my prints in and a card rack. That way there was interest at all levels and all the way around, and I could arrange things creatively.

It was quick and easy to set up, I managed to hop on the tube with just a big suitcase and my Ikea stuff ready to assemble. But if you had any more than that, you’d have to drive or get a cab. People had come from all over the UK, crashing with friends or at a local hotel. Some people built on to their stands with a specially designed display. Witshop for example had a great stand – I didn’t see them assemble it but it was beautifully designed to feature all their different products perfectly. And the proper pricier stands were like little shops, with interiors that had been designed and built by the Top Drawer builders. 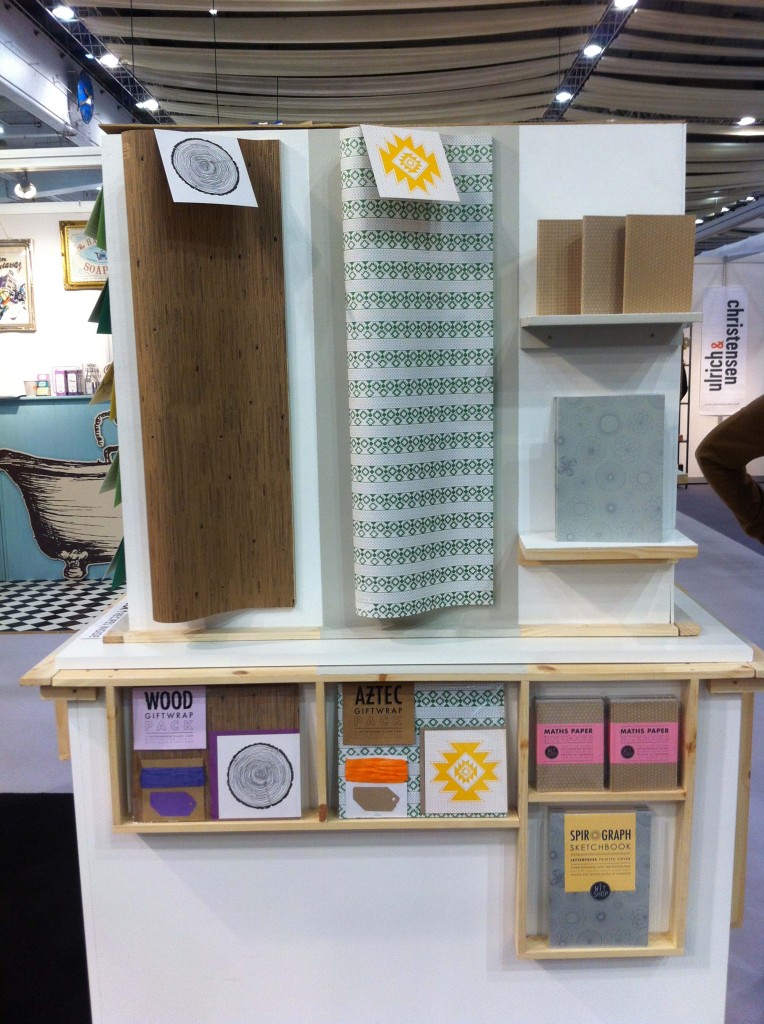 I deliberated a while over what I should get for my stand promotion-wise. Printing catalogues is so expensive that I opted for double sided postcards instead with a selection of images and info, plus a price list. I would recommend a price list with pictures though, as these seemed to be very useful for buyers to take away, and I was very impressed with the simple order forms Donna Scrase from Studio Scrase had made up, where you could just tick what to order, instead of scribbling everything down in an order book.

The venue is huge! It’s very well lit (too bright for me actually – after a couple of days I got one of my Ikea headaches!). We were in a big, open, sociable area which encouraged people to come in and walk around all the stands. Spotted Plus (people who had been in Spotted last time and had paid a bit more to return) were a bit more separate, and some of them weren’t so happy with their footfall. They had a chat with the organisers and the next day some things had been moved around and their footfall was much better. If you don’t ask, you don’t get! 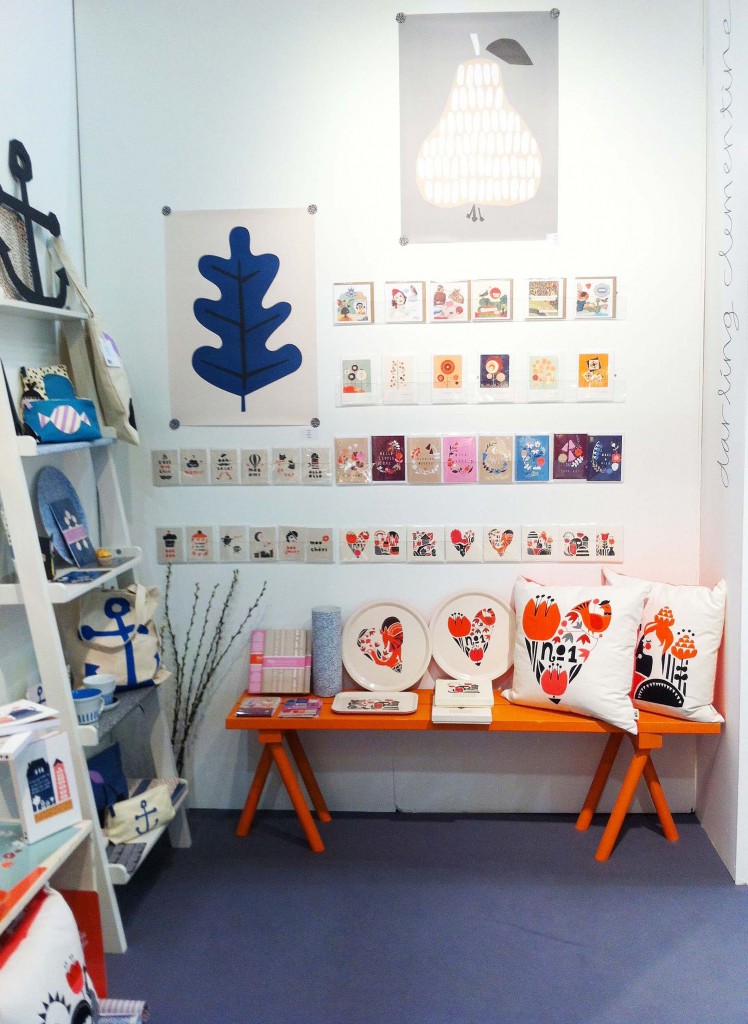 All the buyers were there. We saw people from John Lewis, Anthropology, the South Bank Centre, V&A etc. The only thing is you are in a special section right in the middle, which is brilliant, but it’s possible you could be missed by buyers coming to a specific section. If you sell stationery and you’re in the stationery section, you will be seen. If you’re in the Spotted section, you could get bypassed by the buyers with tunnel vision. It’s massive, and I can understand some buyers just want to get in and out. Some of the exhibitors said next time they might shell out for a stand in the right section instead of doing Spotted Plus (the next rung up). The competition is enormous though – the greetings card area alone was crammed full of beautiful companies big and small: 1973, Urban Graphic, Lagom, Petra Boase, Art Press. Anyone who is anyone is there. But the show is well marketed, with opportunities to get into the directory and add your details to the website. I imagine Top Drawer has an enormous mailing list.

Sales were good. I go into any sale/show just hoping to break even, so anything else is a bonus! I got some new retailers and was asked to contact some other ones. For my first trade show I was pleased with the outcome. People seemed to order very quickly, like the world was about to end. They would get everything down off my stand, move it all around and order fast. Afterwards it was like rebuilding after a tornado had hit. We all made sales and had lots of enthusiastic chats with people. Out of all of us in the Spotted section, I think Witshop and Studio Scrase did very well. Classy, simple designs and a cohesive collection and product range. 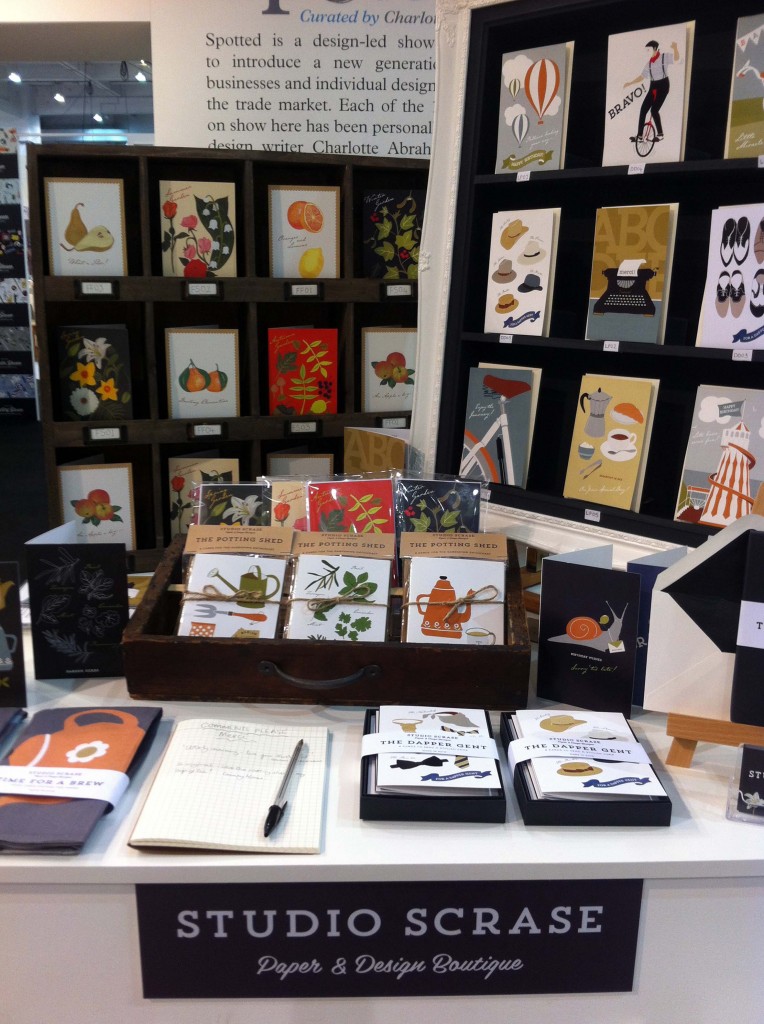 Top Drawer is expensive, even in the Spotted section. Firstly, they offer very expensive insurance which they expect you to take out. Don’t! There are cheaper options such as signing up with AIR and getting their free insurance, or theeventinsurer.co.uk. You also have to factor in travel (even being in London my Oyster card took a battering) and accommodation. Bring your own lunch too – food is twice the price as it is outside the venue. 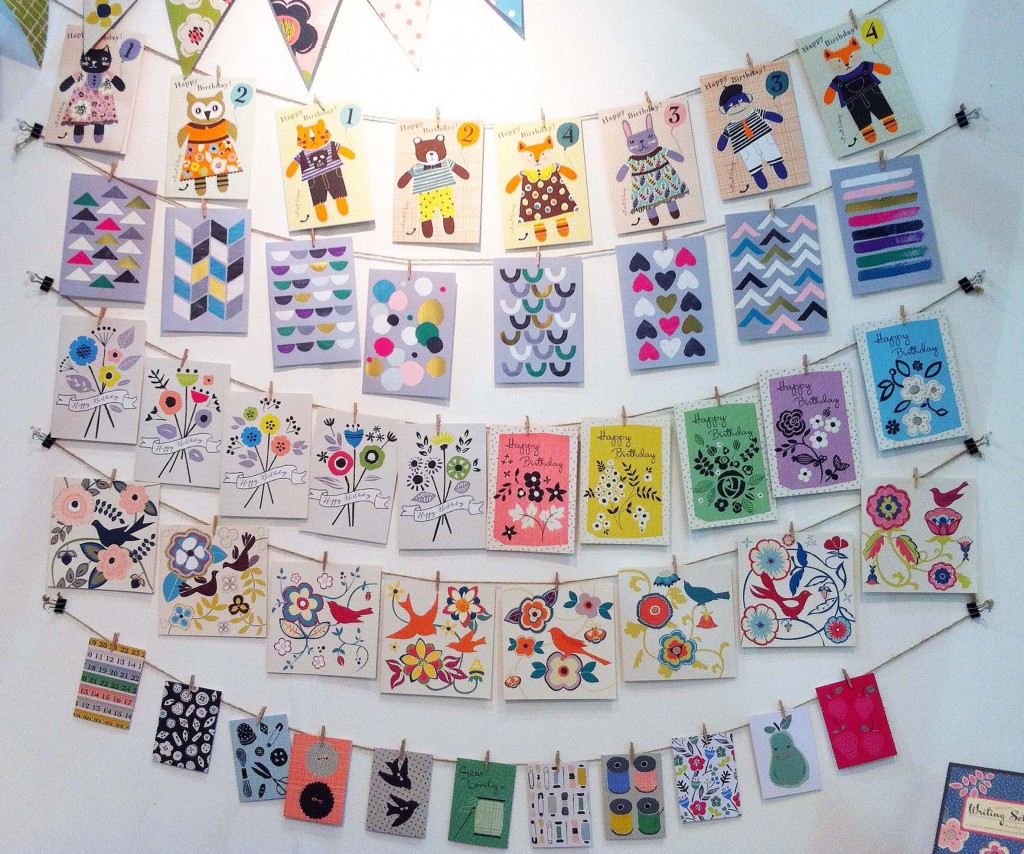 If you are offered a Spotted stand I would definitely recommend it as an entry into trade shows. I could never have paid the £1,500+ for a regular stand so it was a great opportunity. The people were lovely too – it’s great to meet like-minded souls, swap tips and support each other. Would I do it again? I would if I could, but you only get one go at Spotted. I would do Top Drawer if my business was much bigger and could handle the outlay.

A good and honest post. Thank you. It’s been useful to me – especially about the insurance.

Hi Francesca, this is truly a great post and review, it gives clear insight as to what being an exhibitor at a large trade show is like.

Thank you for sharing this, the feedback is greatly appreciated.

All the best on behalf of the entire Top Drawer team.

Really interesting article, thank you for sharing your experiences.

Tinkering with the idea of trade shows so this gave us a great insight!

Really enjoyed reading your review, great tips and very honest. Very tempted to give it a try myself now! Thankyou :)

A great article and thanks for putting my cards in there too! I wish I’d known you were there I’d have dropped by. I’m into my 10th year at tradeshows and I’m still learning!! Good tip about the insurance too Xx

Thank you so much for this really useful and informative blog post. It was a massive help for me preparing for Spotted, and I had a great show.

I have been looking into doing my first trade show and spotted would be fab. How could we get involved? How much time do you think one needs to prepare adequately for a trade show?

You have to be invited to take part in ‘Spotted at Top Drawer’, Mary. It’s curated by Charlotte Abrahams and you can read more about it here http://www.topdrawer.co.uk/visiting/spotted/.

But you can apply to be a general exhibitor at Top Drawer or the other trade shows. Some of them have sections designed for new businesses where they offer stands at reduced prices. See their websites for details.