From her studio in the wilds of Yorkshire, Jane Tibbetts (or rather her alter-ego Chatty Nora) draws and prints a wonderful world of words where Dr Seuss mingles with Jane Austen, William Shakespeare and IT Crowd. We talked to her about her life and inspirations, while trying not to swoon over her new, envy-inducing, studio, screen-printing press and architect’s plan chest… 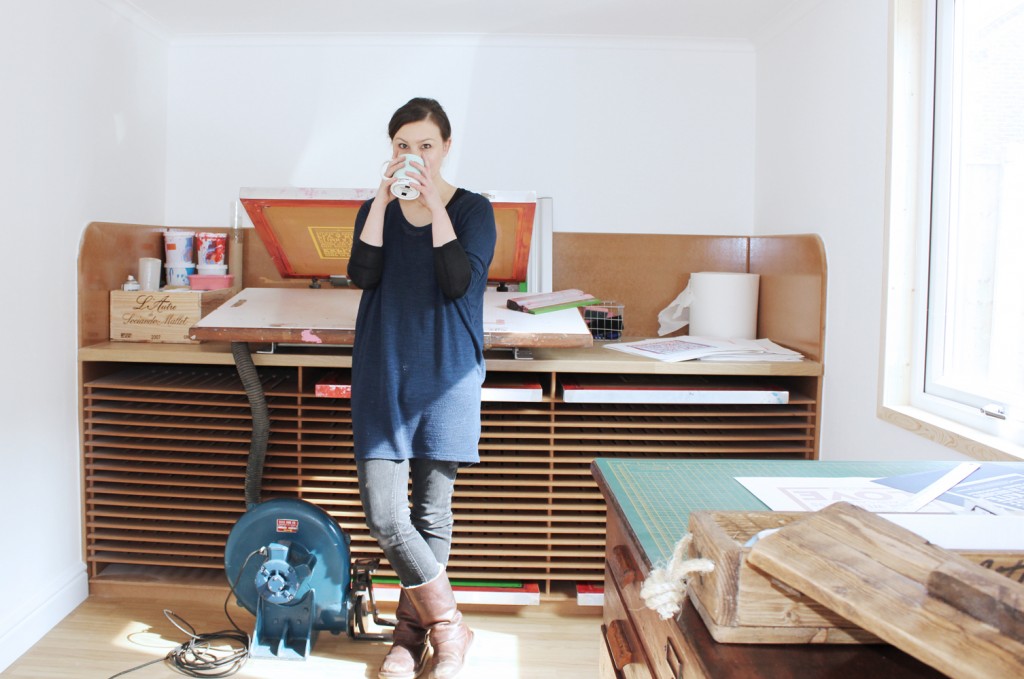 Can you tell us a little bit about yourself?
I’m a graphic designer working under the pseudonym name of Chatty Nora. Most people automatically refer to me as Nora but in reality my name’s Jane. I prefer Nora, I rather like being incognito! Since the arrival of our daughter last June I’ve been working from home (the attic to be precise) in the tiny village of Towton. We share our home with a completely bonkers cocker spaniel named Henry, and an aged agoraphobic cat name Louie. 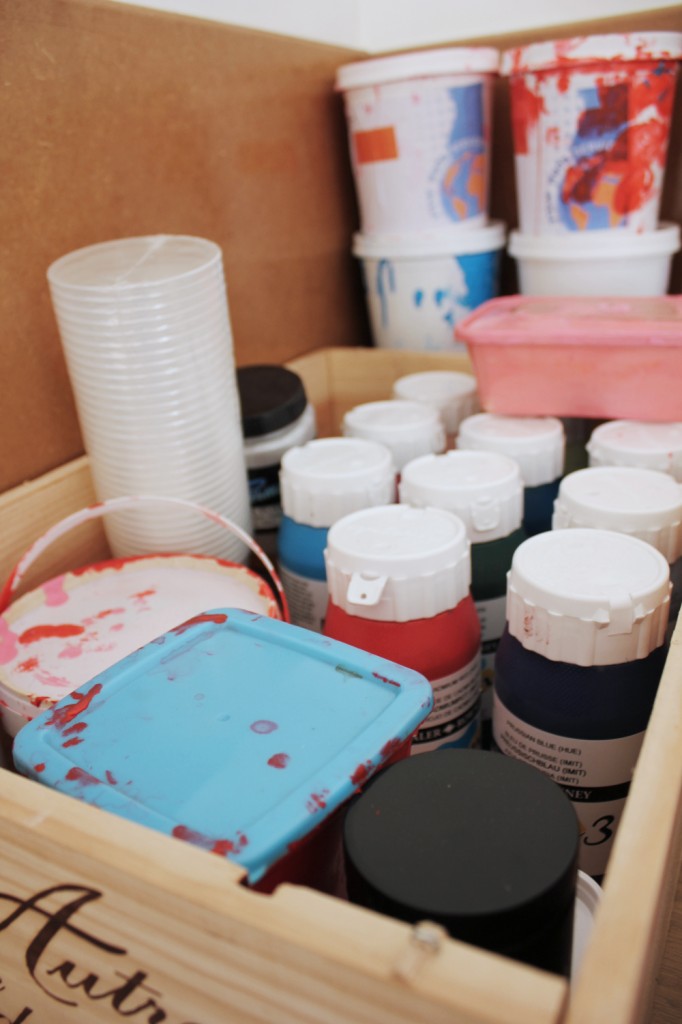 If you’re Jane, who’s Nora?
Chatty Nora was my parents’ cat! She was a little ‘chat noir’ and eventually became known as Chatty Nora. For reasons unknown she embarked on a hate campaign against my father which ultimately ended with her doing a huge poop on his pillow! I don’t know why I chose it for my alter-ego name – it’s a bit weird really! I should probably make it clear right now that I don’t approve of going to the toilet on people’s pillows, but you have to admire her spirit. Naughty kitty! 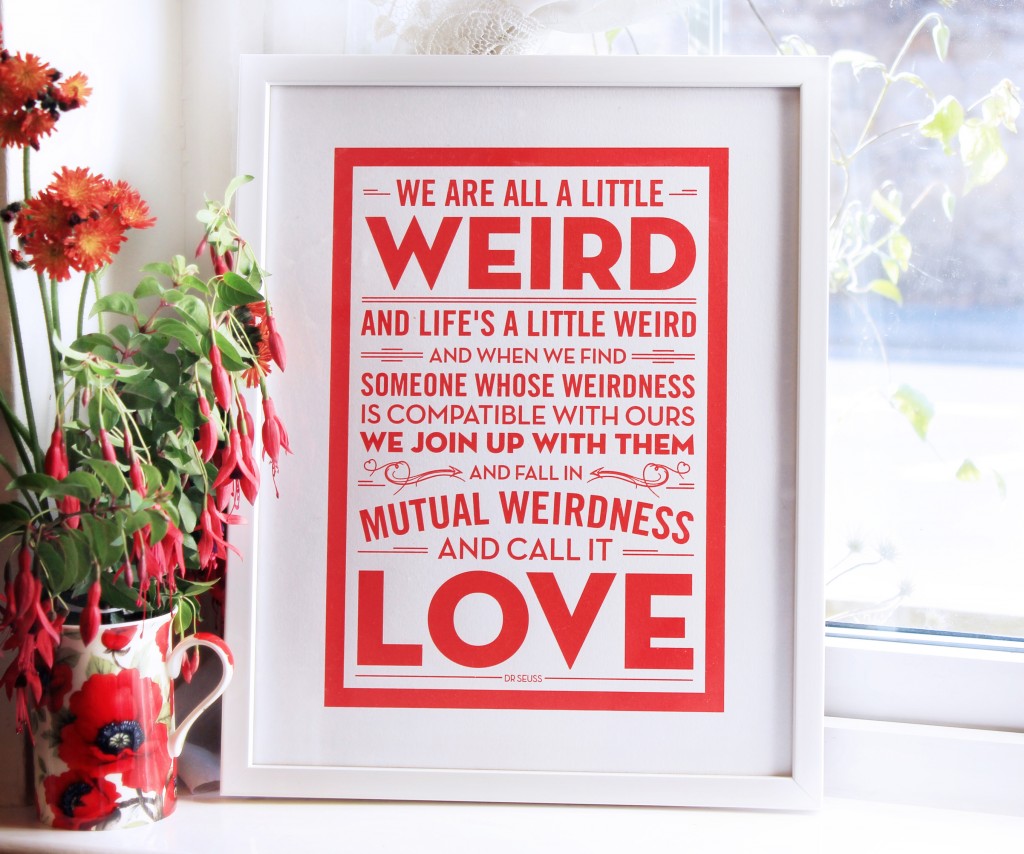 What or who inspires you?
I have so many inspirations for my work, from authors (clearly Dr Seuss is a big influence!) to fellow graphic designers and typographers. I like to take inspiration from vintage typography – it’s so beautiful and I plan to expand a lot more on that design route now I have my own screen print press. I am completely in love with the work of Tag Team Tompkins, a mother-daughter team from Kansas – they’ve inspired me to try and learn modern calligraphy. 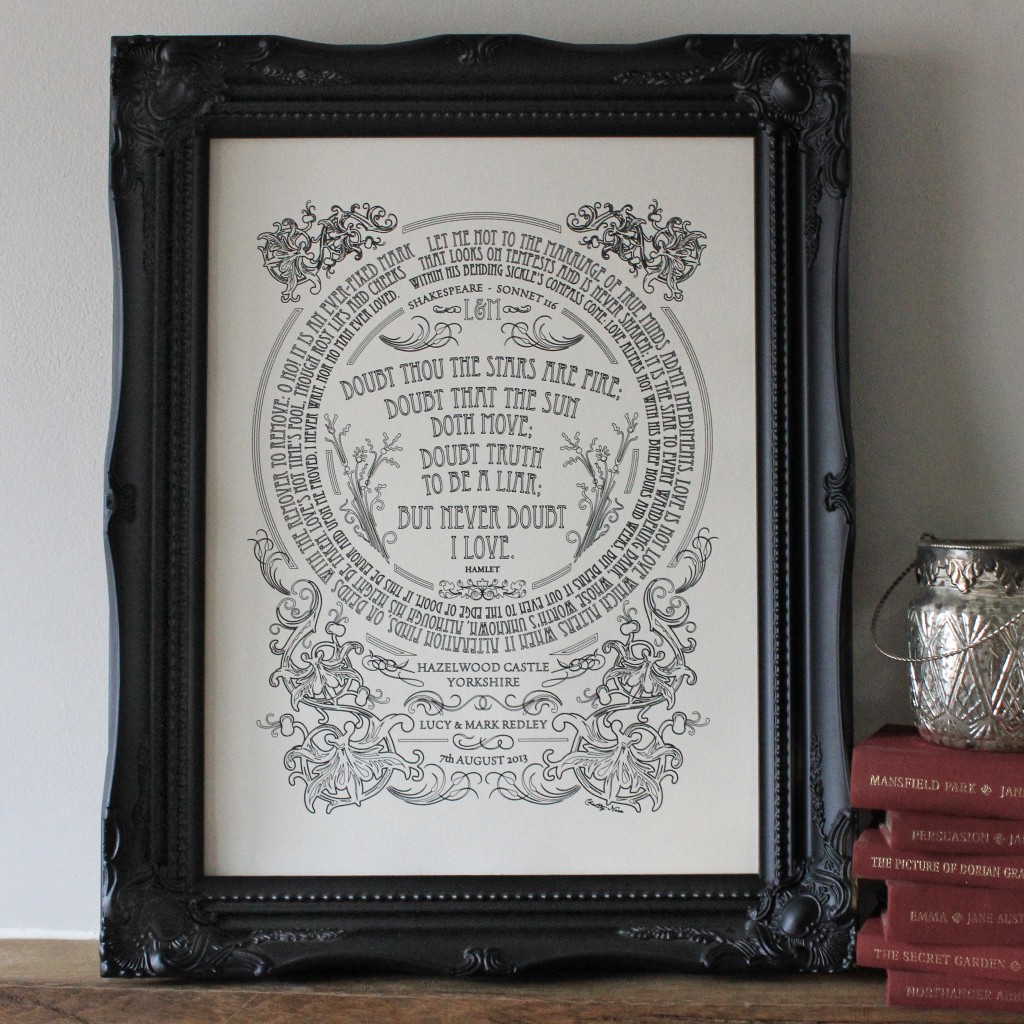 Where do your ideas and mottos come from?
Most of my ideas and quotes comes from literature, I love reading and some lines just stick in my mind. The line for my favourite card ‘I Like Your Face’ was used after I spotted it written in a friend’s birthday card. It made me smile so I thought it might make other people smile too. It really can be that simple! I try not to have anything too serious – if you’re choosing the option of typographic artwork for your walls I find it’s best to keep it lighthearted, a wall of sage advice can feel a bit judgemental!

All your work is either drawn in pen or screen printed. Do you think it’s important that each piece is unique?
It’s not so much about keeping each item unique but more that I really enjoy producing my designs myself. When you work as a commercial graphic designer you’re so used to designing an item and sending it to the printers that it’s a real indulgence to be able to complete the process myself. I could buy a fancy printer I suppose, but it just doesn’t appeal to me right now. 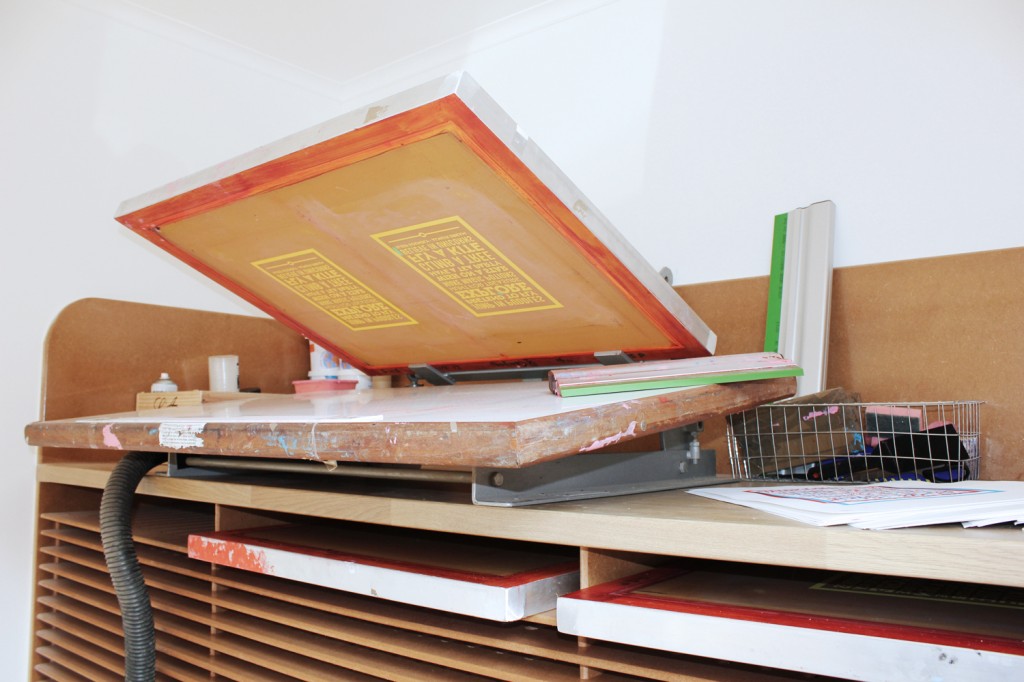 We’re fascinated by your pen-drawn work. Can you give us a clue how you do it?
After moving to Yorkshire I had a small bit of deskspace in a sign and graphics studio. I had just set up Chatty Nora when they kindly said I could use any of the resources they had to help with products for my Folksy shop, so I started tinkering away! When I produced the first piece (that actually looked okay!) I very excitedly messaged an old colleague a photo and he immediately replied “never tell anyone how you do it!” I have followed his advice – I think people rather like the fact they can’t work it out! 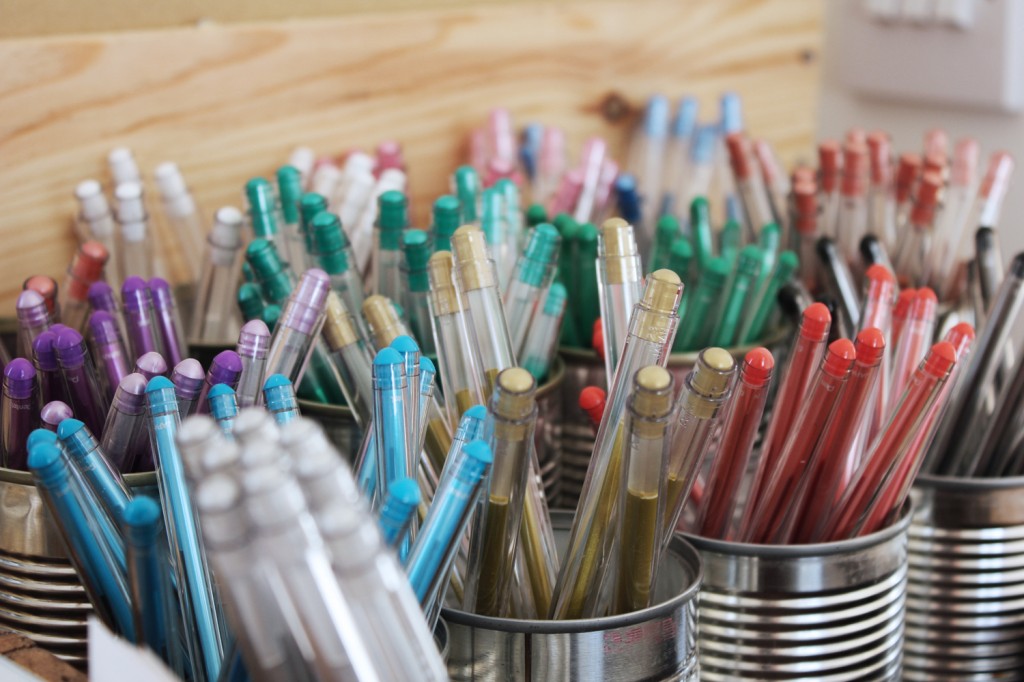 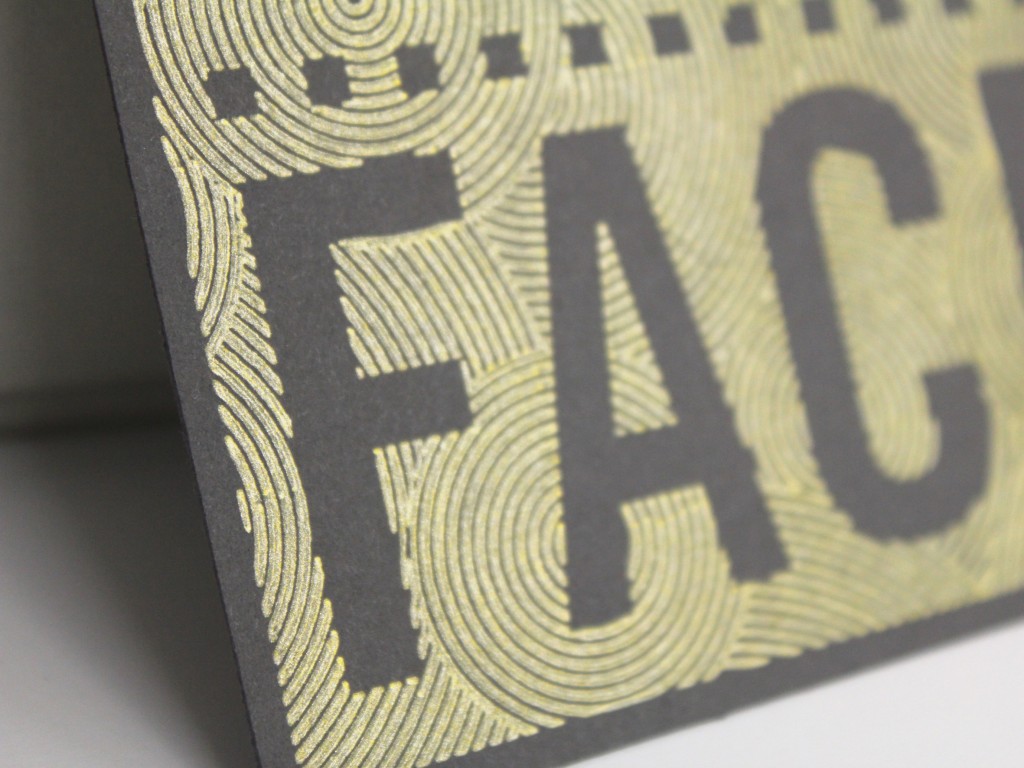 Assuming there is any spare time in your life, how do you fill it?
I haven’t had a chance to work on anything new since my daughter was born last year, so I’d actually really enjoy a little time to come up with some new designs. My other favourite pastime is reading. I find that’s more compatible with looking after a newborn, as you can dip in an out of a book quite easily… unless it’s by someone like Dostoevsky, that takes a bit of concentration!

You worked as a graphic designer in London for 15 years. What drew you away from the big smoke and up to the wilds of North Yorkshire?
I met my boyfriend (who is a Yorkshire-man) when I was still working in London and it became very apparent very quickly that getting him to move to the city (or the south!) would be a battle. It wasn’t a problem though because by that time I had started to feel like I was done with the big smoke – it had been 15 years and it had begun to loose it’s appeal. So I decided to make some big lifestyle changes and move up here. It was worth it and although I’ve never been busier I’ve also never been so relaxed or content with my life.

Do you have a favourite font?
I have lots of favourites but I am a sucker for anything by House Industries. They are all beautifully designed and have a lovely retro feel to them.

Can you describe your workspace/studio?
I’m currently between workspaces. We started building a garden studio back in January, which is an amazing space. We’re at the final stages of completion now (just waiting for some gorgeous desks to arrive) and I can’t wait to move in. I’ve managed to find a vintage set of A0 architect’s drawers to store all my card stock in and have spent months collecting pieces of artwork by all my favourite artists for the walls. It’s going to be a great space to work in. In stark contrast I’ve spent the last 12 months working out of our little attic! It’s very cramped and I have paper and poster tubes stacked everywhere. 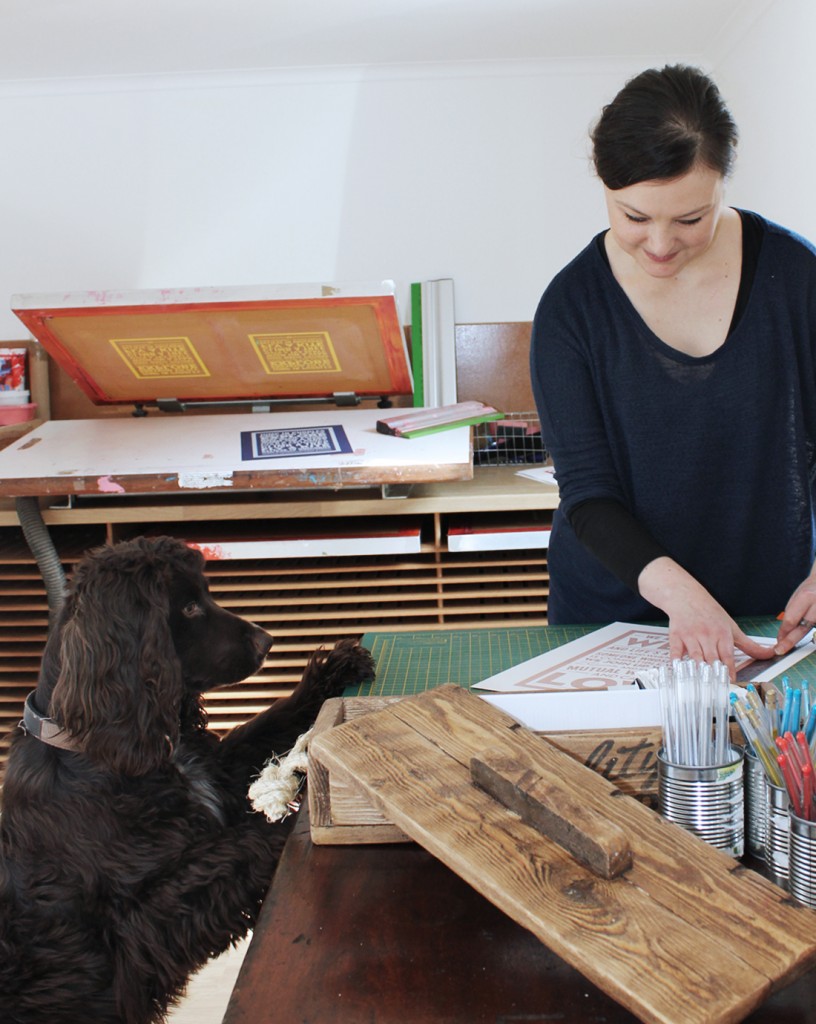 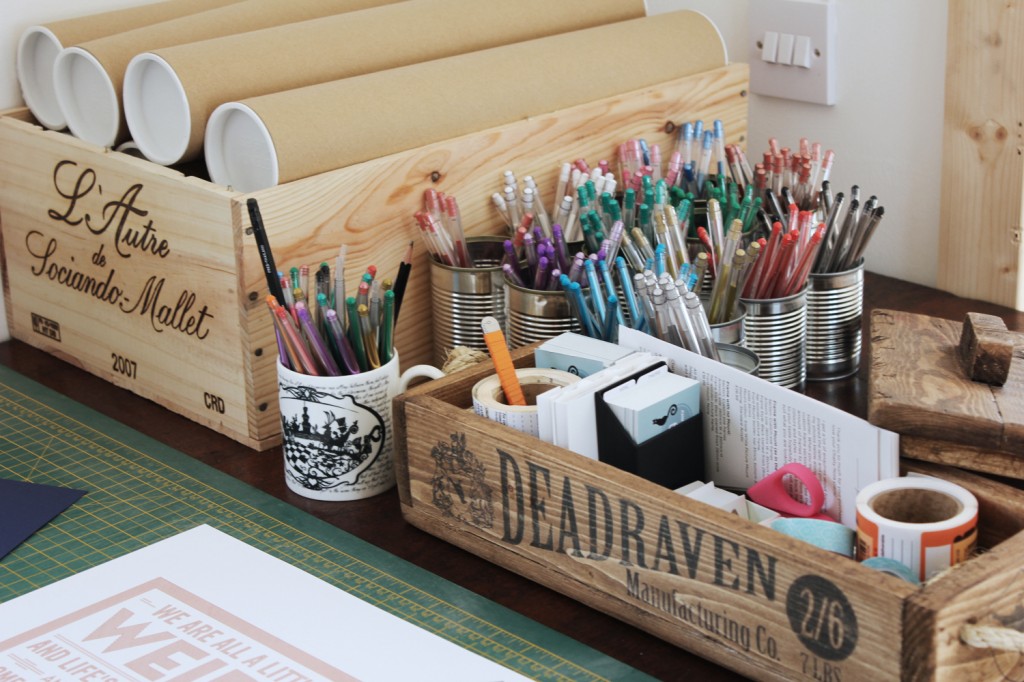 You say your dream is to have a library in your house. Which book would be first on its shelves?
Hmmm… that’s a tricky question. Every time I start to give you a title I think of another! Maybe The 13 1/2 Lives of Captain Bluebear by Walter Moers, but then I think it should be a classic from Jane Austen, or Neverwhere by Neil Gaiman because it’s just so brilliant. It’s too much… I can’t pick! I’d have to move them in batches, so there was no ‘first place’. 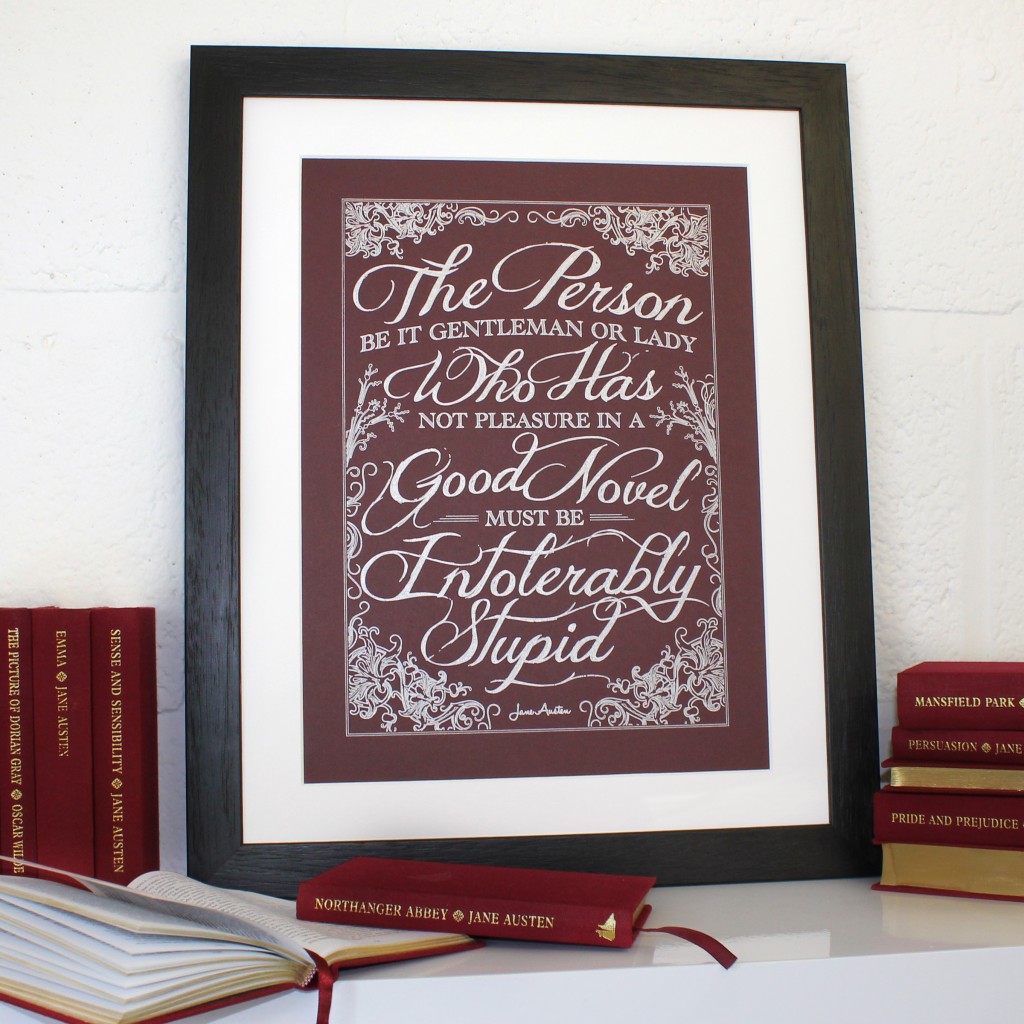 Finally, if you had to pick one motto to live your life by, what would it be?
Probably, “Do what’s right rather than what’s easy” – there’s nothing worse than feeling bad because you took the easy option. Urgh… that’s so serious though, maybe better to keep it simple with, “Stop being sad and be awesome instead.” That’s better! 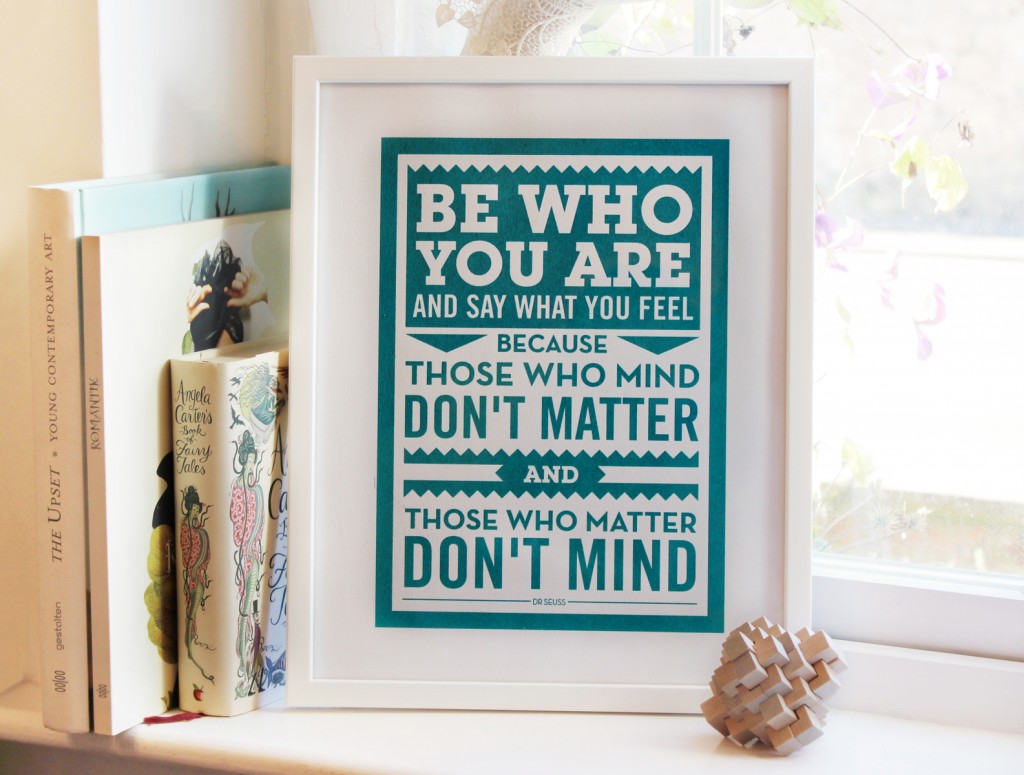 Be Who You Are, hand-pulled screen print, £17, by Chatty Nora

Meet Etchable – delightful designs made in the...

By Shelly Lee – ceramics that are as...

Zedig Design – Meet the designer behind this...

Great interview Jane! Lovely to see an artist local to me (and as obsessed with typography as I am) who I love featured in Folksy’s great Meet the Maker series. Nice one!

I was so happy to find this interview! I bought one of Chatty Nora’s pieces as a wedding present for my sister, over a year and a half ago. We both loved it and I was really inspired by it. So much so that it has influenced some of my own work lately. As a mother of four, I know all too well how difficult it can be to balance creative output with child-rearing, but please persevere Jane- your work is amazing!!!

Lovely interview. I am so in love with your space and that screen print contraption. Beautiful work too. Best of luck to you.

great little interview , meet the maker, very good. I love fonts too ! Way too much infact. Keep up the great work
Simon x

Awesome. So inspirational and I love your workspace too. Your work is incredible I could buy them all! Hope you are very successful.

You are exactly where I want to be – this is a real inspiration to me. Love your work :)

[…] more about Jane and what inspires her in our Meet the Maker interview. Shop Chatty Nora on […]