In June this year I had an email from A Month Of Sundays gallery in Sheffield, asking if I would like to take part in an art project called ‘Pub Scrawl’. I had a vague idea about what it was (as there had been one before a year or so ago), in that it involved art and pubs, so I naturally agreed! Obviously it wasn’t quite as simple as that. The Pub Scrawl project matches ten pubs in Sheffield with ten artists, and each artist is asked to create an installation within it for one day only. The project has been funded by the Arts Council, and artists were asked to perhaps try out ideas that they had always wanted to, but weren’t able to for whatever reason.

My mind raced through loads of possibilities, and top of the pile was donkeys. Yes, donkeys. My art/craft normally is printmaking (mainly linocut), and a recurring theme in many of my prints is donkeys. I’m very drawn to their modest nature and awkward charm. I thought maybe I could get a bit carried away with this theme for the Pub Scrawl and create some kind of donkey-world in my allocated pub, the lovely real-ale boozer The Bath Hotel. 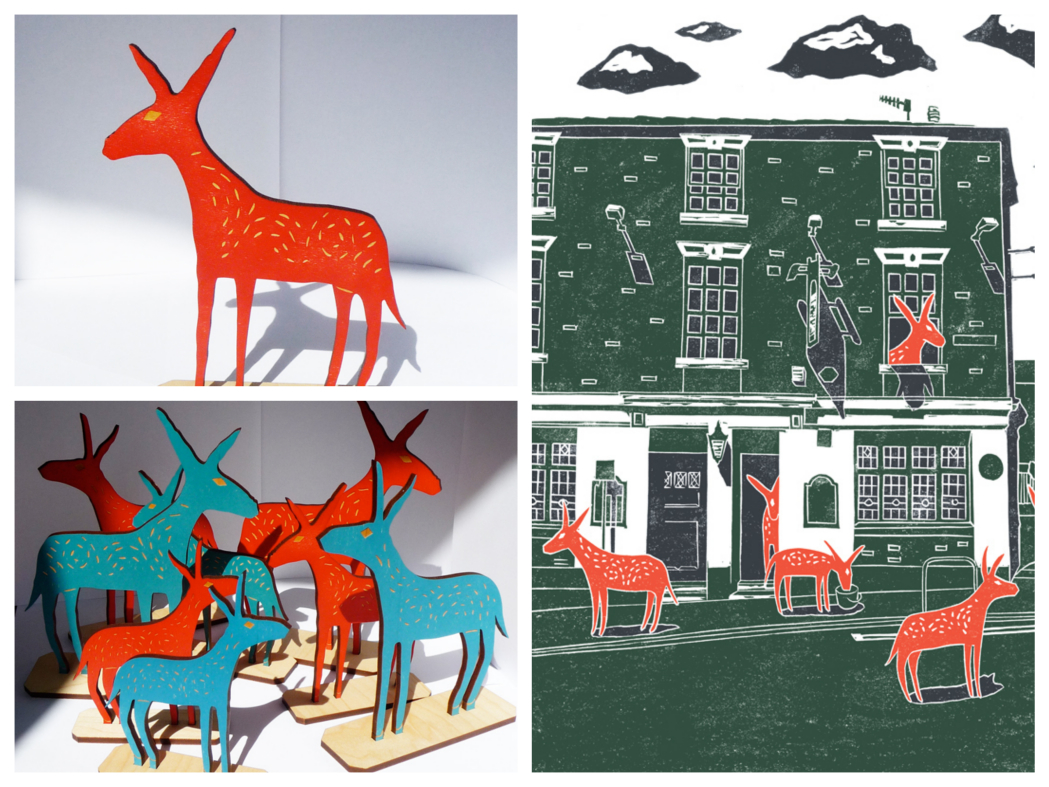 So I set to work. I decided that I wanted 3D donkeys, so I designed several based on my linocut and had 100 lasercut in wood and mdf to be the centrepiece of my display. I then painted them red and blue, had a large tabletop cut to display them on, and my donkey troupe display was complete! I also created a new linocut/screen-print, titled ‘Pub Donkeys‘ showing what might happen if donkeys inhabited a pub instead of humans (which I made with the help of Sheffield Print Club).

This was all I had planned originally. I had a couple of meetings in the pub to discuss plans with the organisers and the landlord (in case they had any objections), and the more I saw the space (the snug bar), the more I realised I could take the ideas a little further. I wasn’t sure how it would go down with the landlord, but I now wanted to put straw on the floor, put in special lighting, and have special music playing, designed for donkeys. The kind landlord, Edd, thankfully agreed. 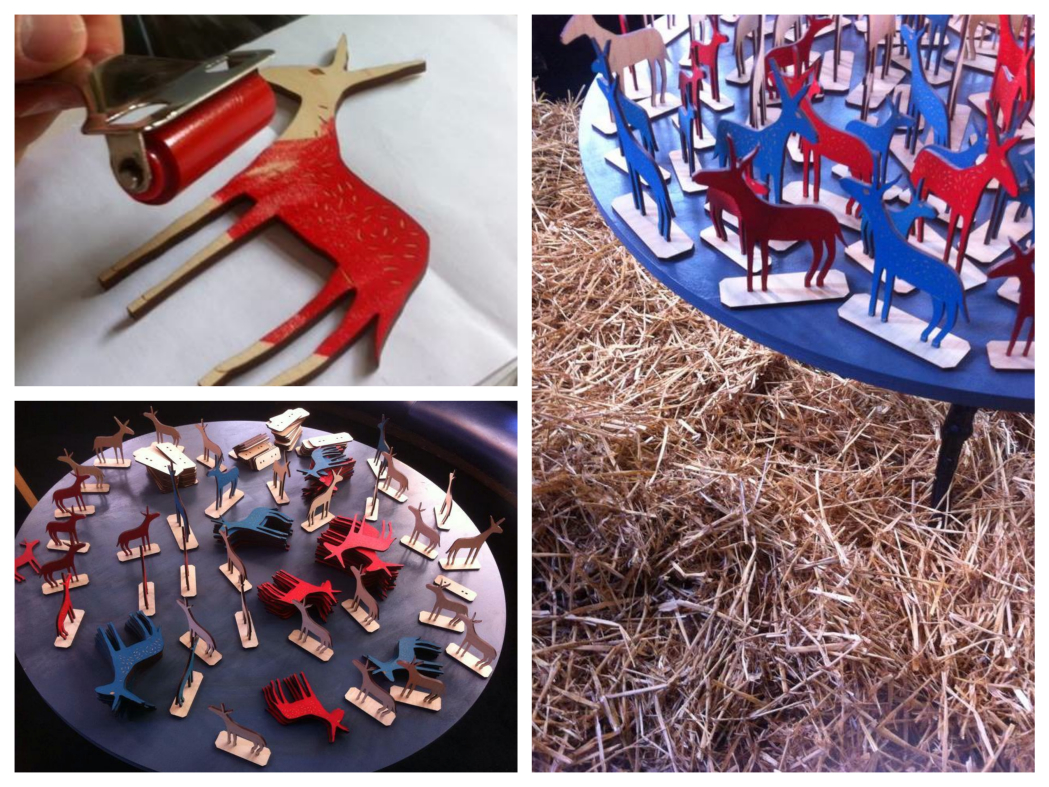 As the project evolved I felt I could do more with the space, and imagined how the pub would look if it was inhabited by donkeys

So, I wrote and recorded some music (I’m also a musician when I’m not printing), bought a big bale of straw, printed 100 donkey beermats, collected up my wooden donkeys, prepared my print, and on the morning of 31 August 2014 headed to The Bath Hotel to set it all up… All very exciting!

Wooden donkeys in position, print framed, straw on the floor (loads of it!), beermats on tables, music set up. Here we go…

Anyone can come along to the pubs in the Pub Scrawl to have a drink and see the art, but they also have guided tours, which prove to be very popular. Throughout the day the pub was filled with excited people, eager to have a nosey at what I had done. 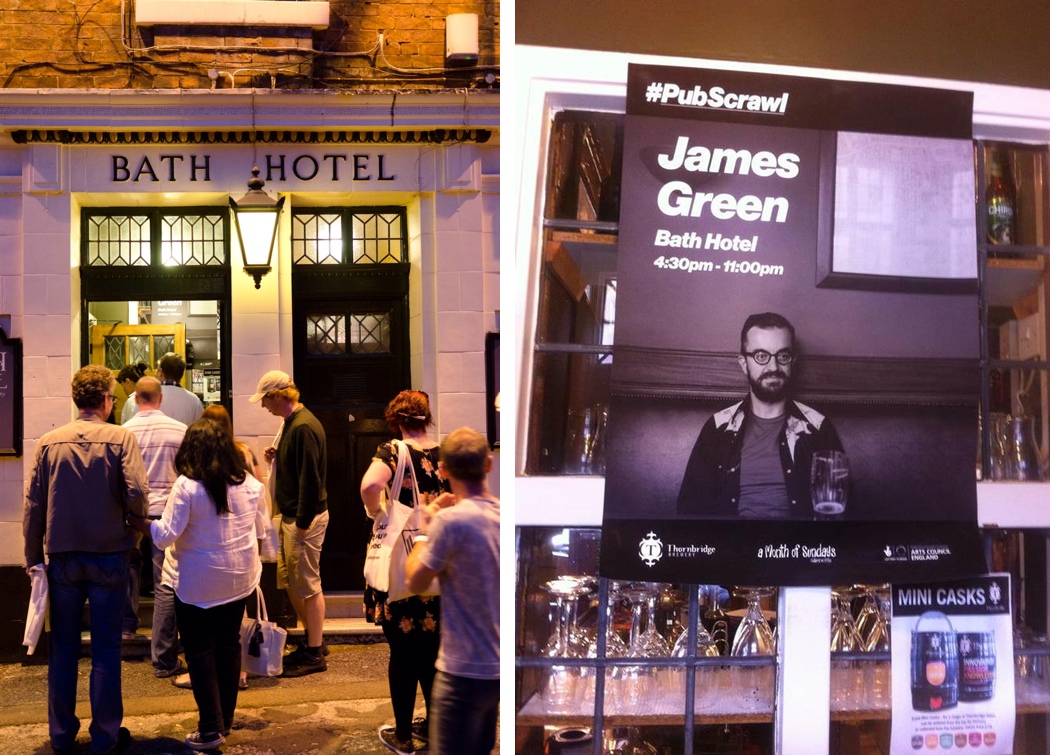 The straw on the floor was the first thing that surprised people. Having a crunch underfoot is a bit disconcerting when you aren’t expecting it. Once people had got used to that, they entered my ‘donkey-world’, and many of them made themselves very much at home.

The event lasted from 4pm-11pm, and it was such a fun day. Time really flew. I spoke to so many people who were intrigued by my installation and who had very kind things to say. It was all very flattering! There were apparently over 1,500 visitors taking part in the Pub Scrawl. It was a shame I wasn’t able to visit any of the other artists’ work, but I heard an awful lot about them from the excited visitors. The other artists involved included the great talents of Jonathan Wilkinson, India Hobson, Nick Deakin, Tom J Newell, Jo Peel, Pete McKee and more. A documentary film crew were on hand all day for the whole event, so hopefully it will fill the complete picture in for me when I see the results!

I’m very grateful to have been asked to take part in this event, and it was so good to see so many people enthusiastic and supportive of art in the the city where I live.

Here’s to next year!

You can buy one of James’ donkeys here >>

The evolution of a craft book by Michael...