Popular Posts
Buy Less, Buy Better, Buy Handmade
Craft Fair Secrets – How to Make a...
How to take product shots on your phone
How to sell more at markets, craft fairs...
Craft Fair Secrets – How much stock do...
How to choose the right social media channel...
Meet the maker: The Cornish Coaster Company
Craft fair inspiration – big ideas for small...
Meet Sara Tasker from Me and Orla –...
The best Instagram hashtags for craft and handmade
How to find your confidence as an artist...
10 fun gifts for teachers to make with...
The best Instagram challenges for makers & why...
Craft Fair Secrets: Not sold much? Here’s why...
Everything you need to know about tax if...
Meet John Bloor – the printmaker carving beautiful...
Home Exploring Techniques Exploring Techniques: Circuit-board cities 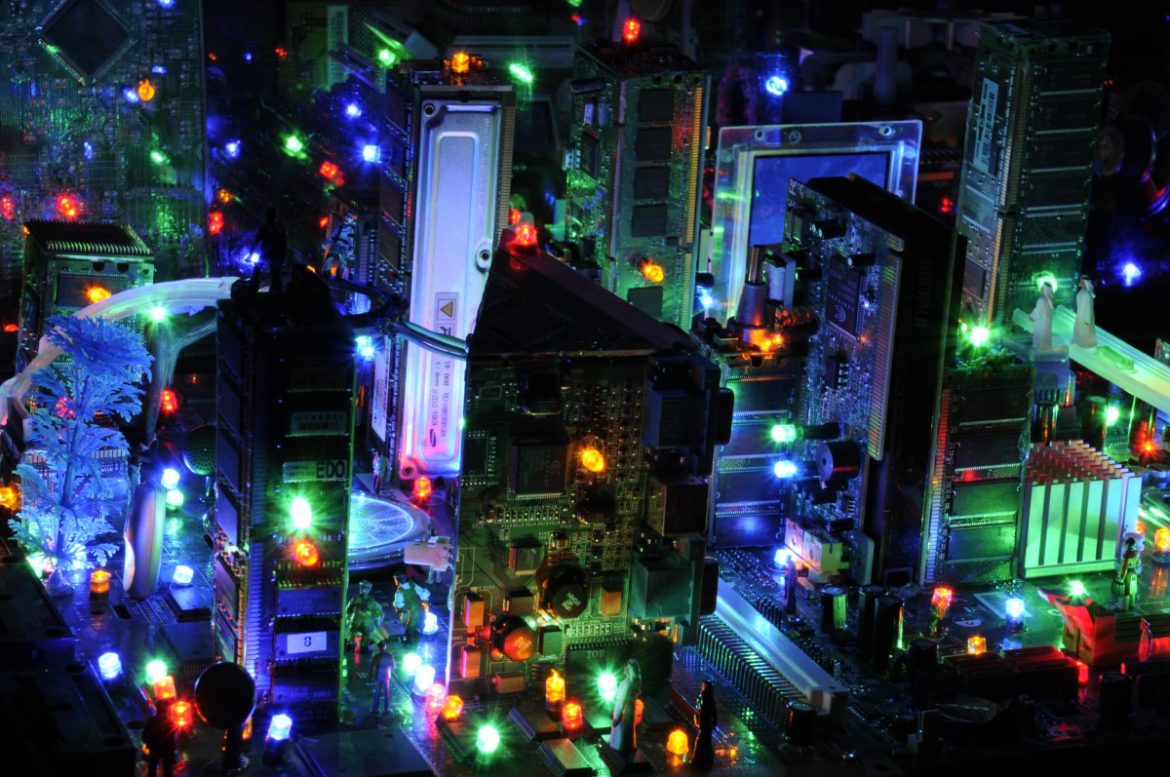 In our ‘Exploring Techniques’ series, stained glass artist Amy McCarthy goes behind the finished piece to uncover the different techniques, methods and materials artists, designers and makers are using to create their work. Here she looks at the amazing miniature cityscapes created by artist Ben Yates from recycled electronics – worlds of the future crafted from yesterday’s discarded technology.

One of the great things about being an artist is meeting other artists and I have been lucky enough to have exhibited with Ben Yates and the amazing recycled micro cities he creates. In his totally blacked-out studio a fabulous miniature world of tiny cities flash and blink and spin and move the teeny citizens about on their sci-fi business. Made from recycled electronic hardware – from PCs to electric photo frames with LED lights – and a perfectionist’s attention to detail, Ben’s work shows how you can take outdated and broken goods and turn them into pioneering environmentally friendly and fun objects. Oh and did I mention they are all encased in Perspex, so you can use them as a coffee table? 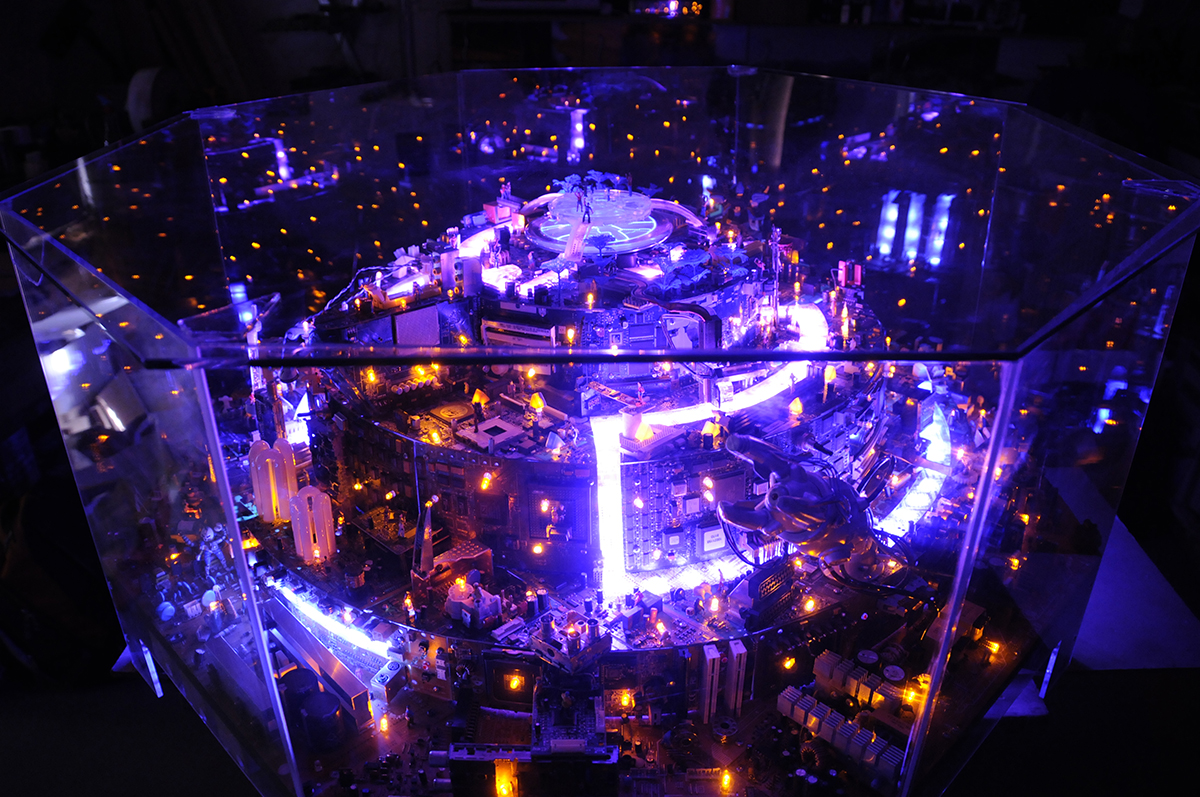 Coming up with original ideas in a world where nothing seems new is no mean feat and it seems that the seeds were sown in Ben while watching the film Tron as a small child:

I saw Tron when I was very little – the graphics and the society within a computer concept immediately appealed to the budding geek in me. Later when I was 15 and I opened up my first PC to upgrade it I was able to take a close look at circuitry. I loved the minute detail, the level of order and complexity – I was struck by how it appeared to be a miniature-scale society.

After that Ben started to collect circuit boards, but with no clear idea of what to make with them, until in 2007 he had a moment of inspiration: “A huge cityscape made from circuit boards would be very difficult to sell due to its size and the inevitability of dust and damage,” he explains. “Then in 2007 I had this flash inspired by my own glass-top coffee table to build a cityscape inside a clear coffee table, so the artwork changes from being a liability to a practical piece of furniture. 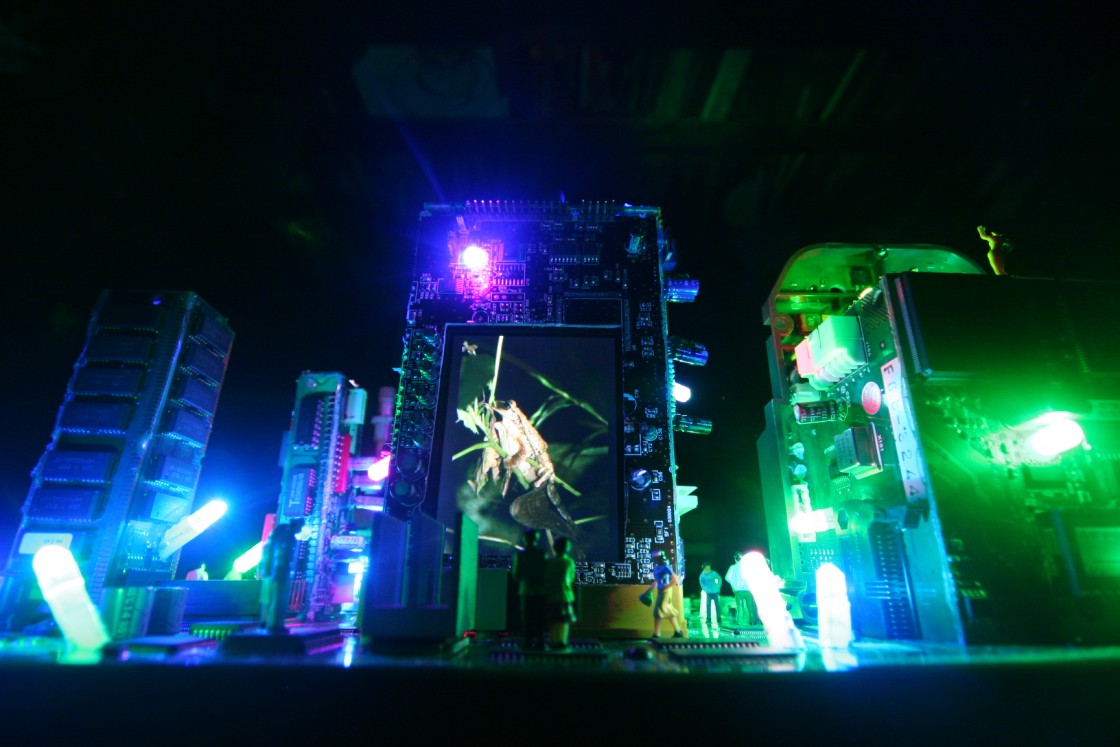 Ben spends a long time making his cities –  seven months in the case of this year’s Electri-City Mountain, built inside an octagonal table 1m across. But all this hard work is getting him noticed: this summer he delivered one of his table cities to Intel in London, who are enjoying it in their Futures department.   The cities look so complicated to wire up and make work, but Ben insists it’s actually all smoke and mirrors: “The boards I use are all dead and the lighting is mostly provided by strings of LED Christmas lights, weaved underneath the city ‘streets’ and inside the buildings.”

Like many of us arty types there are children to look after and time in the studio is limited, but Ben is working on a city built into a metal framed computer desk that contains a fully working computer and he has another plan to make cities with kinetic elements –model trains and LED marble runs. 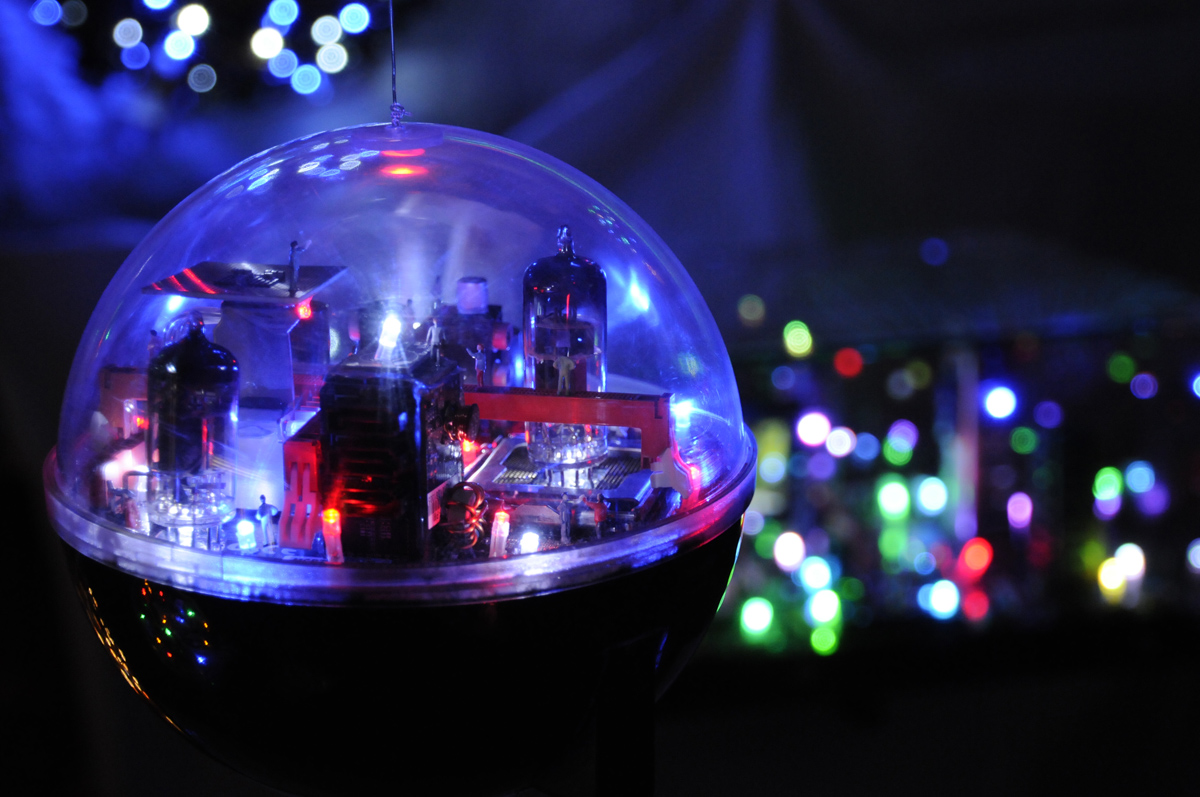 If you want to see the magical world of Ben’s Electri-Cities and step into his dark room installation, look out for Devon Open Studios events – or read more about Dan’s work on his website www.photocubism.com

More about our columnist: Amy McCarthy is an award-winning stained-glass artist from Exeter who uses left-over pieces of glass from her larger commissioned pieces as well as reclaimed glass to make smaller panels, roundels, glass bunting and suncatchers which she sells in her Folksy shop Amy Orange Juice. You can find out more about her on her website, Facebook page or her blog.

How to write a press release

The winning wooly woofers are…

Exploring techniques: Art on the iPad