Ever wondered where our lovely, colourful Folksy logo came from? Well, it was designed by the talented Lydia Lapinski, aka Studio Binky. Lydia runs the Sheffield-based design studio from her brightly colourful studio space. She also makes beautiful cards, prints, illustrations and colouring books, which she sells in her Studio Binky Folksy shop. We caught up with Lydia to find out more about the inspiration behind her work…

Can you tell us a bit about yourself and your work?
My name is Lydia Lapinski. I’m half-Irish, quarter-Ukrainian but was born in the UK. I’m originally from Nottingham but now live in Sheffield with my husband and two house rabbits. As a kid I was always moving things around on shelves in my bedroom and dreamed of being a window dresser. They didn’t offer a window dressing course at my college so instead I studied the closest thing I could find: graphic design. I graduated in 2002, worked at various design agencies and now I run Studio Binky, a small independent design studio. We work in a variety of media covering illustration, graphic design, identities, packaging, animation, installations, 3D design and set / prop design, as well as recently starting the Studio Binky Shop, which is our own range of products including cards, prints and colouring books. 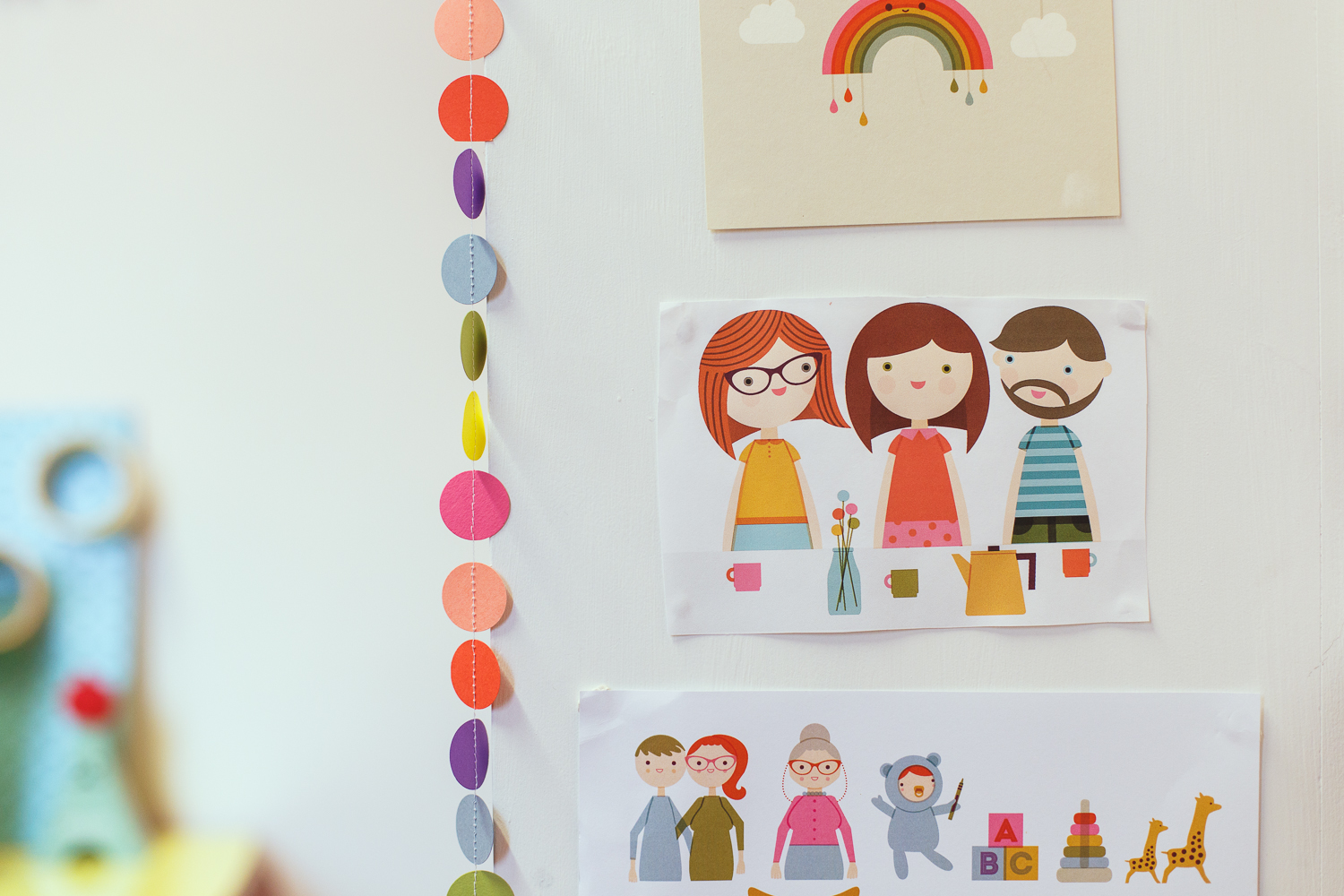 ‘Folksy is a spectrum of people, styles, skills and objects from all over the UK”

You created our colourful Folksy logo. Can you tell us about that process – how did come up with the design?
The original logo for Folksy was designed by LOVE, an agency based in Manchester. In 2011 I was overjoyed to be asked to update the logo, which was originally a black-and-white outline. I loved what was already made and just wanted to bring it to life with colour and a few minor tweaks.

How do you feel the finished design represents Folksy?
Folksy is a spectrum of people, styles, skills and objects from all over the UK, so I guess the overlapping spectrum of colour says it all.

You also designed the branding for the Folksy Summer School…
I wanted the identity for Folksy Summer School to feel like a homespun adventure day in the woodlands – you’ve left your man at home on his xbox (yawn!) or with the kids and you’re going to escape with your friends. The kind of thing that would make you want to wear your best dress with your oldest boots, put some flowers in your hair and craft the day away. 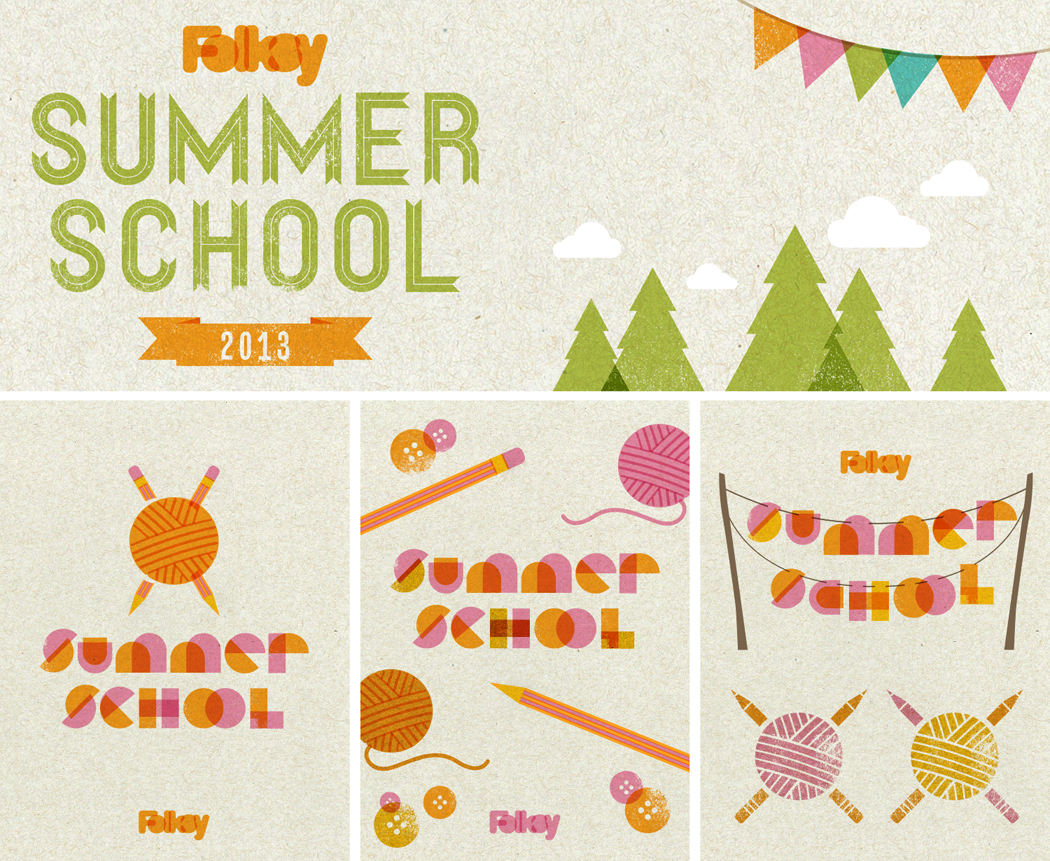 Lydia’s branding for our Summer School (top) designed with a homespun adventure feel, and her other initial ideas below

You have worked with many big clients, such as Paul Smith, the BBC and Thornton’s. Can you explain your processes in approaching your brief?
I guess my main process, no matter who the client is, is to really listen and try to get a good idea of what they need, beyond my own opinions and style. Then taking that information and experiment, before honing the idea down to something that could work on a shelf or in a book. I do a lot of mood boards and research (time permitting) and really try to get to know my subject.

You sell many lovely prints and cards in your Folksy shop. Can you talk us through one of your illustrations?
One of my favourite prints is called ‘Magic Cloud’. It was inspired by a quote I heard and loved by Wayne Dyer that really motivates me: “Don’t die with your music still inside you.” To me, that’s just what the cloud shooting out the rainbow is saying. Each print might look simple but they all have meaning to me. 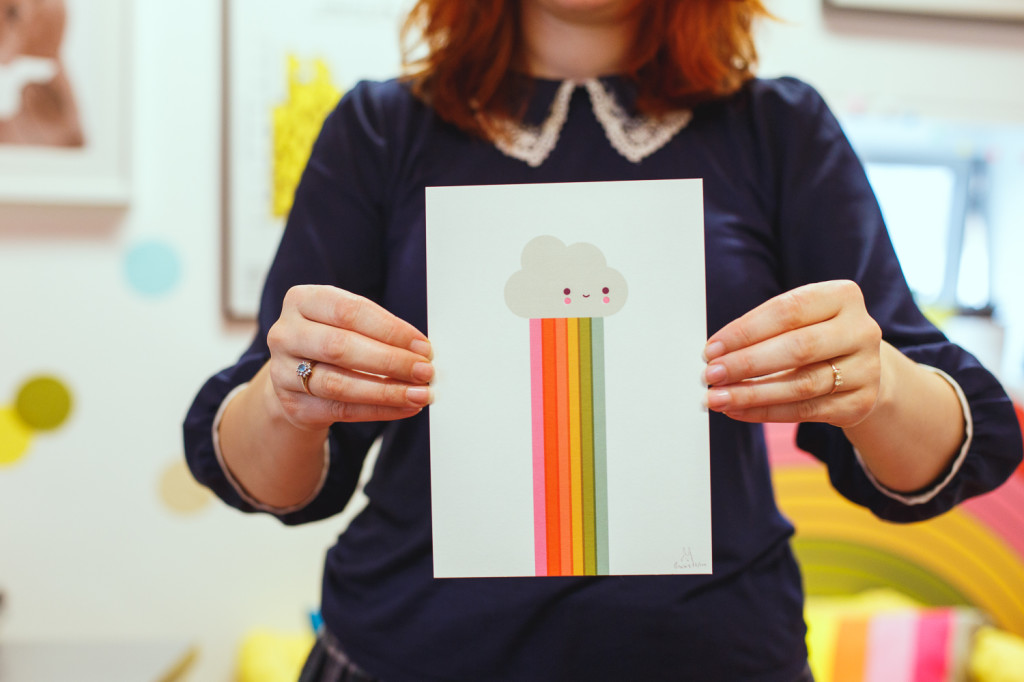 Lydia’s Magic Cloud print was inspired by a quote she heard by Wayne Dyer: “Don’t die with your music still inside you.”

How did you find your style?
I feel like it has taken almost a decade for my style to form. In the beginning when I worked for design agencies it was the norm to be able to do many styles for many clients and be flexible. It was an amazing way to learn lots of skills. Now I’m working mostly on my own projects a stronger style informed by all the things that make me excited to be alive seems to have formed – things like colour, the magic of nature, shapes in mid-century design and cute faces.

Where do you work? Can you describe your studio?
Studio Binky is based is in Persistence Works, which is a Yorkshire Artspace run building on Brown Street in Sheffield. It’s home to 80 artists; a huge grey building with sharp angles, and concrete walls. My studio is my second home, a little burst of colour tucked away in a cosy corner directly above Made North Gallery. It’s a bit like a dolls’ house with a tiny yellow sofa, a rainbow school tray unit, a mini meeting table and a half size 50s kitchenette. I’m constantly re-arranging things to try to get the maximum use of space. 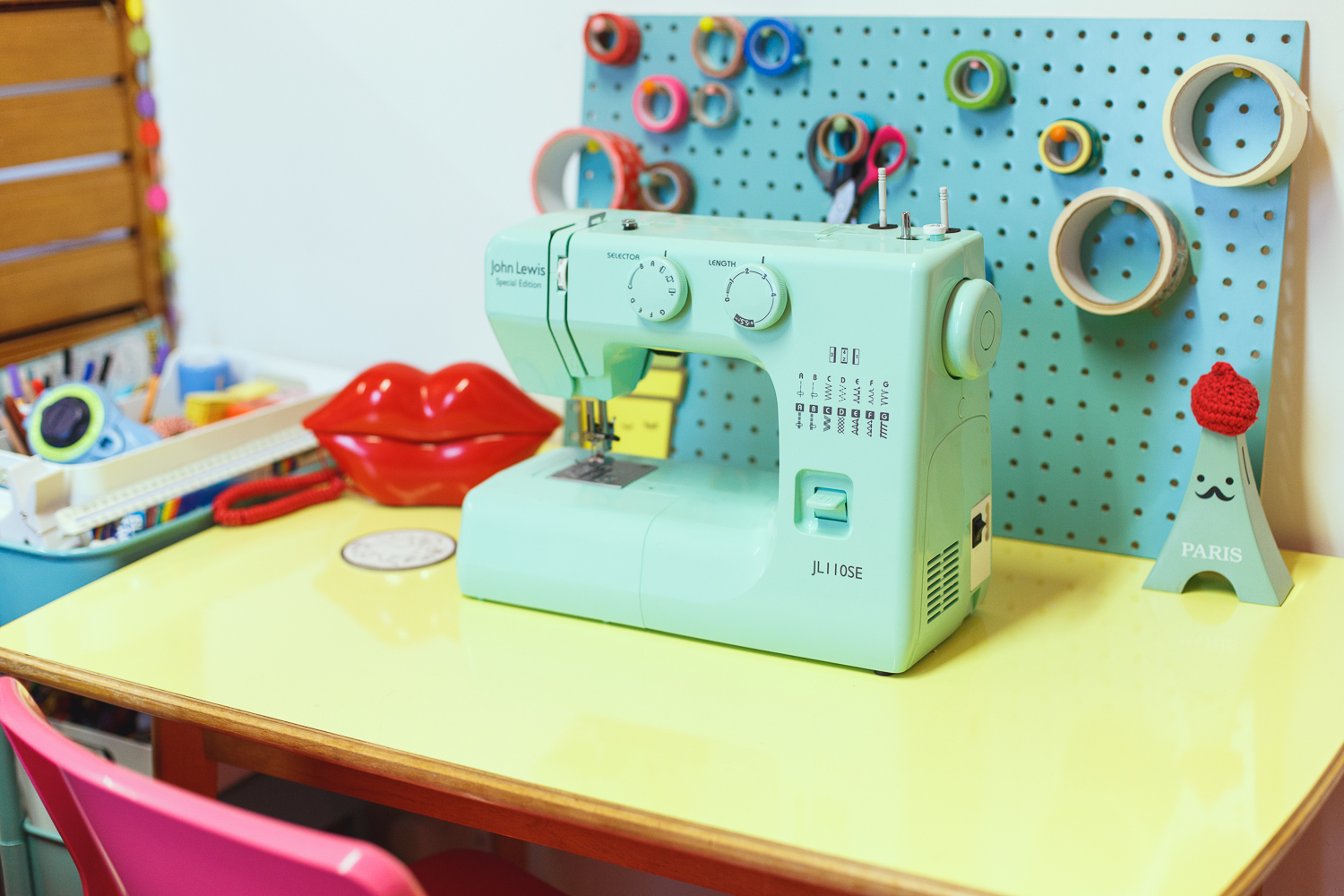 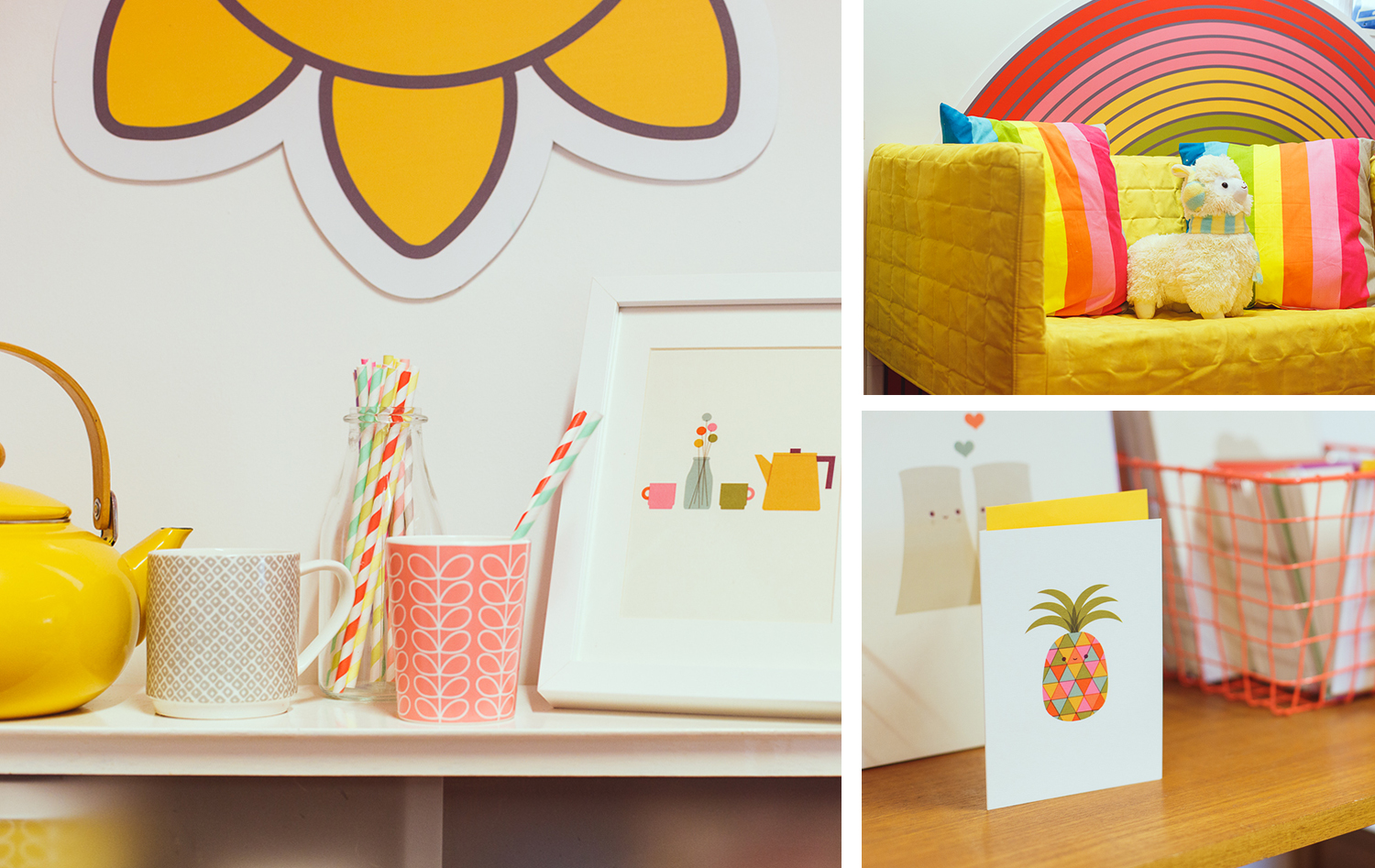 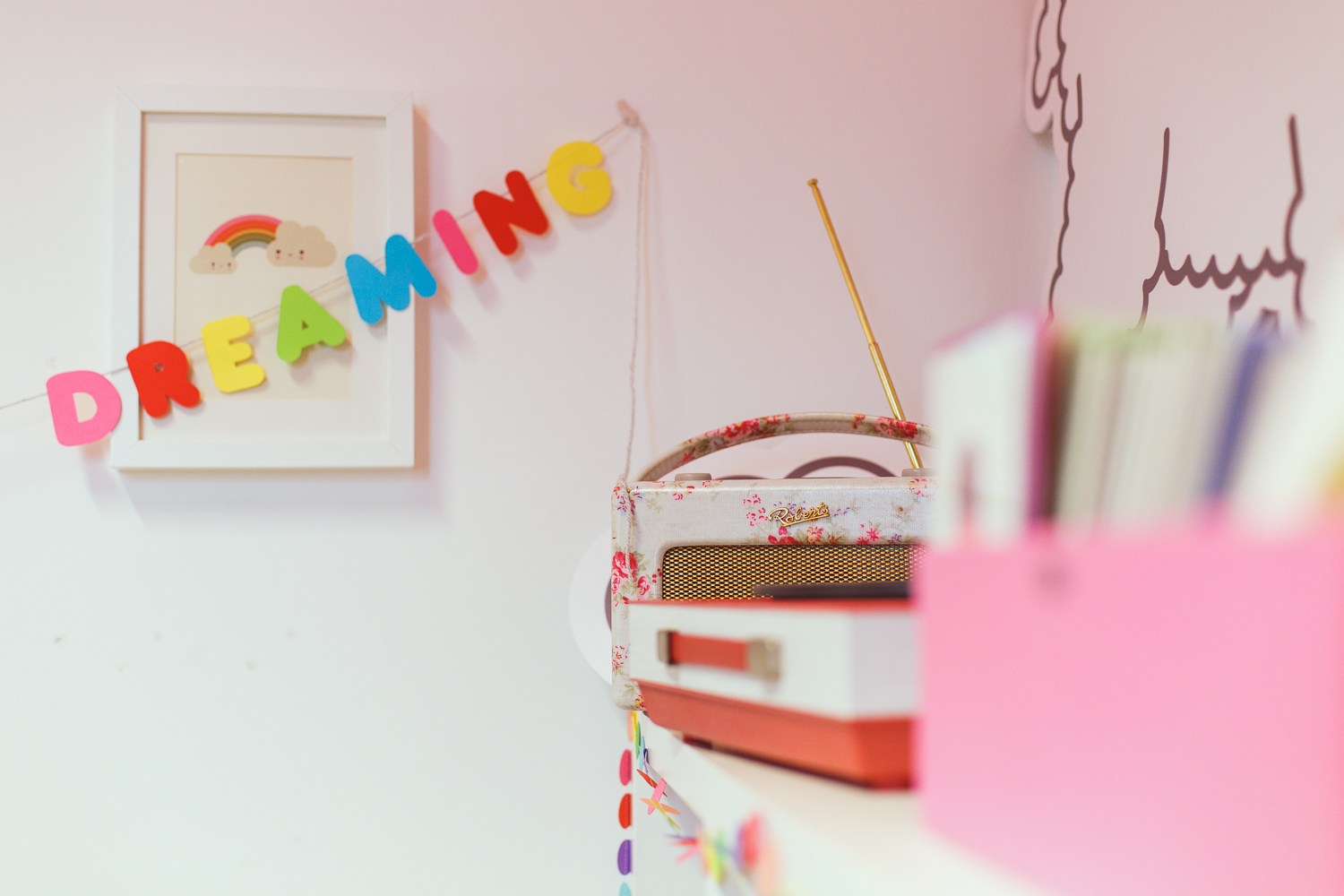 Lydia’s studio in Persistence Works is a riot of colour

Finally, is there a piece of work you’re particularly proud of?
I’m probably most proud of a recent exhibition we did at The Washington Pub in Sheffield as part of Pub Scrawl. Mainly for the sheer amount of work we put in, and also the amount of people we engaged with. People of all ages were colouring in and designing outfits for alpacas and flying V guitars. Our grand plan for our installation was to transform The Washington – Sheffield’s ‘spiritual home of music’ – into a place of colour, cuteness and playful reverence. We transformed the dance floor into a neon chapel, hosting its Sunday service. The chapel’s walls were adorned with ghosts from Sheffield’s past including the Tinsley Towers and Roxy disco and The Oracle light screen danced to the mesmerising generative music of the Random Rainbow Organ. 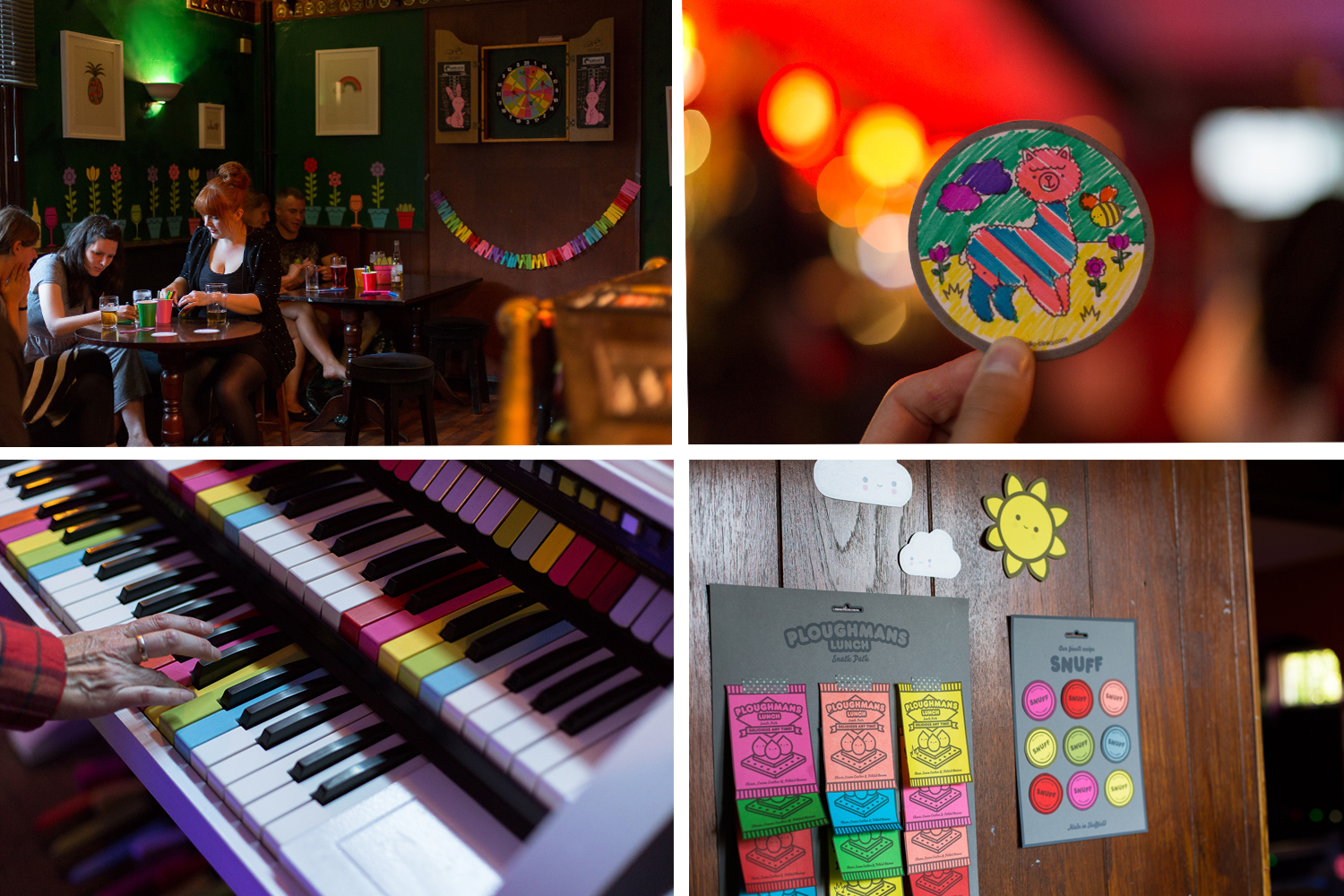 Outside in the beer garden Studio Binky’s Sheffield Colouring Book came to life with a giant pencil rainbow, 5ft Alpacas and lots of paper flowers, nestled alongside LED mushroom lights, rainbow pencil pots and papercraft bunting. We also transformed the taproom into a Studio Binky colouring wonderland, with a multicoloured dartboard, papercraft Sheffield landmarks including Park Hill and a Studio Binky shop where visitors could purchase our colouring book, prints, cards and specially designed badges. 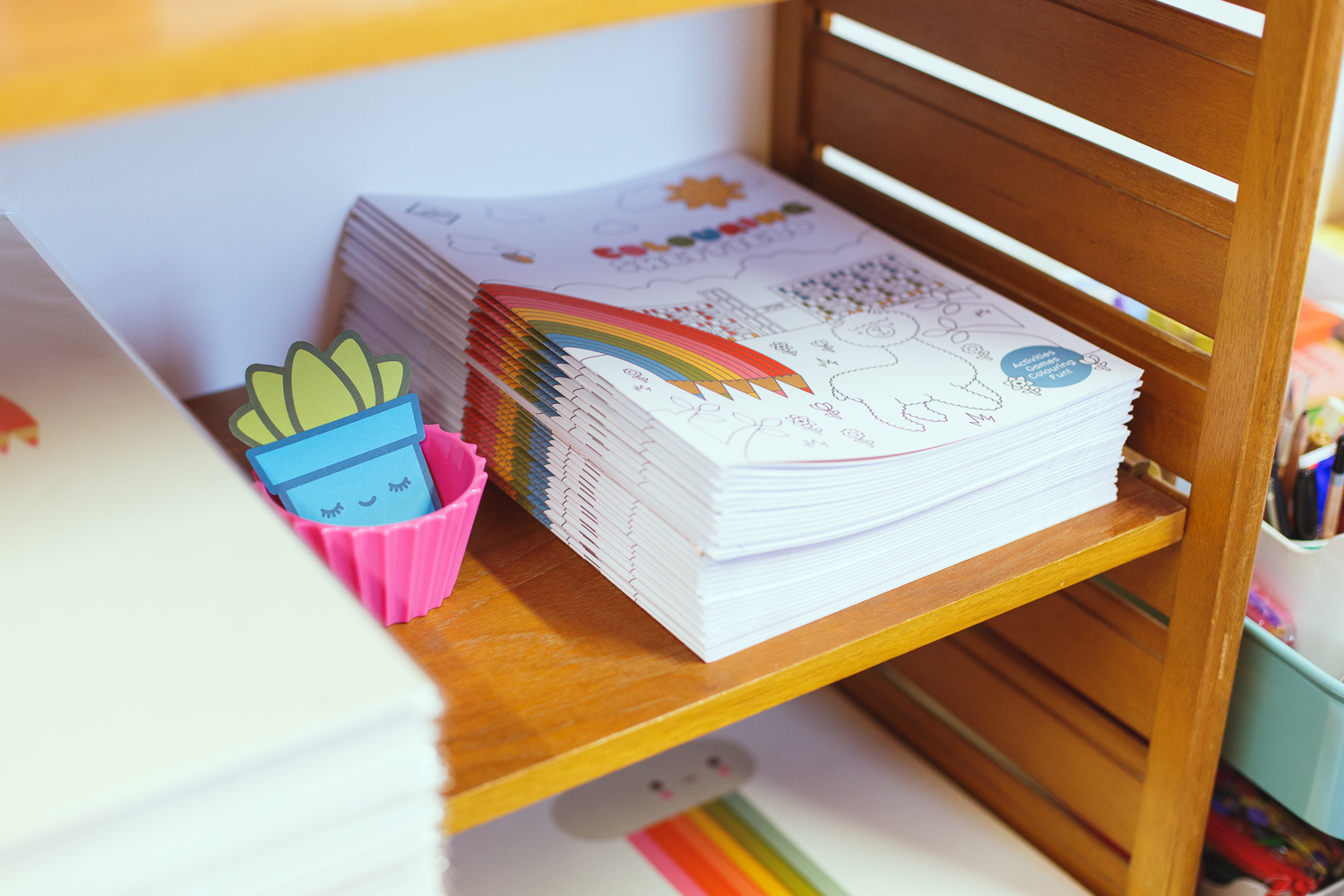 You can buy Lydia’s prints, cards and illustrations in her Studio Binky shop >>

Lou Archell is Digital Editor at large for Folksy. She loves nothing more than being in the woods, adventuring, and playing house. When she's not sitting around camp fires or renovating her home she can be found writing her blog, faffing on Instagram and curating content for Folksy.

Doug Richard: How to price your work when you are a new business

that exhibition sounds fabbo. love your work, a ray of sunshine. congratulations on being featured seller. x

Just a reminder that Folksy isn’t all about the girls :)