Popular Posts
Buy Less, Buy Better, Buy Handmade
Craft Fair Secrets – How to Make a...
How to take product shots on your phone
How to sell more at markets, craft fairs...
Craft Fair Secrets – How much stock do...
How to choose the right social media channel...
Meet the maker: The Cornish Coaster Company
Craft fair inspiration – big ideas for small...
Meet Sara Tasker from Me and Orla –...
The best Instagram hashtags for craft and handmade
How to find your confidence as an artist...
10 fun gifts for teachers to make with...
The best Instagram challenges for makers & why...
Craft Fair Secrets: Not sold much? Here’s why...
Everything you need to know about tax if...
Meet John Bloor – the printmaker carving beautiful...
Home Craft Stories How my Flat Cap Bags became famous 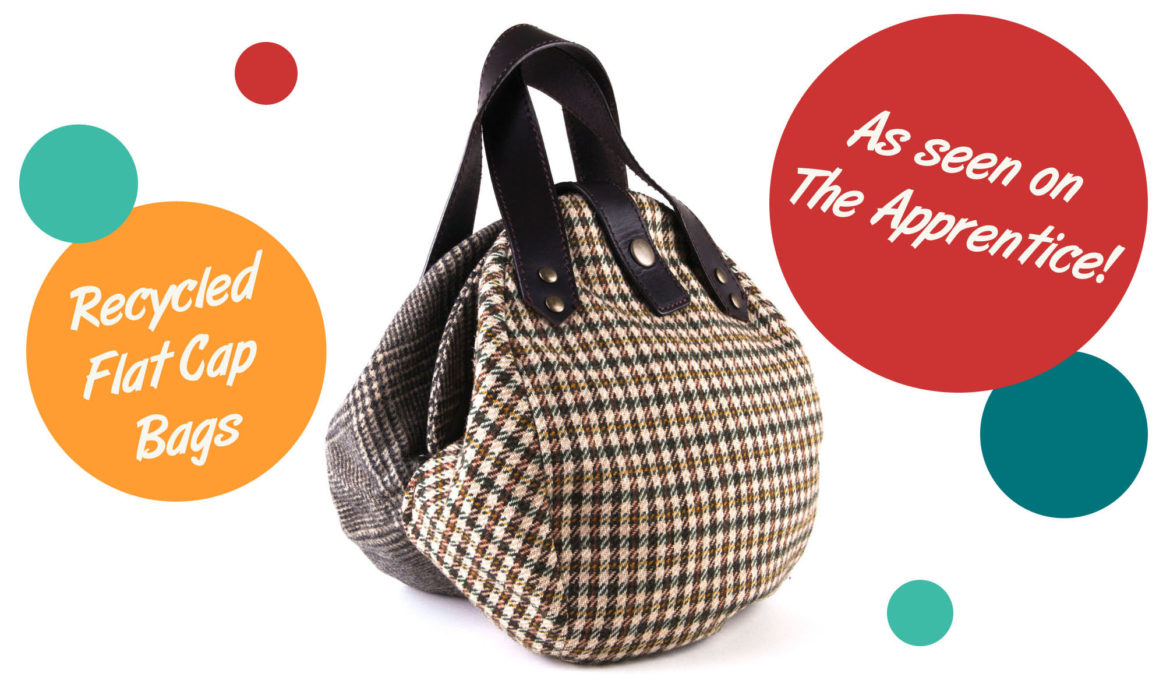 Earlier this year Folksy seller Rebecca Vorperian from girlwithbeads, and maker of the now-famous Flat Cap Handbag, received a mysterious phone call from a television company asking her to sign a confidentiality agreement. If you saw last week’s episode of The Apprentice, you’ll know why. Here, Rebecca tells us about her experience of appearing on prime time television…

If you were watching BBC1 show The Apprentice last Wednesday you might have spotted me and my Flat Cap Bags making an appearance. Firstly let me briefly explain a little bit about my designs – I have been creating handmade bags, clothing and accessories from recycled materials for the past 10 years, and I like using tweeds, tartans and vintage fabrics to create unique, quirky and practical items.

So, my Apprentice experience began about six months ago with a phone call from the production company. I think they found my website after searching for tweed bags online. To start with they were mysterious until I signed a non-disclosure document, then once I was sworn to secrecy they explained they wanted to put forward my Flat Cap Bag design for a sales task on The Apprentice. I nearly fell off my chair! 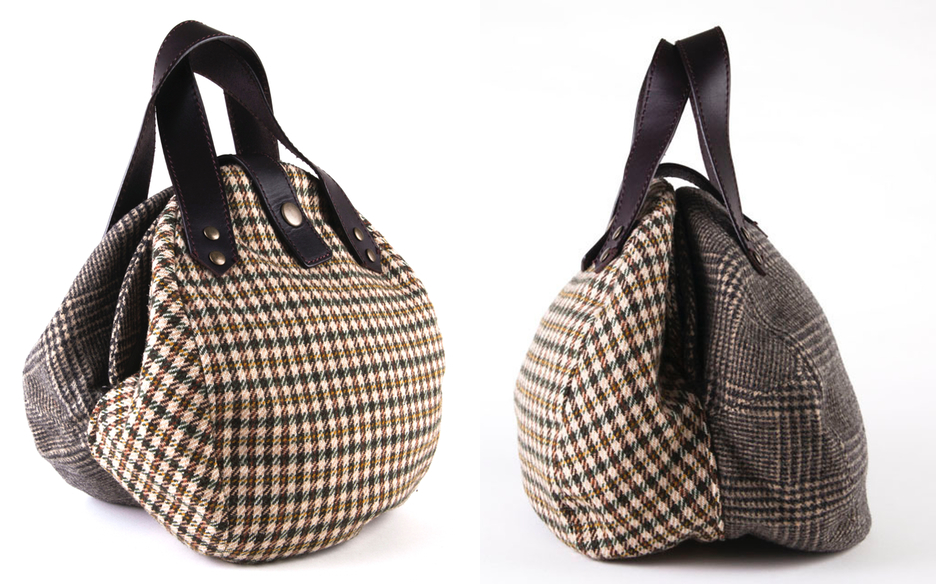 The bags would be pitched as city-meets-country fashion and the task involved the teams selecting products to sell at The Royal Bath and West Show in Somerset. Oh and would I be able to supply 50 bags upfront? Well, 50 is a large order for me considering they are all made by hand, by me alone. But luckily it was during a quiet period and I already had a big stock of caps ready, so it wasn’t problem. The producers explained there was no guarantee they would be chosen for the task or even receive any air time, but it was an opportunity I couldn’t turn down.

So a busy few weeks later, I travelled down to a posh photo studio in south-west London with my 50 bags. They were set up in a showroom with the other products up for consideration, which were pretty varied. Some were very hi-tech, there was a pet tracker, a cat toilet and a gutter cleaner, plus a bike trailer with child seat, foldable wheelies and a great handmade hanging chair…

Most of the day was spent hanging around waiting for the teams to turn up and make decisions about the products, while the representatives of the companies got to sample the nice catering laid on for us (and spot Nick Hewer and Karren Brady wandering around!). Eventually, the products were whittled down and I was invited to meet Felipe and Mark, who would ask me questions about my product – but the producers said I wasn’t to help them. I was just to let them ask the right questions! 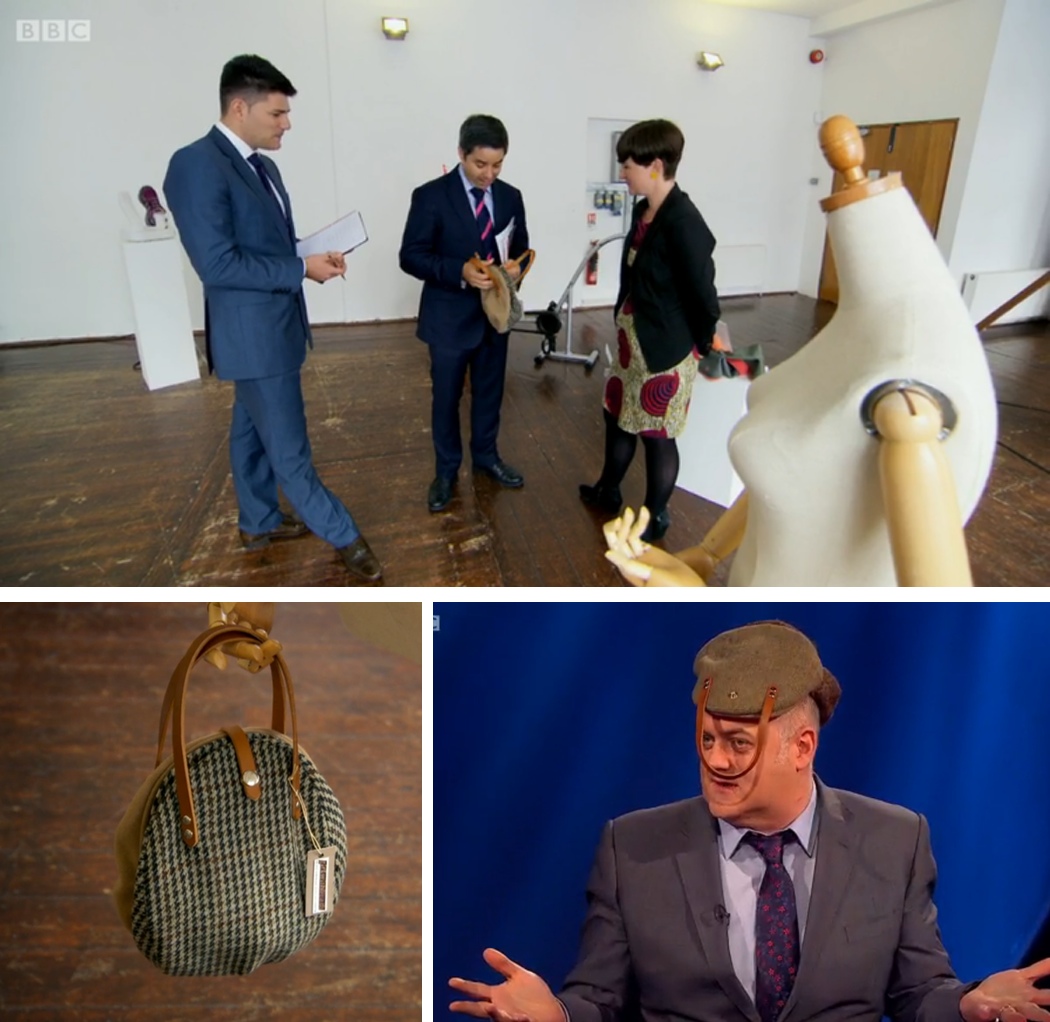 Well, walking into that room with a microphone on and the camera in my face was the most nerve-racking bit for me, but actually it wasn’t too bad and the candidates were nice and jokey, so that put me at ease. They did completely fail to ask me certain questions about price reduction, which they got blasted for in the boardroom! It was very hard to tell from that short meeting how they were going to perform, but generally they were very positive about my design and I was pleased with how it went. Then to my delight the bags were selected!

It was a long wait until I saw the episode last week. I knew, of course, how many they had sold at the fair (a total of 5 bags!) but I had no idea how the episode was going to show my bags and I was nervous about how it was all going to come across. Luckily I was invited to be in the audience for the filming of You’re Fired! on the Monday before the episode aired, so I got a preview of the show. Plus I got to see Dara O’Briain wearing a Flat Cap Bag on his head – brilliant!

Overall, I was happy with the amount of screen time and mentions that the Flat Cap Bags received, and my favourite line of the show came from Lord Sugar: “Flat Cap Handbags at dawn.” It was a shame that the stall they set up at the country show was poorly laid out and didn’t show off the bags to their best. It also didn’t help that the two candidates tasked with selling them were bickering like a couple of children all day. It would have been great to be there to give them a few pointers on presentation and customer relations! 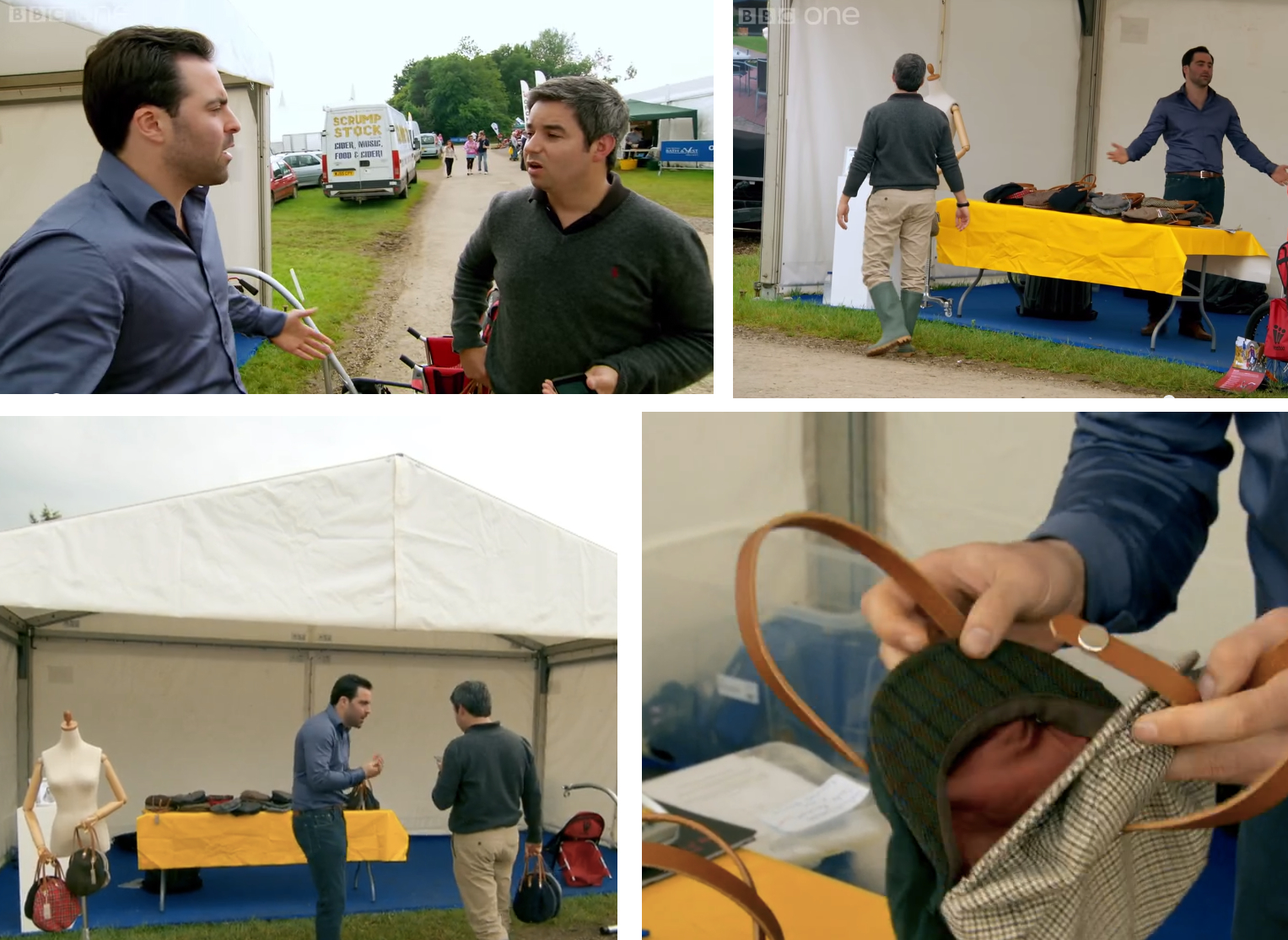 I knew the BBC wouldn’t mention my brand name, but I wanted to make sure that people watching, who liked my bags, would be able to find me after the show. So prior to the episode airing on the Wednesday I set up some promoted posts on Facebook and Twitter, timed to start during the programme and a Google Adwords campaign. They all seemed to work well. I was also tweeting and replying to people during the programme, so I knew immediately that the Flat Cap Bags were getting a reaction.

Ever since then it has all gone a bit crazy! The Flat Cap Bags I had in stock have all sold out and I am currently taking pre-orders for the next batch I am making which will get to people before Christmas.

Having been sworn to secrecy about the show for months, it’s so exciting to finally be able to tell everyone! The feedback so far has been great and it’s amazing to have so many people talking about my design. It has really been the greatest publicity for me as a small, one-woman business and great timing for Christmas presents!

And watch the episode for yourself here >>

Damson Tree Pottery – the potter who shares her studio with swallows, owls and a tiny wren

I Am Acrylic: the evolution of our market stall display

So brilliant well done! It just goes to show you never know where opportunities are going to come from. Great to see small businesses getting air time!

:-) the flat cap bags are awesome.