Jimbobart illustrations and ceramics are instantly recognisable, and their creator James Ward is probably one of the best-known designers and makers in Britain right now. His work is sold across the world, and there is even a Jimbobart shop off Brick Lane in east London. But how did it all start, and is it true that his fascination with bears stems from a childhood pet? We talked to James to find out…

So who is Jimbob?
Me!

Have you always been creative?
As far back to as I can remember I have always drawn animals. My grandparents used to be RSPB wardens, so the inspiration and subject matter have always been there. I think all children are creative – I’ve just been lucky to make it my work. 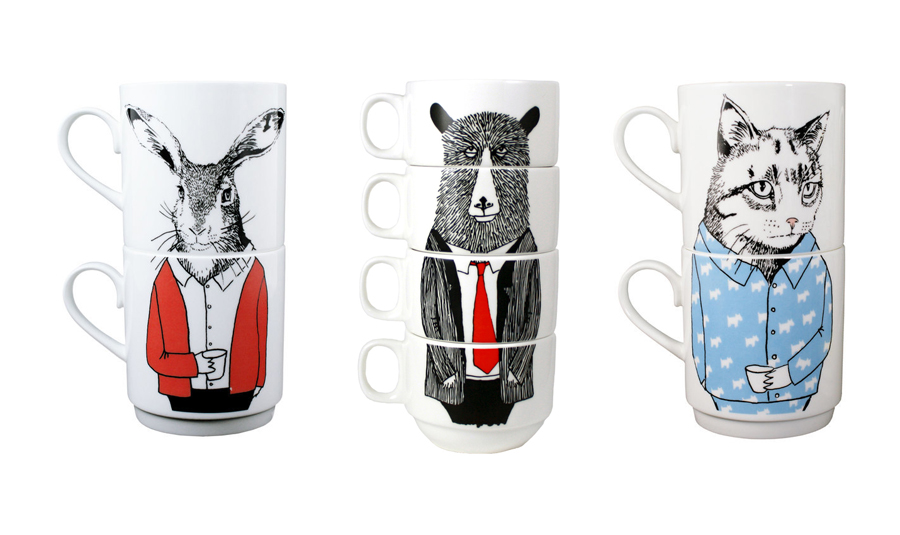 Where and how did you learn to draw?
My mother encouraged me as a child by keeping me stocked up with colouring pencils, plus she is a talented artist. She would help me with my art homework, get carried away and end up finishing pieces I started.

How did Jimbobart come into being?
Jimbobart started up when I moved into a flat in Stoke Newington. I was unemployed at the time and enjoying the freedom of drawing for long hours on projects of my choosing. Then I started to find ways of selling my artwork to make a living – the very first being a local craft market. 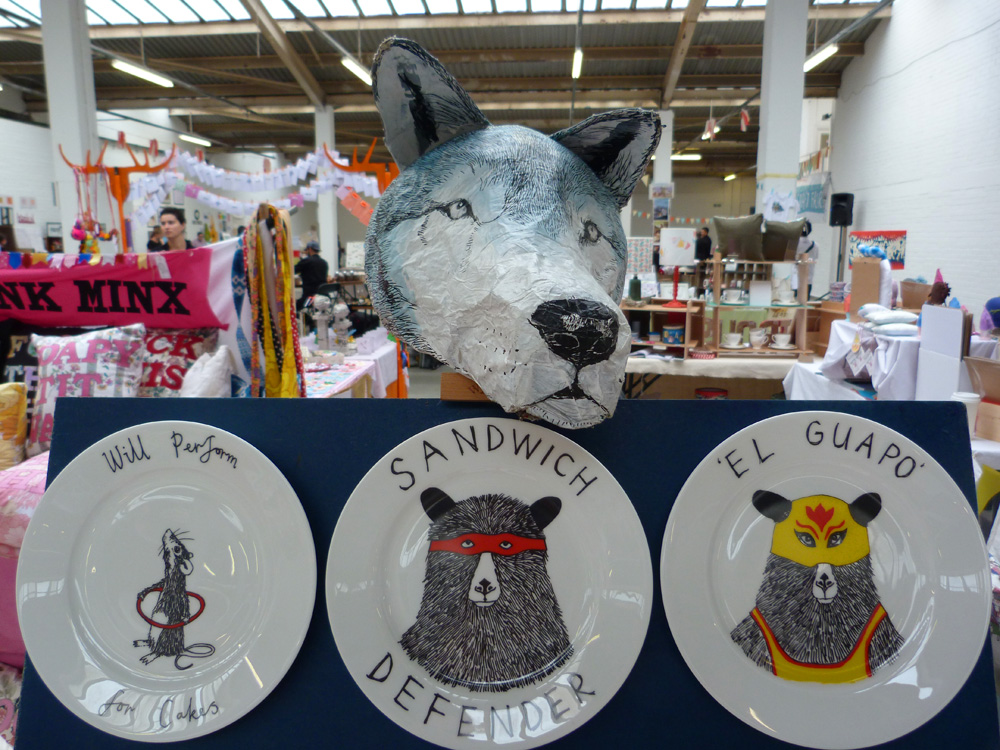 Are there any artists or designers you admire?
Yes, plenty! One of my all time favourites is an Italian street artist called Ericailcane. His main drawing subject is animals, but he’s also expressing dark situations, some political.

What else inspires you?
Lots of things inspire me, it’s so hard to pin-point one thing. I do find that inspiration always comes when you don’t expect it. When I have a project I find it’s good to spend a couple of days off relaxing doing something away from the studio, then my brain will still be thinking about it and usually an idea will pop in. 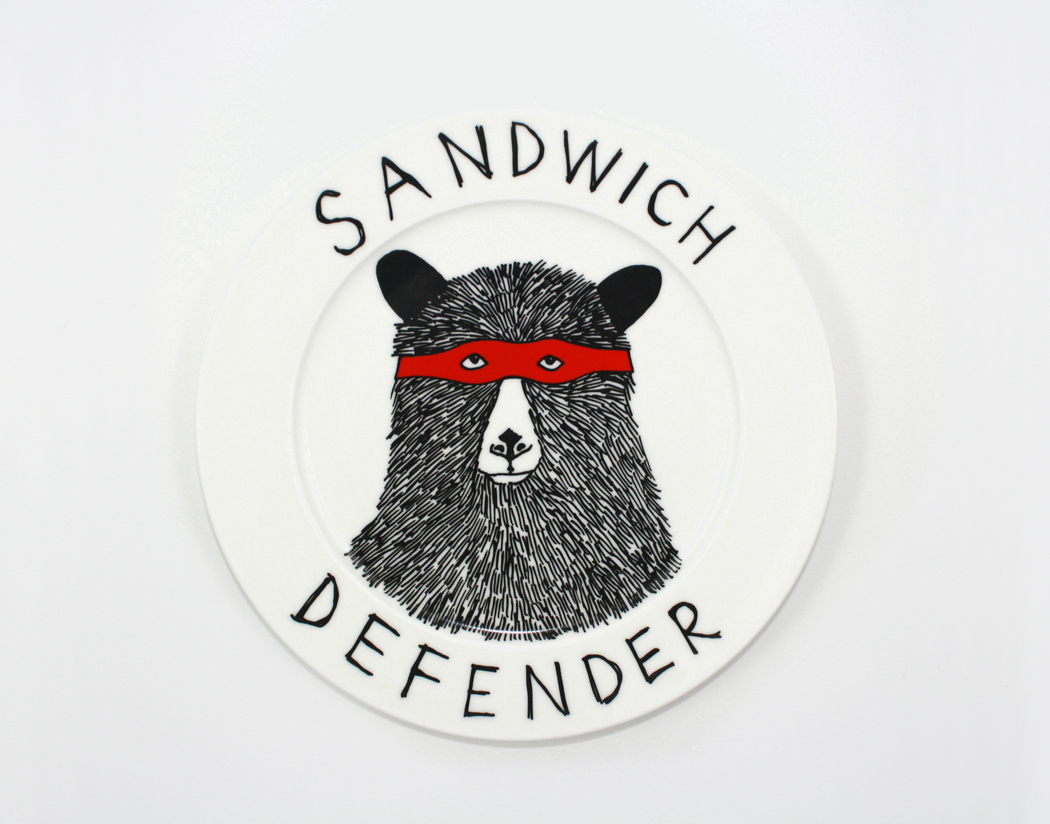 Do you think of your animals as having particular characters? Do you have a favourite?
I love drawing bears. I think my favourite is the Sandwich Defender. Growing up we had a golden retriever and there was something quite bear-like about her, I think it was the long muzzle. Her face could be very emotive, and gave you the impression she was embarrassed, guilty, happy, excited, even sad – when more likely she was probably just thinking about food! I like playing with these emotions with my bear drawings. I like to create a contradiction between the characters and the text. My first bear plate had an angry bear on it, but the text was quite polite ‘what you leave I eat’. 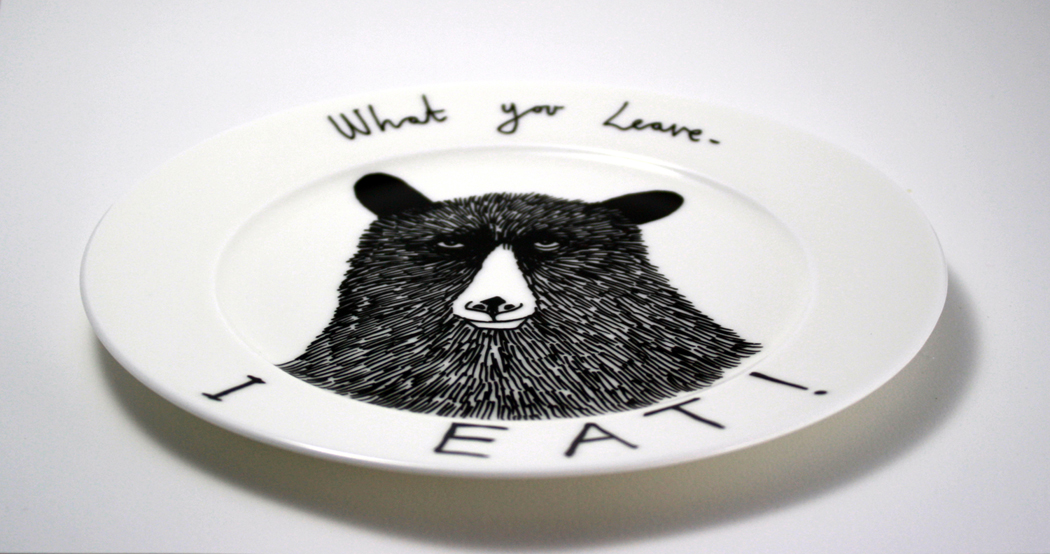 Do you have a sketchbook?
I don’t keep a tidy sketchbook any more. I use it for notes, to-do lists, sketches and scribbles. I’ve recently started to use my iPod for sketching. I did a small exhibition recently using these drawings as a starting point.

Can you talk us through your creative process? How do you start a piece?
My sketchbook is the starting point, then I’ll draw lots of different versions directly on to blank plates. I’ll pick a couple that I like and leave them around the studio for a bit. I always change my mind after I’ve seen the artwork for a while. I think it takes my brain a while to see the mistakes in my own work. Then I usually produce some hand-drawn versions for a couple of months and have them in the shop or take them to markets – it’s great to see which ones people like and don’t like. Getting feedback is so valuable. 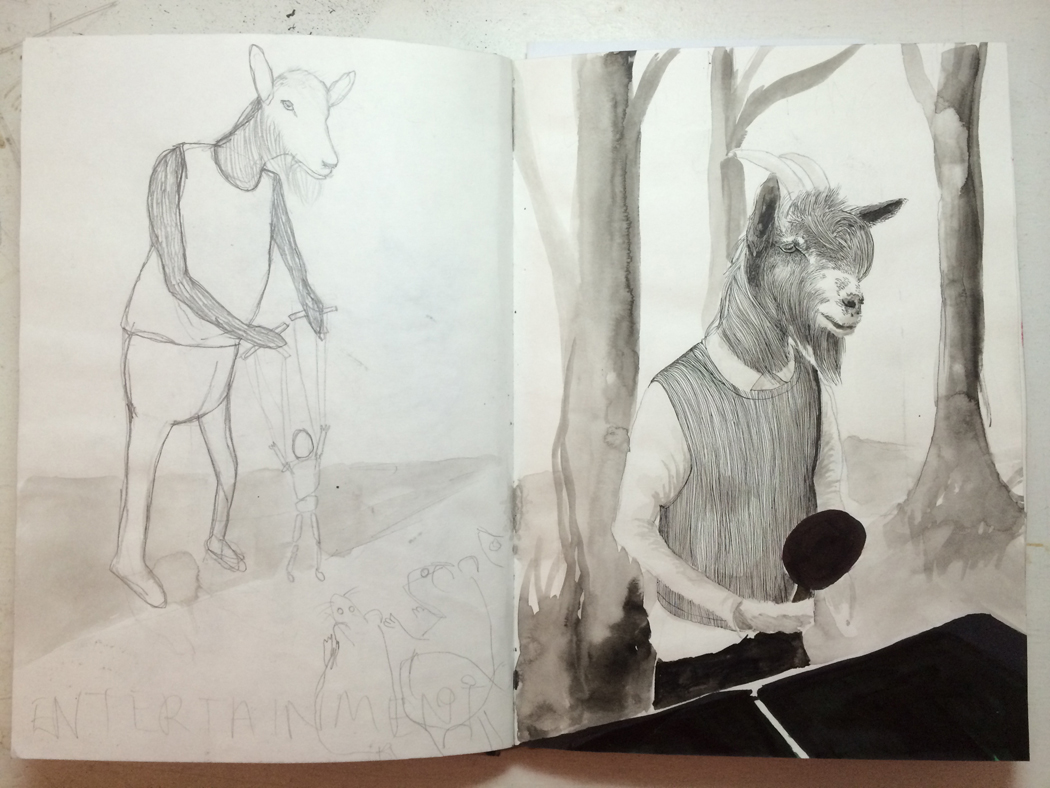 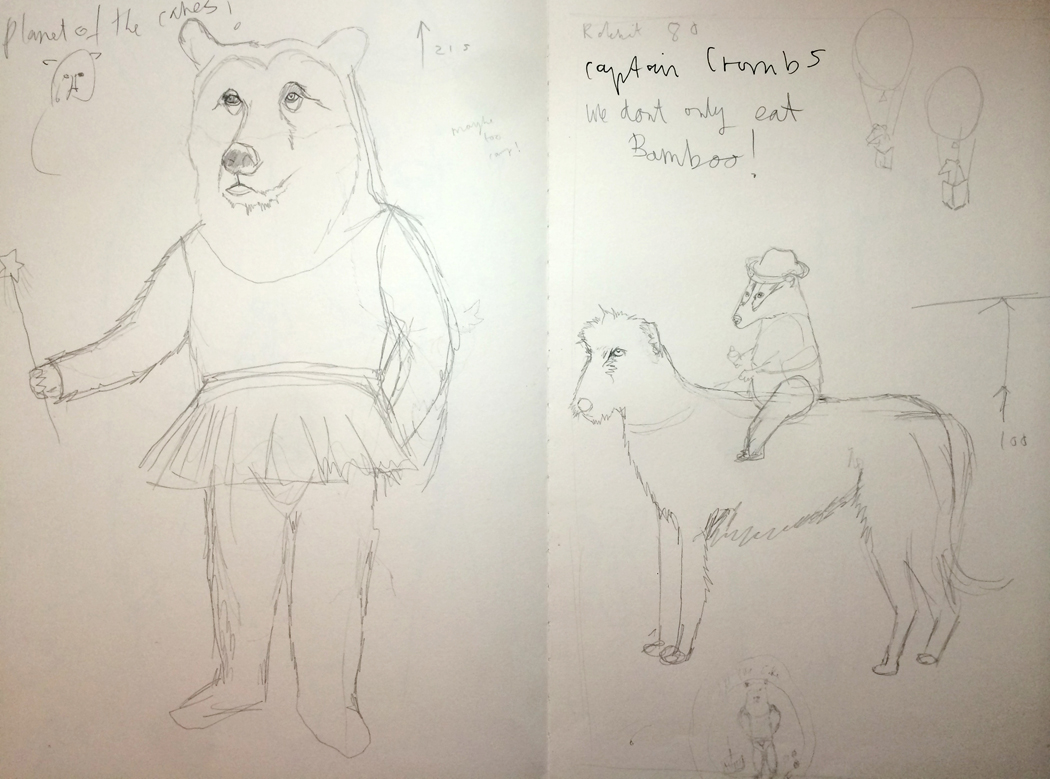 James uses his sketchbook for notes, to-do lists, sketches and scribbles, and as a starting point for new designs

What’s the most exciting project you’ve worked on?
Last year I did some drawings for Hofesh Shechter Company, a contemporary dance company, which were made into large cut-outs that were used in the production. They weren’t really anything like my own work, but it was exciting sitting in the auditorium at Sadler’s Wells Theatre and seeing them on stage as part of the performance.

Is there a piece of work you’re most proud of?
I decorated a wooden box to raise money for The Prince’s Foundation for Children & the Arts and the box was auctioned off for over £3,000. I was chuffed to see that! 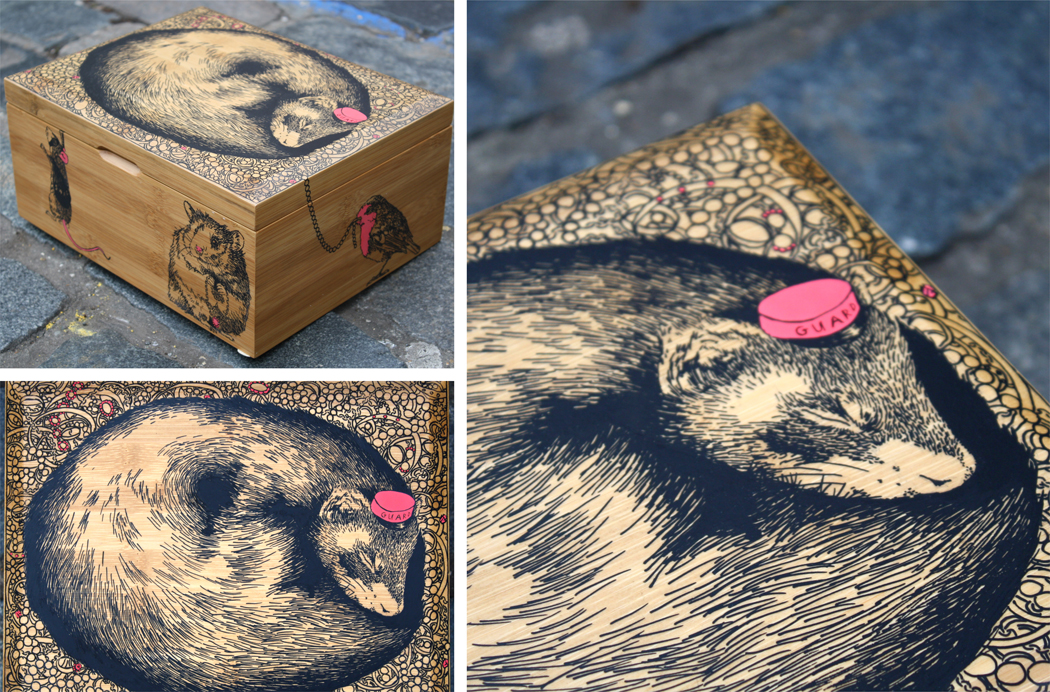 The wooden box James decorated, which was sold for over £3,000 at an auction for The Prince’s Foundation for Children & the Arts

Can you describe your studio?
My studio is also my shop now. We have a small old-fronted shop on Cheshire Street, just off Brick Lane in East London. It’s fun, we work here and have customers in at the same time. Please feel free to pop in!

Have you got any big plans for 2015?
They are secret! Ha ha, no not sure yet, maybe open up another shop? At the top of my list is that I want to buy my own kiln and start doing some limited-edition ranges of ceramics. 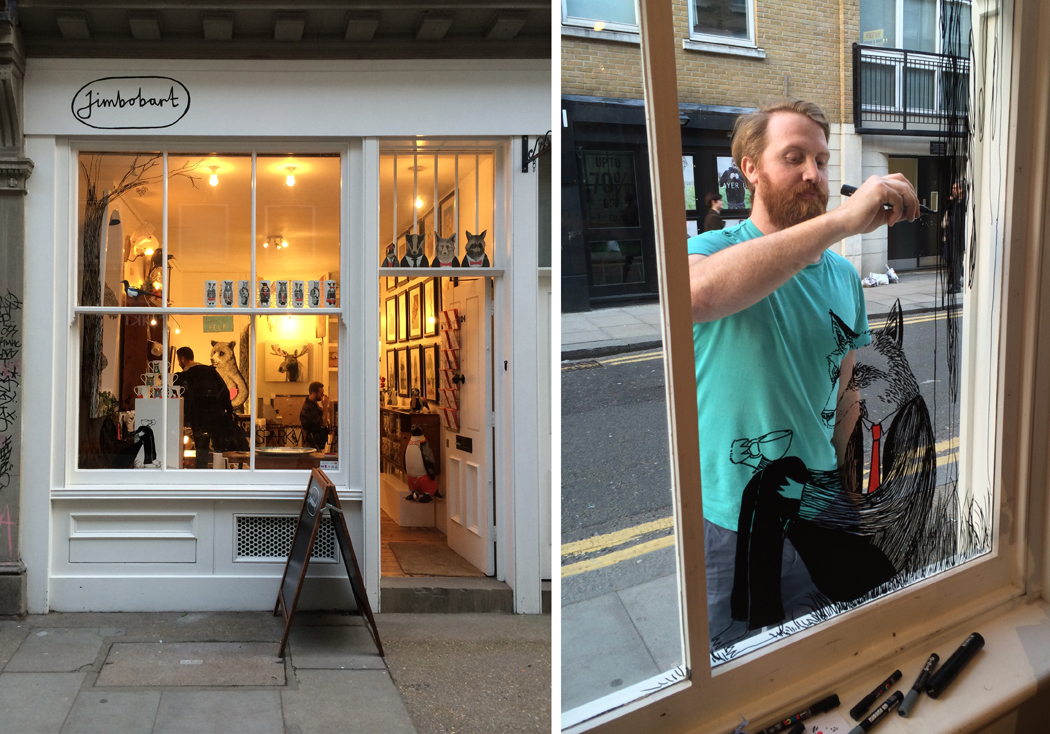 To celebrate his interview, Jimbobart is offering 25% off everything in his Folksy shop with the code ‘meetjimbob’!

How to build a strong brand identity

Meet Etchable – delightful designs made in the...

By Shelly Lee – ceramics that are as...