Home Seller TipsBusiness Tips Louise Verity from Bookishly: How I dealt with being copied

Louise Verity from Bookishly: How I dealt with being copied

Copyright is an issue that worries a lot of independent makers. How do you stop a retailer or another designer stealing your ideas or designs, and what should you do if you think they have? We wanted to hear from someone who has been through it, so we talked to Louise Verity from Bookishly. In November 2013, Louise saw a tweet from a Marks & Spencer press launch showing a product that looked uncannily like one of her prints. Louise had been designing, hand-making and selling typographic book-page art since 2009, but although she had been producing these pieces for five years and her work was well known within the design community and instantly recognisable, could she prove Marks & Spencer had copied her designs? Here Louise tells us what happened, and offers advice to other designers who might find themselves in a similar situation…

Can you explain how it all began?
Back in winter 2013, my friend sent me a tweet of a picture taken by an interiors stylist at the Marks & Spencer SS14 press launch showing a room set-up featuring a print that looked very similar to mine. It was a book page, in a black frame, printed with a quotation in a thick serif font. Cue a double take. Hey, cool! That looks exactly like my work. Wait, what?! That looks exactly like my work! I looked into it further to try and figure out if it was one of Marks & Spencer’s actual products or just set dressing, and it wasn’t totally clear. Later on it was confirmed by a picture on their Instagram feed that it was one of their products.

How did you feel when you saw it?
I was pretty gutted. I was worried about my independent stockists and how they might react, and about how much it would cost to sort out. 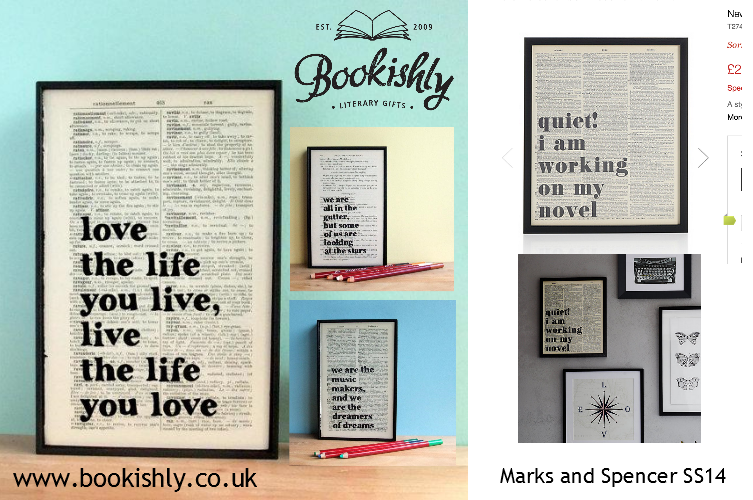 Louise’s original work on the left, and the prints on sale in Marks & Spencer on the right

What was your first move?
I emailed a lawyer I had met a few months earlier. A friend with a small business had recommended him, and I had originally talked to him to find out what parts of my products I could protect. The lawyer sent a letter to Marks & Spencer, but they took a while to reply, and when they did they denied any issue at all. They said my claim was “unfounded” and they mischaracterised my assertion of copyright as wanting a monopoly on “text overlaid on book pages,” which I never suggested, and that was it. It was fairly demoralising, as the cost of taking further action is so huge. By this time the product was already for sale on their website and in stores.

What did you do next?
I spoke to another lawyer about the possibility of talking about it on social media. She really helped me understand how that might go, and I looked at some previous examples of designers who had done the same. I decided that it was worth trying and posted about it on my Facebook page and Twitter. It all went a bit crazy. It was picked up by The Independent and the Daily Mail, a few local news outlets, and I was interviewed on our local TV news and radio. I got a lot of support from the public and the design community, but Marks & Spencer maintained their position. They did say the product was a short print run and wouldn’t be reprinted.

So what was the final outcome?
In the end, we left it at that. M&S removed it from their website and sold through their stock. It would have been too expensive for a small business like mine to pursue it any further.

Do you feel happy with the way it was resolved?
I’m not exactly happy with the situation, but I have come to accept that the best thing to do is to rise up and move on. Getting caught up in the unfairness of the situation isn’t going to get the creative juices going.

How much did the whole process cost you?
All in all it was under £500 in legal fees etc, so it could have been worse.

What advice would you give to other designers or makers who find themselves in a similar situation?
I would recommend talking to an IP (Intellectual Property) lawyer. Many will give you an initial consultation for free, so then you can decide whether or not you want to go any further. It is very stressful and the chances of a positive outcome are slim. It might be that you can get some positive PR out of it (why shouldn’t you?) but that is also quite demanding.

Is there anywhere you would recommend makers go to for advice?
I found McDaniel & Co. to be really helpful – especially Kelly, who was very kind and full of good information. When the Daily Mail journalist turned up on our doorstep on a Sunday lunchtime, Kelly took my call and gave me some great advice.

What would you say to large retailers, or indeed independent makers, on the issue of copying other people’s ideas and work?
Many large retailers are brilliant to work with. I was delighted to supply Selfridges with some prints last Christmas, and Waterstones have stocked my greetings cards too. I wish that those with a reputation for copying would consider working with independent designers instead. I always said I would love to work with Marks & Spencer on a product range – and I still would!

For independent designers considering copying someone’s work, you have to think about how you want your business to be viewed. It’s a tight-knit community, and if you get found out, the stress, bad feeling and negative attention that could create surely isn’t worth it? That’s aside from the fact that it isn’t fair!

You can find Louise’s range of original literary gifts for book lovers in her Folksy shop, Bookishly >>

Read our brief guide to copyright infringement, what to do if you think your copyright has been infringed, and what you are allowed to sell on Folksy.

You can get more advice about copyright and trademarks from the following organisations:

Meet the Maker: I Am Acrylic

A beginner’s guide to TikTok for artists and...

How to be featured on Folksy

So it cost £500 on legal advice to achieve… nothing? There seems to be no protection for independent designers in this country (unless you can afford to spend lots of money) because the Intellectual Property laws are apparently a joke and small businesses or creative individuals just don’t have the resources to fight big companies with deep pockets. This has happened to lots of people I know and will continue to happen until there is a change in the law.

[…] some of the giants like my friend Louise at Bookishly. Read more about her battle with M&S here For what it is worth, when I create a new poem print I think about: – Is it different from […]

[…] Our guest experts were Niall Head-Rapson, director of McDaniel & Co, solicitors who specialise in intellectual property law and are an ACID legal affiliate; Silvia Baumgart who leads Own-it, an educational organisation based at the University of the Arts London that offers free advice on copyright, design rights, trade marks and licensing for creatives; and Louise Verity from Bookishly, a designer with first-hand experience of copyright issues which she wrote about here. […]

[…] to get the creative juices going”.  I was mesmerised by Louise’s experience on the Folksy Blog and her feature has some great […]