Popular Posts
Buy Less, Buy Better, Buy Handmade
Craft Fair Secrets – How to Make a...
How to take product shots on your phone
How to sell more at markets, craft fairs...
Craft Fair Secrets – How much stock do...
How to choose the right social media channel...
Meet the maker: The Cornish Coaster Company
Craft fair inspiration – big ideas for small...
Meet Sara Tasker from Me and Orla –...
The best Instagram hashtags for craft and handmade
How to find your confidence as an artist...
10 fun gifts for teachers to make with...
The best Instagram challenges for makers & why...
Craft Fair Secrets: Not sold much? Here’s why...
Everything you need to know about tax if...
Meet John Bloor – the printmaker carving beautiful...
Home News Folksy data analysis: buyer decision time
NewsSelling on FolksyUpdates

This is a guest post by Tom Stafford, an academic who is currently visiting us at Folksy. Tom works on the psychology of decision making and learning, and is helping us look at some of the Folksy web analytics data to understand how people use the site.

To kick off, I’ve drawn some graphs to try to understand the decision process buyers make as they look at the item pages. The Folksy team provided me with 5,000 items listed on the site in the last month, and for each item the price of that item, the average amount of time people spent viewing that item (and a bunch of others stats like number of views etc).

The graphs I’ve drawn show how viewing time varies across the different items. I’ve split the items into price groups – the first group containing the 20% cheapest items (shown at the bottom), the second group the next 20% cheapest and so on to the 20% most expensive items (shown at the top). Average time looking at the items is shown in seconds along the bottom (x-axis) and frequency count is shown in the hight of the plots (y-axis). 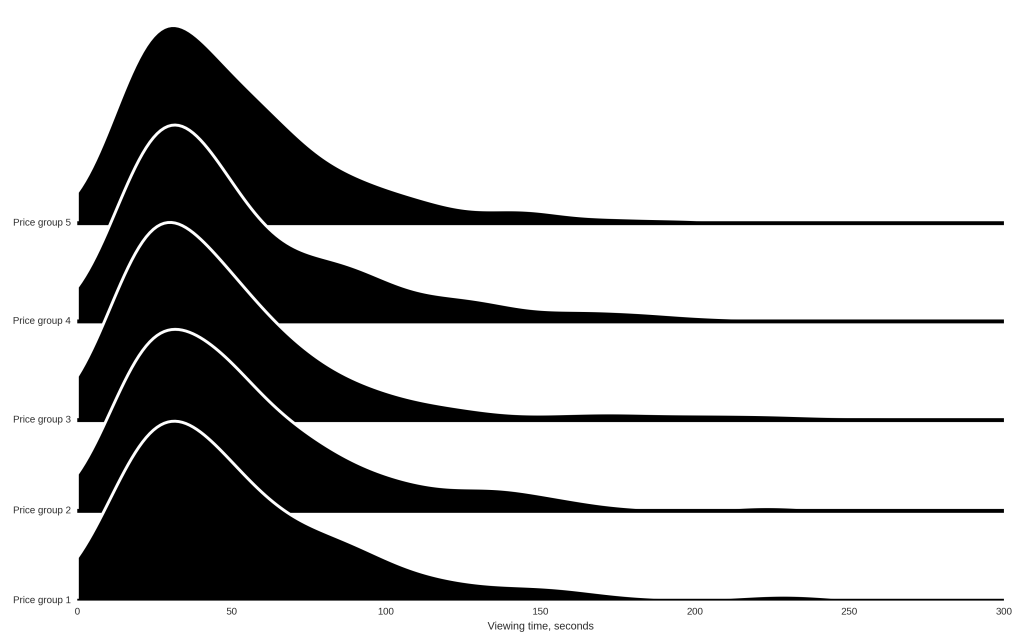 Now aside from looking a bit like a famous album cover, these black lumps tell us a few important things about how visitors to Folksy.com behave:

My interpretation of what this means is that items on Folksy get a fair amount of attention. Fifty seconds may not sound long but it is an age in terms of online attention spans. It’s more surprising to me that there is no difference with item price – you might expect that people would spend more time looking at pages for items which cost more, but this doesn’t appear to be true.

An important note is that although we have calculated average viewing time, this may not reflect the typical viewing time. Other research into how long users spend on webpages show that the average viewing time is made up of a majority who quit after a few seconds, and a minority who linger for far longer. The average of 40 seconds may well be made up of many people spending 4 seconds on a page and a few spending 4 minutes, for example. So you shouldn’t count on most people spending 50 seconds on your item page, but the long average does show that at least a significant minority are spending that long or longer.

So, no revolutionary insights from this first analysis, but it’s probably fair to say that whether you want to sell a £1 hair pin or a £500 table, the dilemma is the same: you want to list items in a way that will catch people’s attention (in those first 4 seconds), but also contain extra details (for that important minority who stay for longer).

[Technical notes: this analysis was done in Python using the Pandas library. I learnt how to draw the funky graphs from Valentine Svensson. The plots are frequency distributions from  KDEs, rather than raw histogram data. Data is filtered to exclude pages with very long viewing times (>300 seconds) or very high prices (>£200)]

Great informative article, look forward to more like this.

I also think people will view an item of interest (particularly higher value items) on a number of separate occasions before committing to purchase. So the viewing time and comparison across the price bands might not be a true picture in that sense.