Popular Posts
Buy Less, Buy Better, Buy Handmade
Craft Fair Secrets – How to Make a...
How to take product shots on your phone
How to sell more at markets, craft fairs...
Craft Fair Secrets – How much stock do...
How to choose the right social media channel...
Meet the maker: The Cornish Coaster Company
Craft fair inspiration – big ideas for small...
Meet Sara Tasker from Me and Orla –...
The best Instagram hashtags for craft and handmade
How to find your confidence as an artist...
10 fun gifts for teachers to make with...
The best Instagram challenges for makers & why...
Craft Fair Secrets: Not sold much? Here’s why...
Everything you need to know about tax if...
Meet John Bloor – the printmaker carving beautiful...
Home InterviewsMeet the Maker The creative life of Ladybird Likes 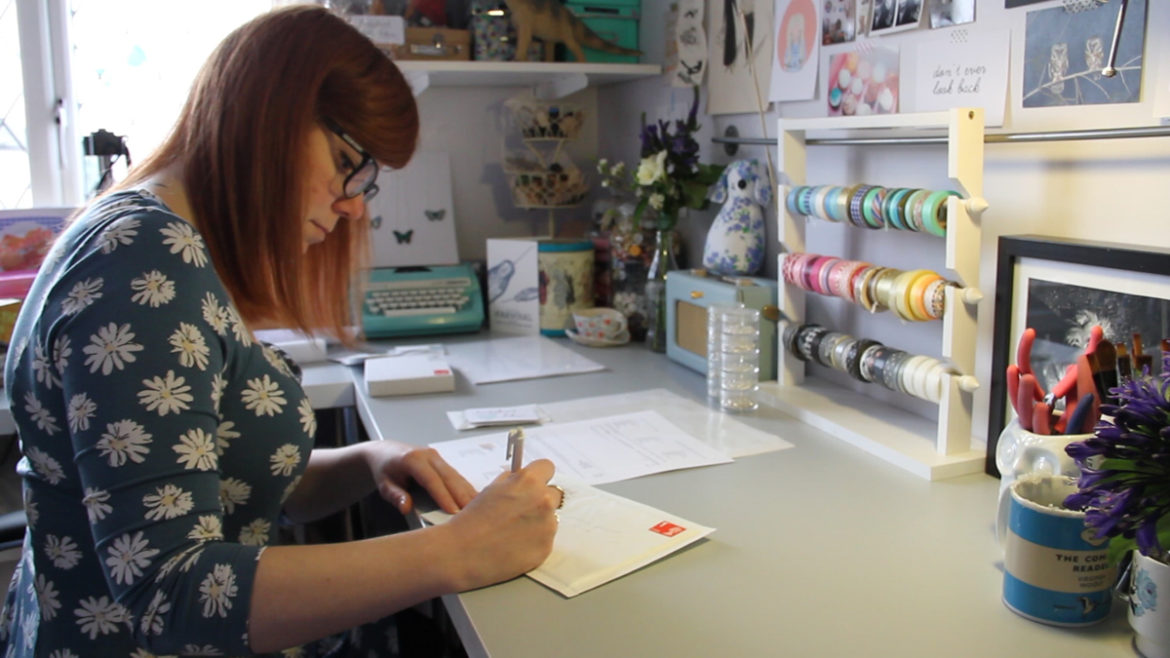 The creative life of Ladybird Likes

Ladybird Likes started as a result of my insatiable need to be making stuff wherever possible. I made gifts for all my friends, and they told me I should try and sell them. Obviously I thought they were just being polite… but people seemed to like what I was making and slowly things took off – I’ve never looked back.

For Zoe Bateman craft is a way of life, and it was her “insatiable need to be making stuff” that led to Ladybird Likes, her handmade jewellery business, where she creates animal jewellery and necklaces, brooches and other pieces inspired by nature and thrifted finds. As well as being a professional jeweller, Zoe also has a degree in Creative Writing, and diplomas in Photojournalism, Beginner’s Japanese, Visual Thinking and Professional Photographic Practice. We couldn’t wait to find out more about this girl with a thirst for everything…

Can you introduce yourself?
My name is Zoe Jade, I’m 28 years old, and I’m a born and bred West Londoner. I studied Creative Writing and English Literature at university, before pulling a bit of a 180 and deciding I wanted to run my own craft business. I’ve been running Ladybird Likes for a little over three years now and couldn’t imagine doing anything else. 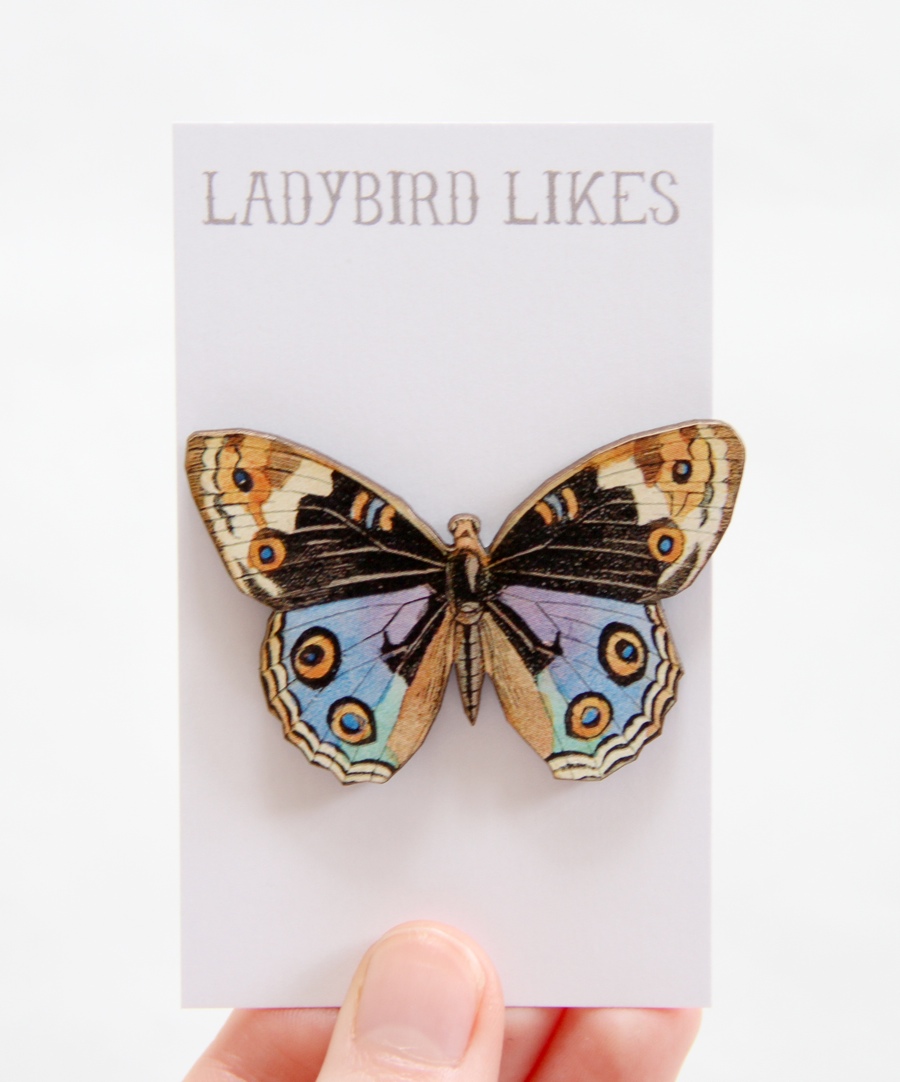 Have you always been creative?
I have. When I was younger my mum always did arts and crafts with me and my sisters, and we spent a lot of time creating works of art to be stuck on the fridge. In school I went off arty subjects because of the way they were taught, and the focus on traditional ‘fine art’ wasn’t really what I enjoyed. But after graduating from university I started reading lots of craft blogs and got back into making stuff just for fun, and it reignited my love of crafts.

What was the first thing you remember making?
At a summer fete when I was younger I made a painted pasta necklace that I was particularly proud of. I think that’s my first real memory of making something, and I kind of wish I still had that necklace. 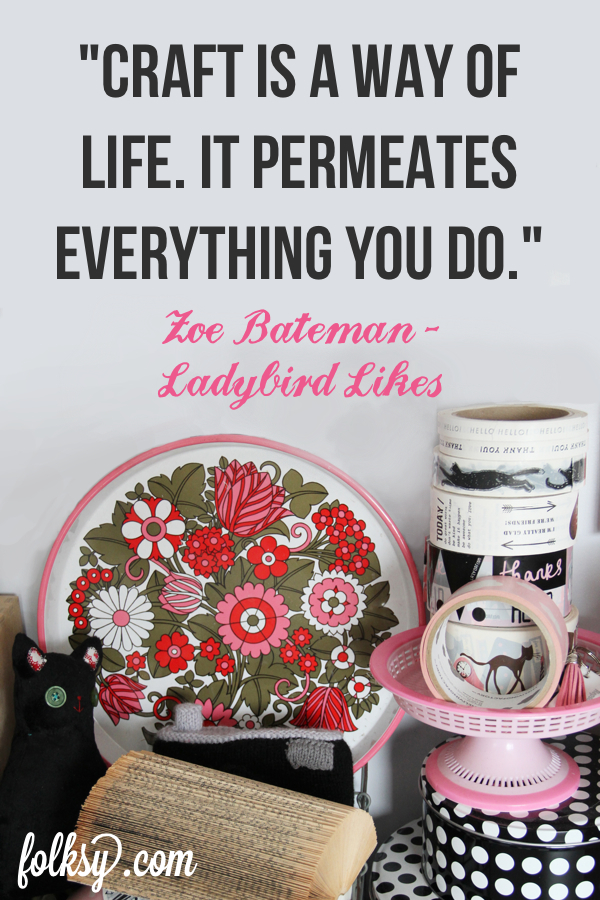 How did Ladybird Likes start?
Ladybird Likes started as a result of my insatiable need to be making stuff wherever possible. I made gifts for all my friends, and they told me I should try and sell them. Obviously I thought they were just being polite, or that they wanted me to stop giving them handmade gifts, but it made sense to try to make a bit of money from my crafting. At first I just hoped to make a bit of money to buy more materials, so I could keep the crafting circle of life turning. But people seemed to like what I was making, and slowly things took off, and I’ve never looked back. 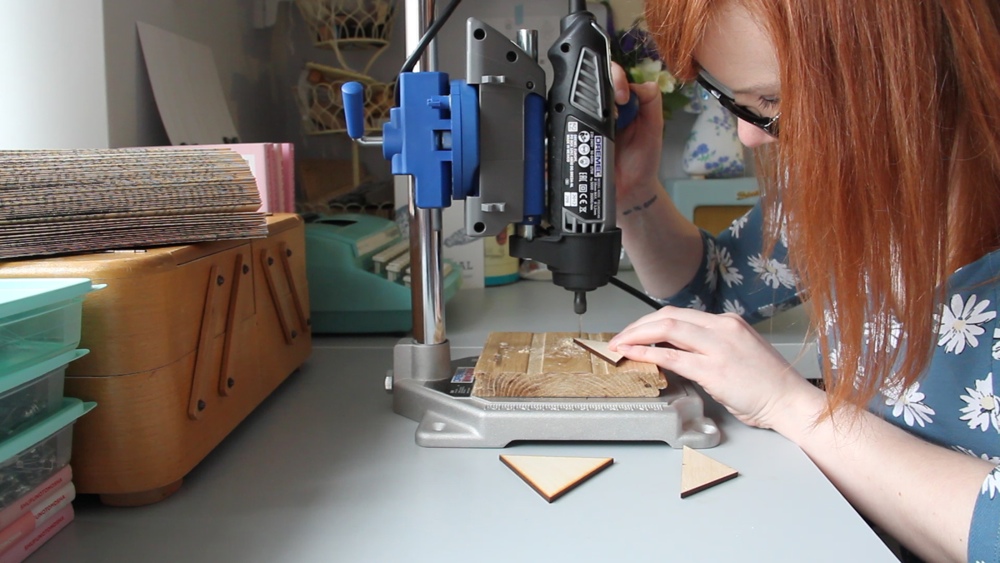 Can you describe your making process? Where do you start?
My making process is a huge big jumble really, like most of my life! I long to be one of those super focused, super minimalist people that works on one idea for months and it comes out perfect and polished. But alas! My mind is constantly turning over new ideas so they tend to start off scribbled in a notebook, or on the back on an envelope/important document! That’s usually where they stay until one day I rediscover them and decide to try it out. 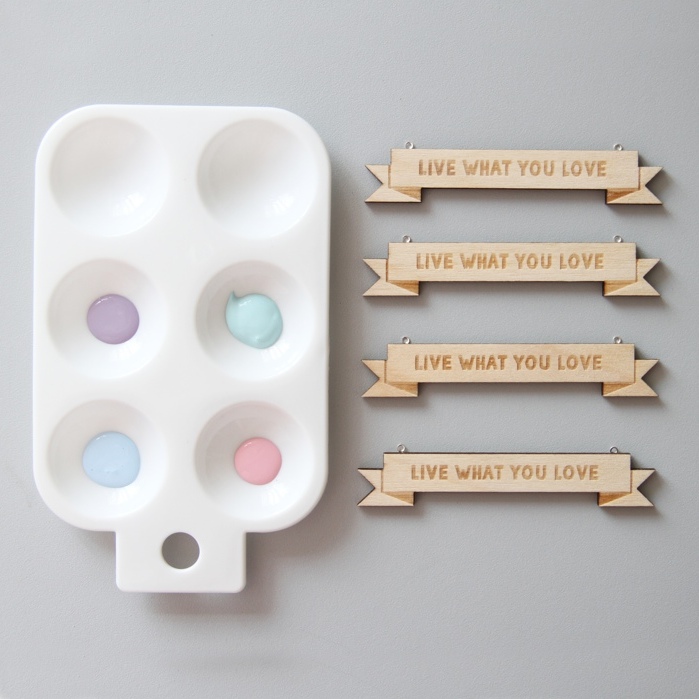 I try to not force ideas – if I suddenly have an idea I need to try out, I will usually drop everything to work on it while I am inspired. Sometimes it works, sometimes it needs to be left for days or weeks, sometimes it needs to be scrapped entirely! If I decide to go ahead with an idea, I make a digital mock-up and print it out to check sizing, and to make sure it will sit right and things like that. Then it gets sent to the laser cutters for samples to be made, before being put into production. 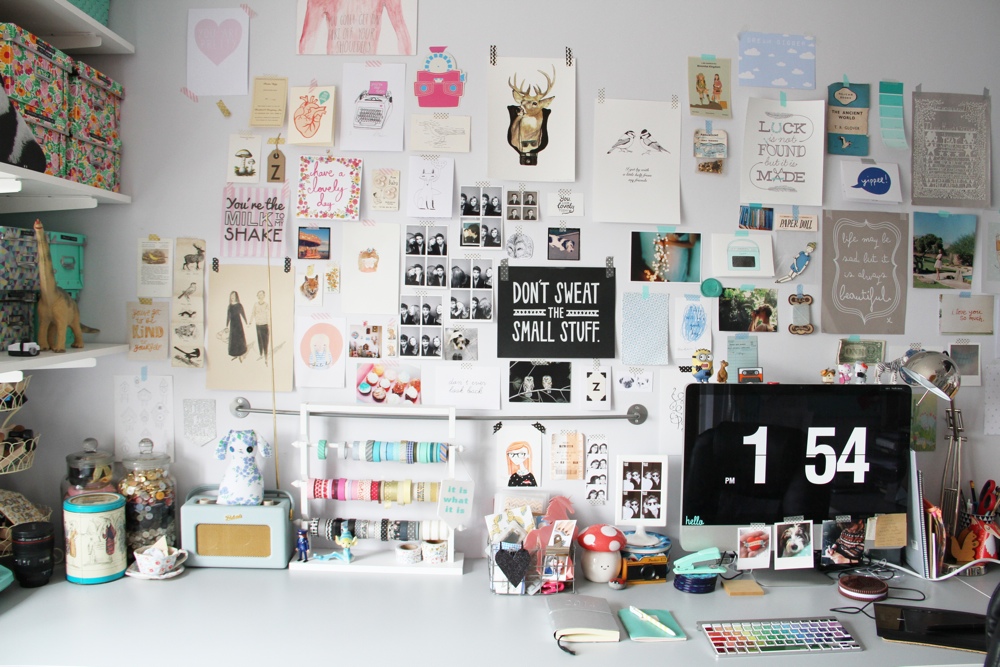 Where do you work?
Of course. My studio is in our spare room at home, so it’s pretty compact. Plus I like to work surrounded by stuff and clutter, so most of my time is spent moving things from one place to another. But I wouldn’t change it for the world! I love nothing more than coming in here, putting on Netflix, and getting creative! 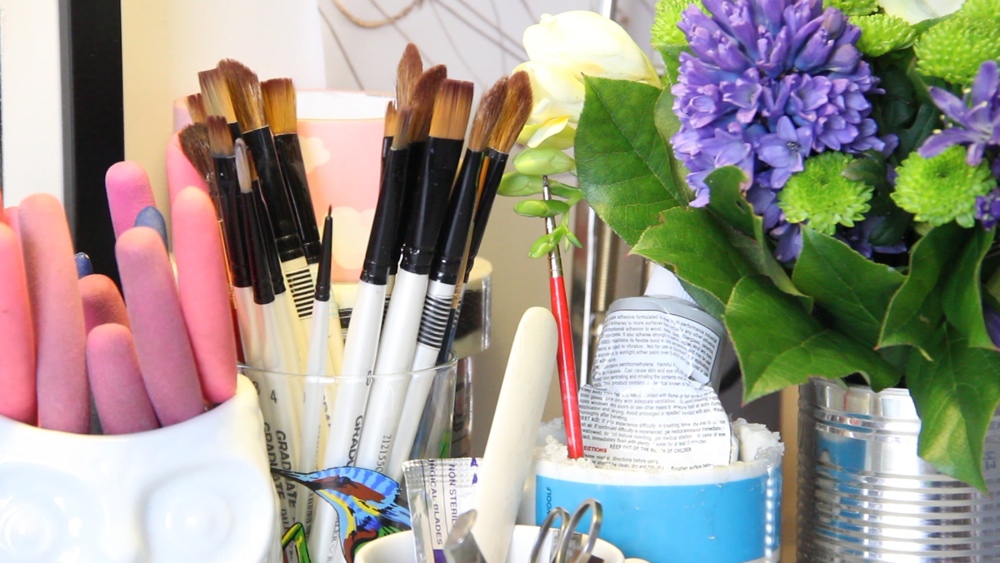 Who are your design heroes?
One of my biggest design heroes is Mary Blair – she worked for Walt Disney back in the day, and is responsible for a way a lot of the early Disney artwork looks, including Peter Pan, Cinderella, and Alice in Wonderland, and played a huge role in shaping the style of their characters. She is also the lady that single-handedly designed the Small World ride for the Disney theme parks. All this during a time when women were only really expected to stay home and keep house. 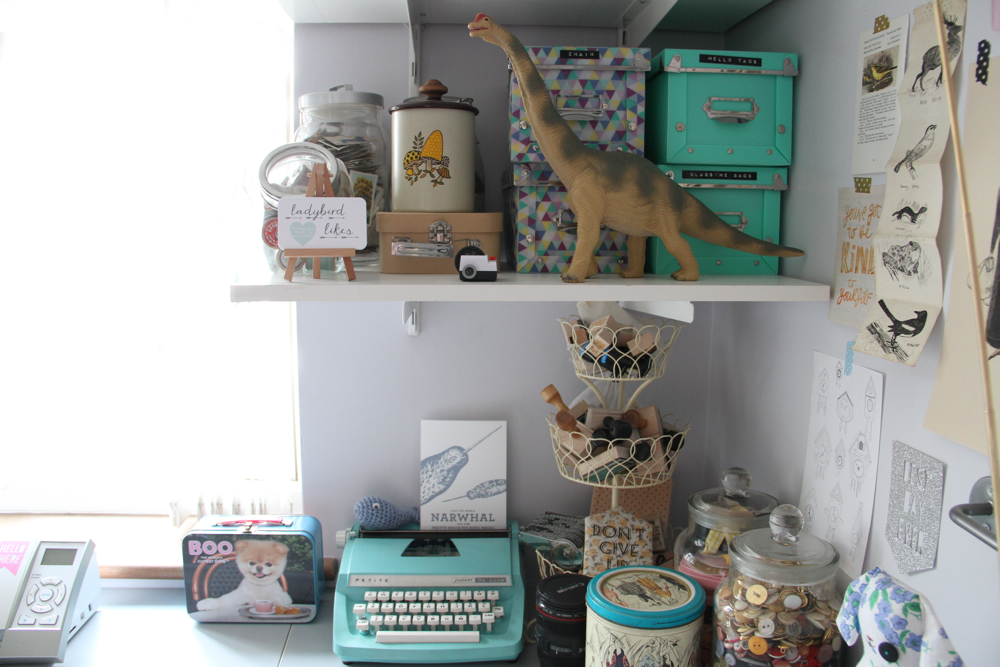 What or who else inspires you?
It sounds clichéd but I am inspired by everything. I always carry a notebook and a little point-and-shoot camera with me so I can jot down ideas or snap a photo of something that gets my creative juices flowing, whether it’s a nice bit of typography in a shop sign or an interesting colour combination. One of the people that got me into crafting is Heidi Kinney from My Paper Crane – her approach is so inspiring. She tries so many different crafts, and crafting permeates every area of her life. She’s endlessly creative, and so ridiculously inspiring!

It’s so easy to make excuses as to why you shouldn’t sell it, and to strive for the ever elusive ‘right moment’ to start selling your work, when really 99% of what you need to know about running a business you don’t learn until you actually do it.

You are a lady of many talents. We even hear you speak Japanese…
Haha! Yes, I speak a very small amount of Japanese (and read and write a little too) as I took a six-month course while I was at university. I’ve never been good at sticking to one thing – although I mainly make jewellery, I also love to crochet, embroider, cross stitch, and I’m taking a sewing course to learn to use my sewing machine properly. 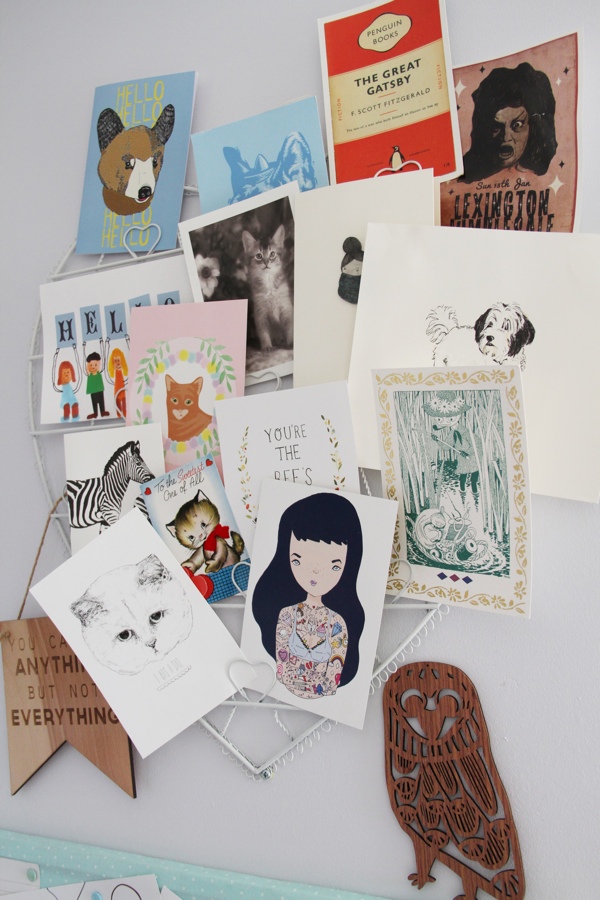 What’s your most treasured possession?
It would have to be the few items of my Nan and Grandad’s that I own – they sadly have both passed away, so I treasure the little things of theirs that I have.

You’re a self-proclaimed horror film fan. Where would you recommend the squeamish should start if venturing into the world of horror films?
I’m a huge horror fan, and me and my sister go to Frightfest every year. My particular favourites are zombie movies, which probably aren’t that great for those who are more squeamish. There is an awesome dark comedy that borders on horror, called Sightseers that I would say is a good place to start. It’s a British film too (whooo!).

How would you spend your perfect day?
Visiting a car boot sale, drinking lots of bubble tea in the sunshine while working on a crochet project, then dancing all night with my best friends. I’m easily pleased! 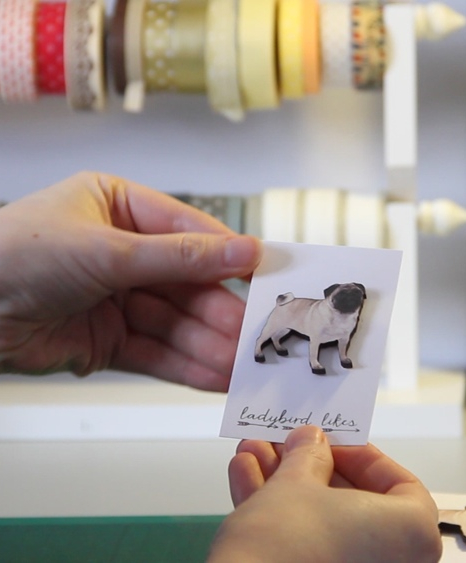 What would you say to someone thinking about selling their work?
I would say GO FOR IT! It’s so easy to make excuses as to why you shouldn’t sell it, and to strive for the ever elusive ‘right moment’ to start selling your work, when really 99% of what you need to know about running a business you don’t learn until you actually do it. The best advice anyone ever gave me about selling my work is that ‘everyone is just winging it’. I always used to look at other designer / makers and be so envious of how together they seemed, and how they had all the answers, but after getting to know lots of them I’ve realised that everyone really is just making it up as they go along!

What does craft mean to you?
Craft for me is a way of life. It permeates everything you do, and your whole approach to life. For me, craft is everything.

Zoe is offering 20% off everything in her shop for a limited time with the code HELLOTHERE. Just enter the voucher code when you check out.

Want to know more?
Read Zoe’s tips on how to make a brilliant craft fair display >>

Who are the designers behind the Lucky Dip Club + Folksy Box? {Part Three}

How collaboration can help grow your craft business

Meet the Maker: The Glass Florist

Meet the Maker: Ebby and Flo

Flynn and Mabel – Meet the Maker

Absolutely love your work. I have just purchased a butterfly brooch.
Congratulations on the article : )