When we first started working with photographer India Hobson, we wanted to get a glimpse into the places where designers and makers really work – not the vast white-walled studios of popular imagination but the real-life spaces: the kitchen tables, living rooms and make-shift printing tables. This became the Revealing Craft book, which was published at the end of 2013. Since then India has gone on to big things, working for The Garden Edit, Uppercase Magazine, Design*Sponge, Oh Comely magazine and Kinfolk to name a few. Two years on, we look back at the project with India and discover some previously unpublished photos…

What were you expecting when you started the Revealing Craft project?
I’m not entirely sure – I imagined (hoped) that we might produce something physical but right at the start we didn’t have definitive plans for the outcome. James, Emily and the rest of the Folksy team really just wanted to find the root of their makers and learn about the processes behind their craft. My aim was to make something beautiful – or at least show the beauty that was there already. Primarily we planned to produce web content to bring a little uniformity to the website and pull everything together but as soon as we started and I delivered handfuls of prints from my first few visits I think we all knew we had to ‘make’ something. 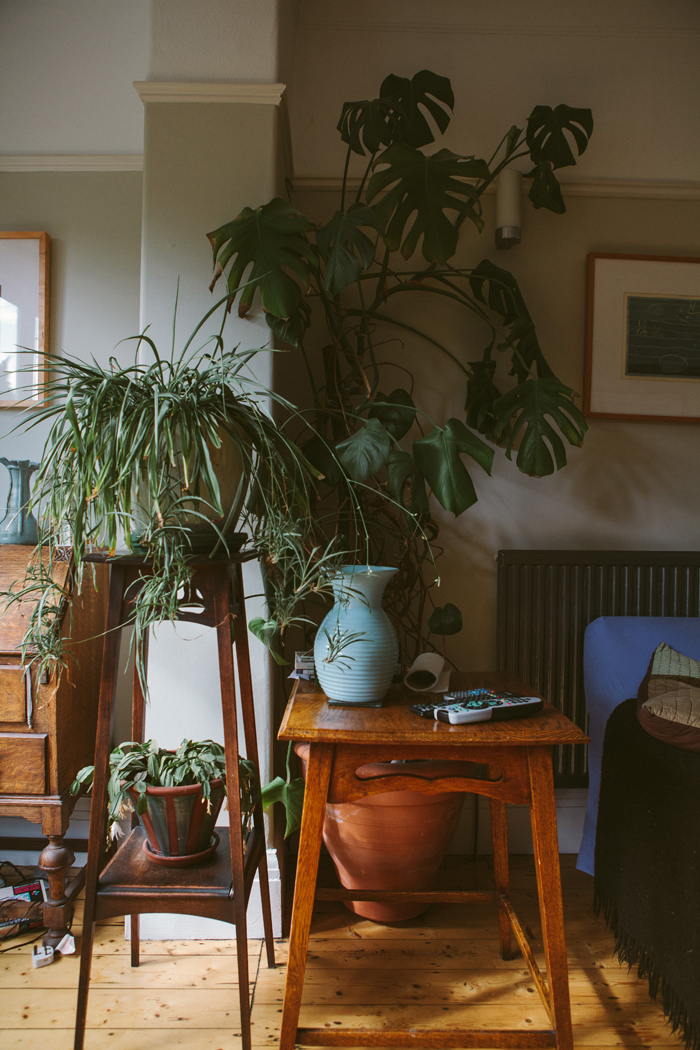 Were the makers’ workspaces as you imagined they would be?
Quite honestly, I thought I’d turn up to beautifully put-together workshops and studios that were found at the bottom of wild gardens. I expected stupendous rays of sunlight highlighting the makers like Vermeer paintings, overflowing paint pots and messy workrooms covered in wood shavings or ink splatters. I was way off – but not in a bad way. Instead there were regular people in regular rooms that were all actually incredibly clean and tidy, in fact I found it really interesting how each person dealt with organising their materials. 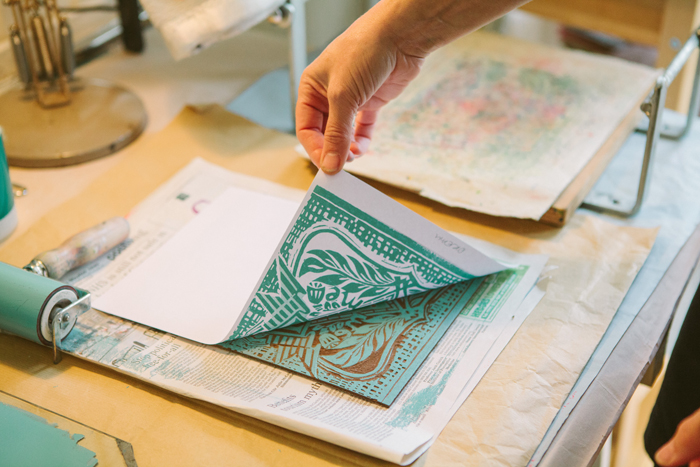 A fresh lino print being revealed in Zoe Badger’s studio

Did you notice any similarities in the way people worked?
Every single person worked differently to the next – most worked with different medium so I couldn’t really compare, although all the printmakers had completely different approaches. I learnt a lot about printmaking. I always thought it was a dirty activity with splatters and drips everywhere but quickly learnt that isn’t the case. Printing is quite methodical and precise so there isn’t really an opportunity for mess, at least not in these houses! I quite liked the varied techniques that were applied and think that in itself is an important message; there isn’t necessarily a right or a wrong way to work, but instead a way that works for the individual. I feel exactly the same about photography as a medium too and find it fascinating to see how others approach a brief.

Craft paraphanalia on the window sill of Debbie Greenaway’s studio

What was the most unusual thing you saw in someone’s studio.
My absolute favourite find was a huge cardboard playhouse made by Camilla and her two daughters – I thought it said pretty much everything about Camilla’s work as Butterscotch and Beesting that could possibly be said, I felt like that was all that I needed to know. Her mind is very special… Play is so so important to her.

I love seeing behind the scenes, and rather than dispel the magic it only strengthens the value of what’s being produced because I then know exactly how much of someone goes into making it

There’s an intimacy about going into someone’s house to photograph it, maybe even more so when photographing the spaces where they create. Are you aware of that when you step inside?
Always. I spend a large part of my working life in ‘borrowed’ spaces; I see the mechanics of people and their work and I feel utterly privileged to be able to do so. I hope to return that trust by painting my subjects in an honest light – hopefully they like that! It’s probably one of the best bits about doing what I do – I love seeing behind the scenes and feeling like I’m a part of something, and rather than dispel the magic it only strengthens the value of what’s being produced because I then know exactly how much of someone goes into making it. 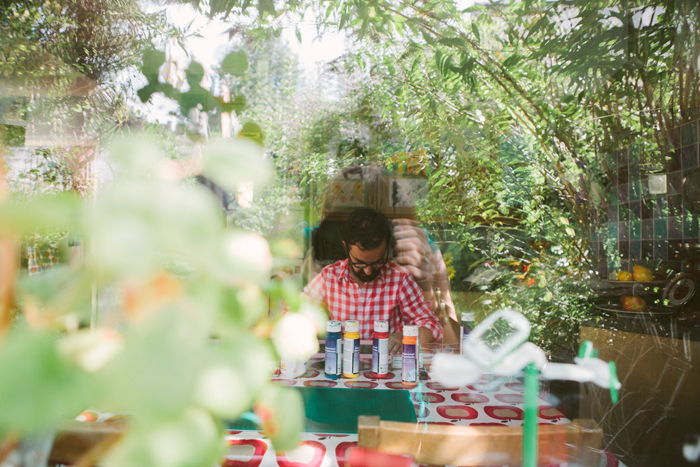 Can you describe your perfect studio?
Quite easily… A room with a skylight and the space to create – as well as documenting factories and artists at work I also shoot fashion and advertising so when I’m allowed to art direct I tend to build sets in my mind… I am very fortunate to have access to that via 156 Arundel St and I’m slowly building up my confidence with the set construction! Obviously light is my main focus, so as long as I’ve got enough to work with then I’m a happy bunny. 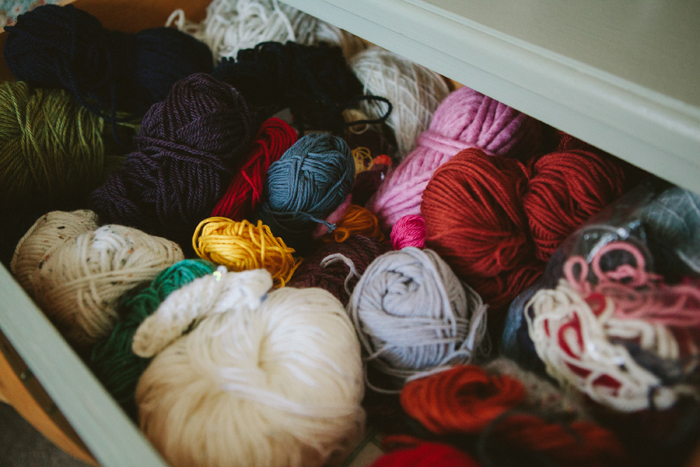 Balls of crochet yarn in the studio of Studio Aitch

You’ve been pretty busy since the book was published. Can you give us a synopsis of your adventures?
Wowsers. I’ve photographed a cactus nursery, Kew gardens and the Barbican conservatory for The Garden Edit, worked on about a million projects with florist Anna at Swallows and Damsons as well as documenting glass bottle manufacture for British Glass. One of the highlights of this year has been visiting Marthe Armitage for Uppercase Magazine – she designs, lino cuts and prints her own wallpaper, which I think is pretty impressive. My work is incredibly varied and I consider myself very lucky to be able to do work in different genres. 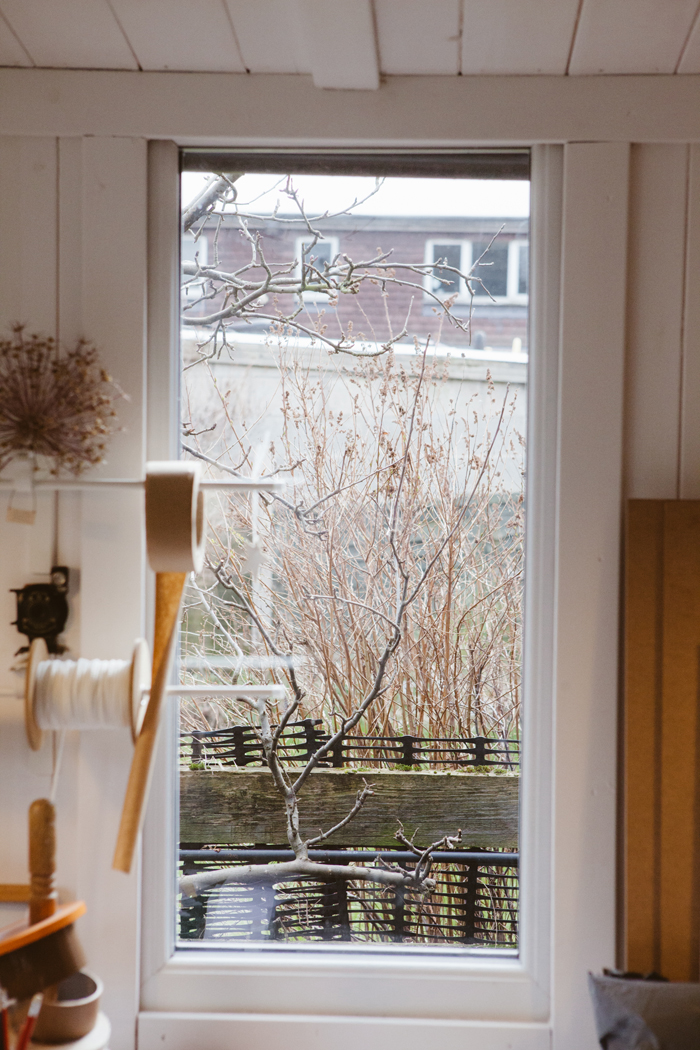 The view from Helen Hallow’s studio

At the book launch you said that having a book published was one of your lifetime ambitions. What are the others?
I have a list of people I’d like to shoot for/with and at the moment I’m working on a collaborative-something that is certainly ticking a few boxes. My wants are quite simple really: I’d like to feel like I’m cheating at life because I enjoy my work. There are some fashion brands that I wouldn’t mind working with (Toast, Cos, Whistles) and editorial names that I’d like to build relationships with – I’m already quite lucky to have names like Kinfolk and Oh Comely on my client list.

I like to think with Revealing Craft we have brought something new in a special format, something unexpected and a beautiful, tactile object

Do you think there will be a Revealing Craft: Part Two. How would you continue the story?
It’s most satisfying to see my images in print and there is always scope in that direction… I thoroughly enjoyed the process – including the Kickstarter campaign too; it was great to feel like I was truly supported by those who bought copies of the book. I like to think we have brought something new in a special format, something unexpected and a beautiful, tactile object. I think I’d love to see a ceramicist at work, perhaps woodwork or paper cutting – traditional letterpress typesetting has always wooed me too, so perhaps there is something in that but I haven’t given it much thought. I think I’m still digesting this one, it’s a lovely thing to keep returning to.

The evolution of a craft book by Michael...