Popular Posts
Buy Less, Buy Better, Buy Handmade
Craft Fair Secrets – How to Make a...
How to take product shots on your phone
How to sell more at markets, craft fairs...
Craft Fair Secrets – How much stock do...
How to choose the right social media channel...
Meet the maker: The Cornish Coaster Company
Craft fair inspiration – big ideas for small...
Meet Sara Tasker from Me and Orla –...
The best Instagram hashtags for craft and handmade
How to find your confidence as an artist...
10 fun gifts for teachers to make with...
The best Instagram challenges for makers & why...
Craft Fair Secrets: Not sold much? Here’s why...
Everything you need to know about tax if...
Meet John Bloor – the printmaker carving beautiful...
Home Seller TipsCraft Fair Reviews Trade Show Review: British Craft Trade Fair 2016 in Harrogate
Craft Fair ReviewsTrade Show Reviews 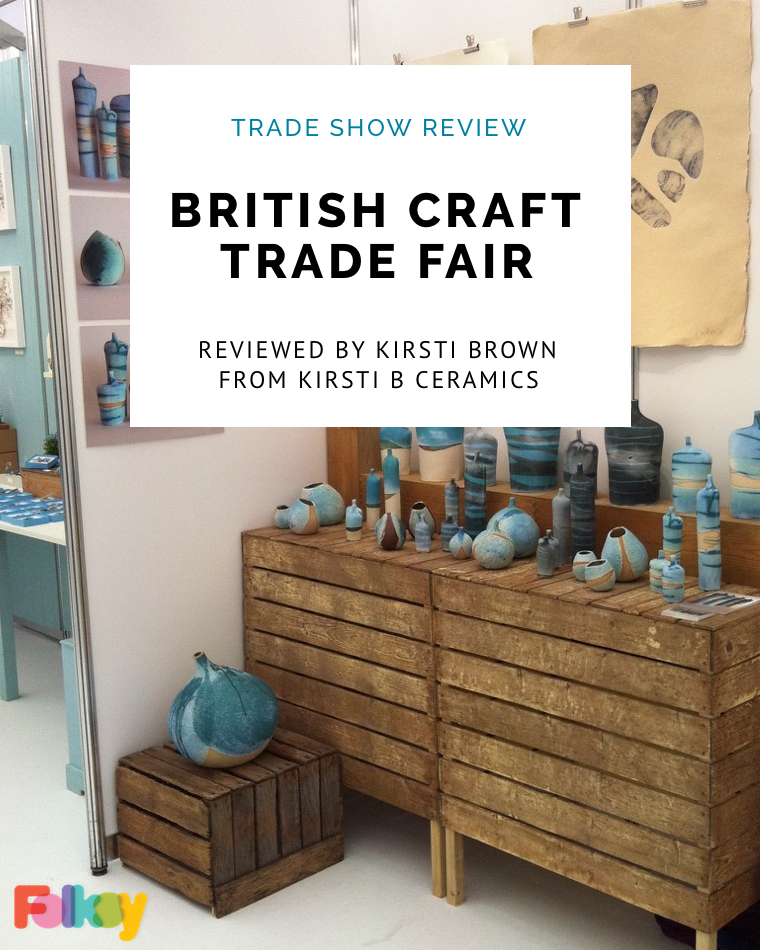 Which craft fairs and trade shows are the right ones for your handmade products? Which ones are worth your time – and your money? To help you choose the best craft markets and trade shows for you, we’ve asked Folksy sellers to review some of the events they have exhibited at. Here Kirsti Brown from Kirsti B Ceramics reviews The British Craft Trade Show which is held every year in Harrogate and is launching a brand new London fair this September.

Trade Show: British Craft Trade Fair (BCTF)
Reviewer: Kirsti Brown from Kirsti B Ceramics
Dates: 10th – 12th April, 2016
Venue: The Great Yorkshire Showgrounds, Harrogate.
Cost of stall: 2016- £600 including VAT for a 2m x 1m stand
Who came: Gallery owners and buyers, both independent small businesses and galleries such as Oriel Mostyn, Bluecoat Display Centre, Ruthin Craft Centre, Leeds City Art Gallery and Museum and Yorkshire Sculpture Park. Also, interior designers, designer makers and students.
Footfall: There were 4,300 visitors over the three days. Sunday and Monday were the busiest days in terms of buyers, whereas the majority of visitors on the Tuesday seemed to be students and other designer-makers. Peak times were 11am to 3.30pm.
Sales: I was delighted. I picked up 10 new galleries, plus three galleries who want to stock my work after my 12-year break and four exhibition opportunities. I was relieved as well as happy.

It had been 12 long years since I last exhibited at the British Craft Trade Fair (BCTF) in Harrogate. That time I had gone accompanied by my eight-week-old baby daughter and my very helpful husband (needless to say, they received more attention than the over-tired potter). Once home and trying to make pots again, I realised I had to take a break and bring up the little people. So with the baby now in secondary school and her sister happy in juniors, 2016 seemed the ideal time to re-launch my ceramics to the wider world, starting at the BCTF.

I was excited and nervous. Had I got it right? Publicity, images, price lists, display… and would anyone want to order my pots? All these thoughts were turning round and round in my head in the weeks running up to the trade fair. 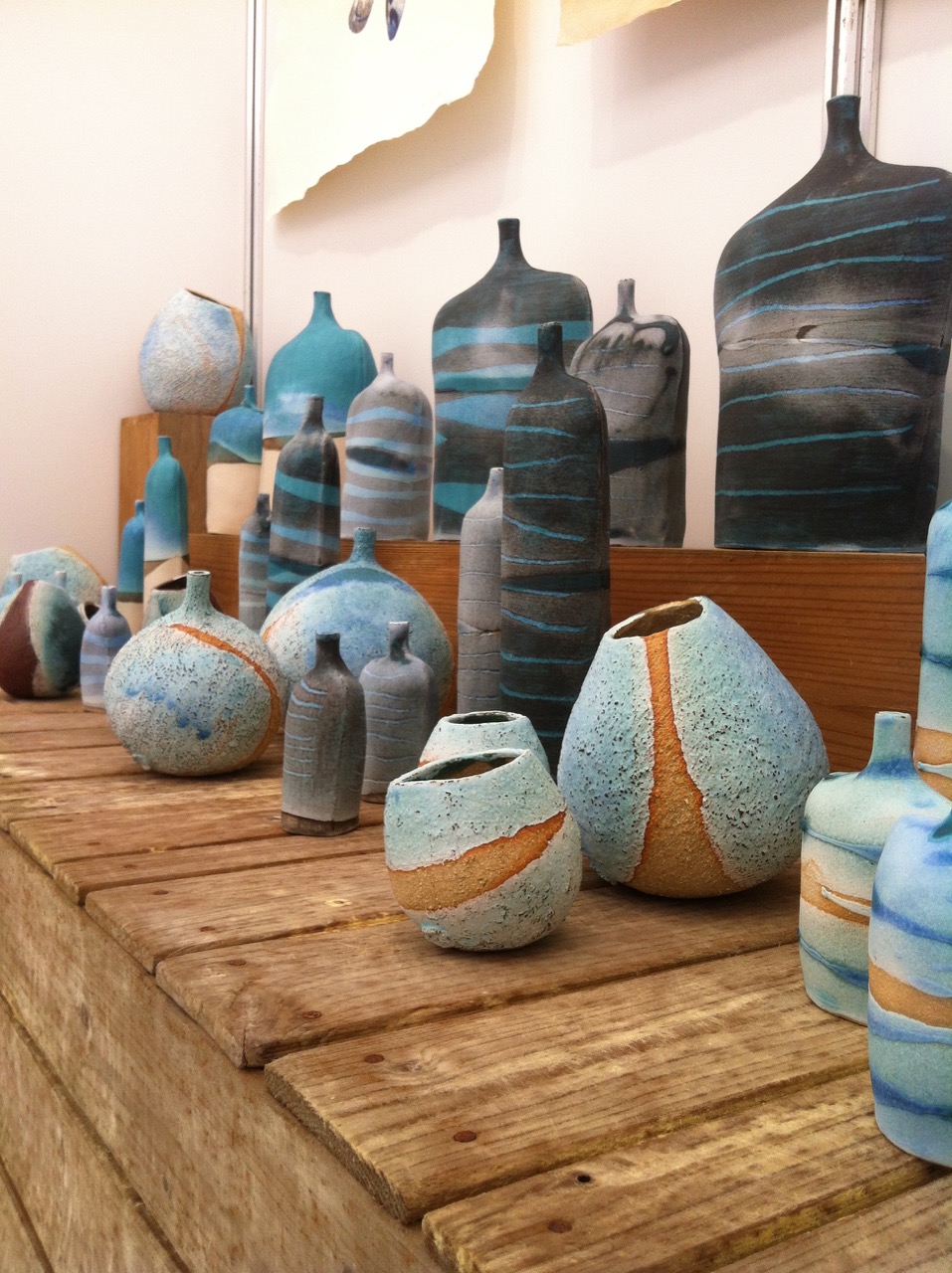 In the end, setting up was relatively easy. We had planned well in the weeks before, decided on the theme for the display, designed the space (1 x 2 meters is quite compact) and sorted the marketing material. Once setting up was complete and I had delivered my husband to Leeds station to enjoy a four-hour trip home, I joined glass artist Verity Pulford in her little caravan for a tasty tea and a glass or two of red wine. We woke up on Sunday morning to a beautiful frosty and sunny day, in our best dresses and lovely new shoes (what better reason is there?), ready to face the fair.

The show looked great. The organisers do select the makers and the work has to be handmade and British – the clue is in the name really. The makers there had made a huge effort to personalise and theme their stands, and the quality of work on show was also excellent – it had improved greatly during my 12-year absence.

I had a great show. I took lots of orders and now have exhibitions lined up into next year. For me, the BCTF was well worth the outlay and worry. One of the best aspects of the BCTF, though, is the people you meet. All the exhibitors come from a similar standpoint, so support, friendship and a good laugh are abundant – and social media helps to keep the camaraderie going after the show has finished. 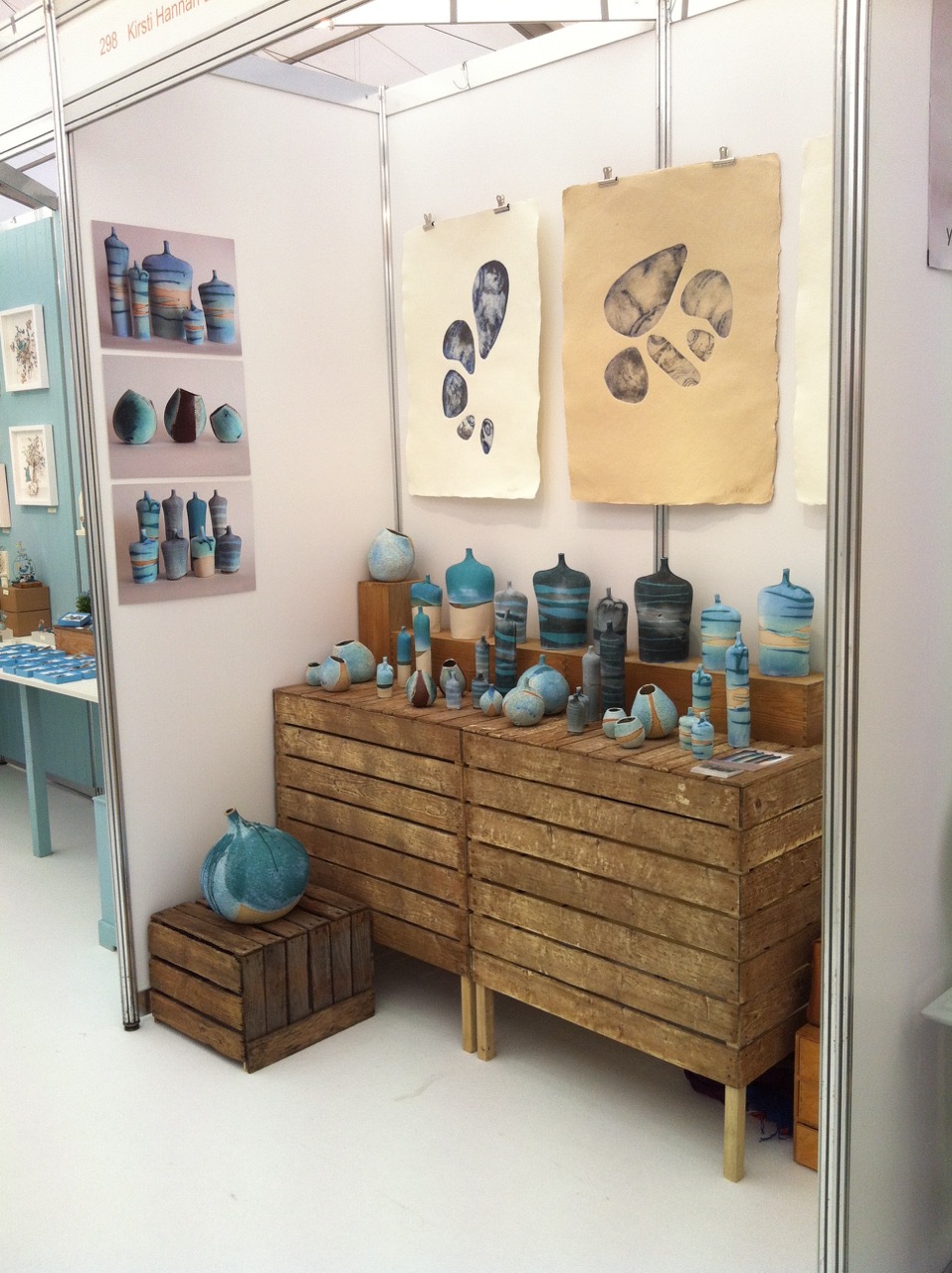 One thing that was clear to me since the last BCTF show I took part in 12 years ago, was that this time round there was a much greater use of technology. Some use in their work – such as laser cutting and water jet technology – but many more makers use technology to promote their work on social media, before, during and after the fair. Personally, I’m trying to put something out there everyday, just to keep the momentum going. The other thing I noticed was that it’s now much easier to create printed marketing material for the fair. That was a great revelation. Uploading images on to sites for business cards and flyers as well as poster-sized photographs is so straightforward and you don’t need hard copies any more – you can just upload images directly from your computer. Everything can be delivered so quickly too, so it’s much easier to create a professional image – a real bonus! 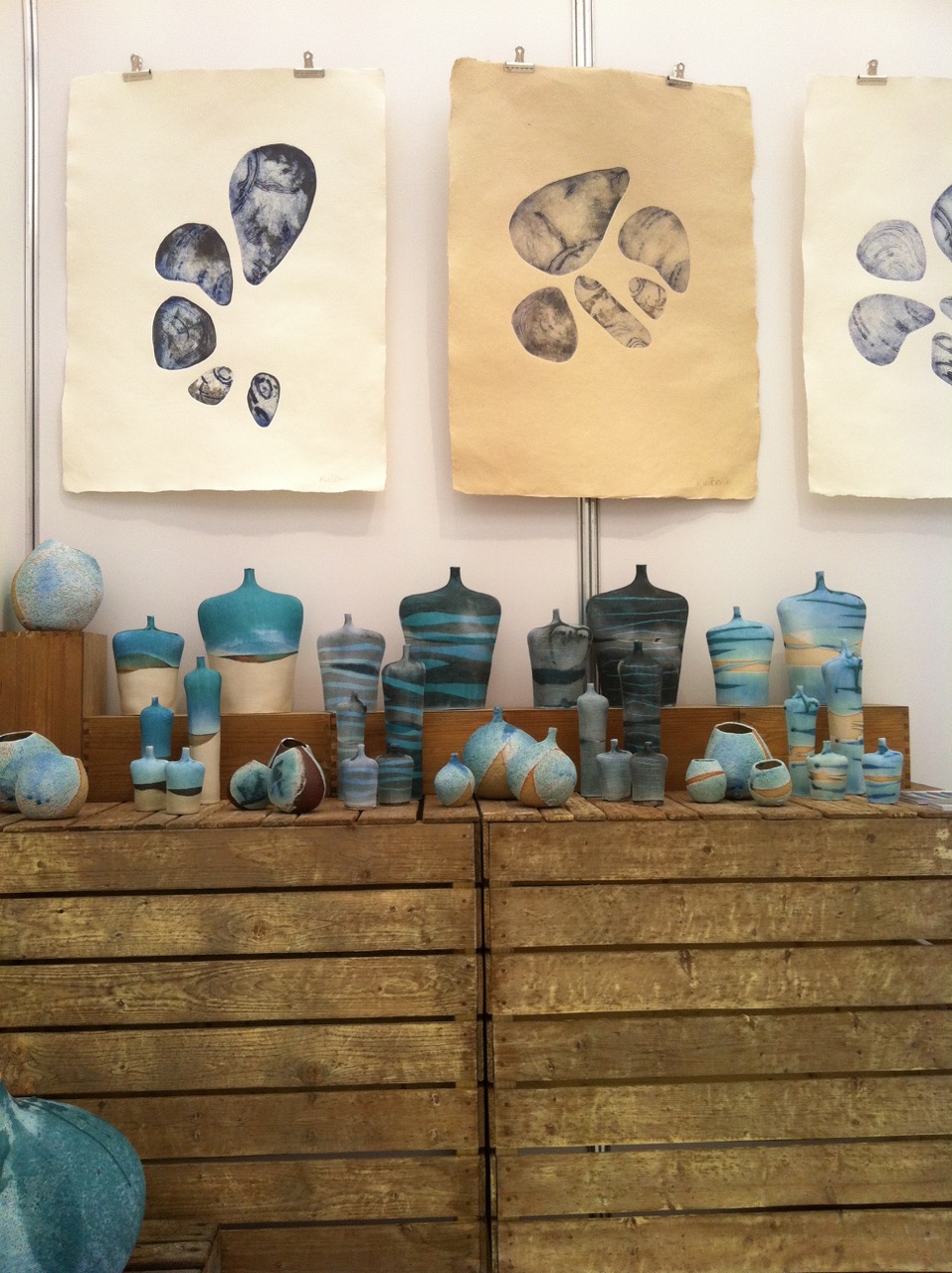 Here are some of the other Folksy makers I spotted at the BCTF this year:

I was next to the delightful Linda from Beastie Brooches, who gave me my first order too, for her little gallery in Jedburgh. A very busy and popular lady, Linda will be assembling Beasties for many months to come. Verity Pulford had an excellent show and this was the second time she had attended. Sophie Hopkins was there too and won an award as a newcomer for her delicate verdigris hand-raised copper bowls and jewellery. I also spotted Jennie Jackson and her bold printed textiles, as well as Hazel Williams who also won an award! 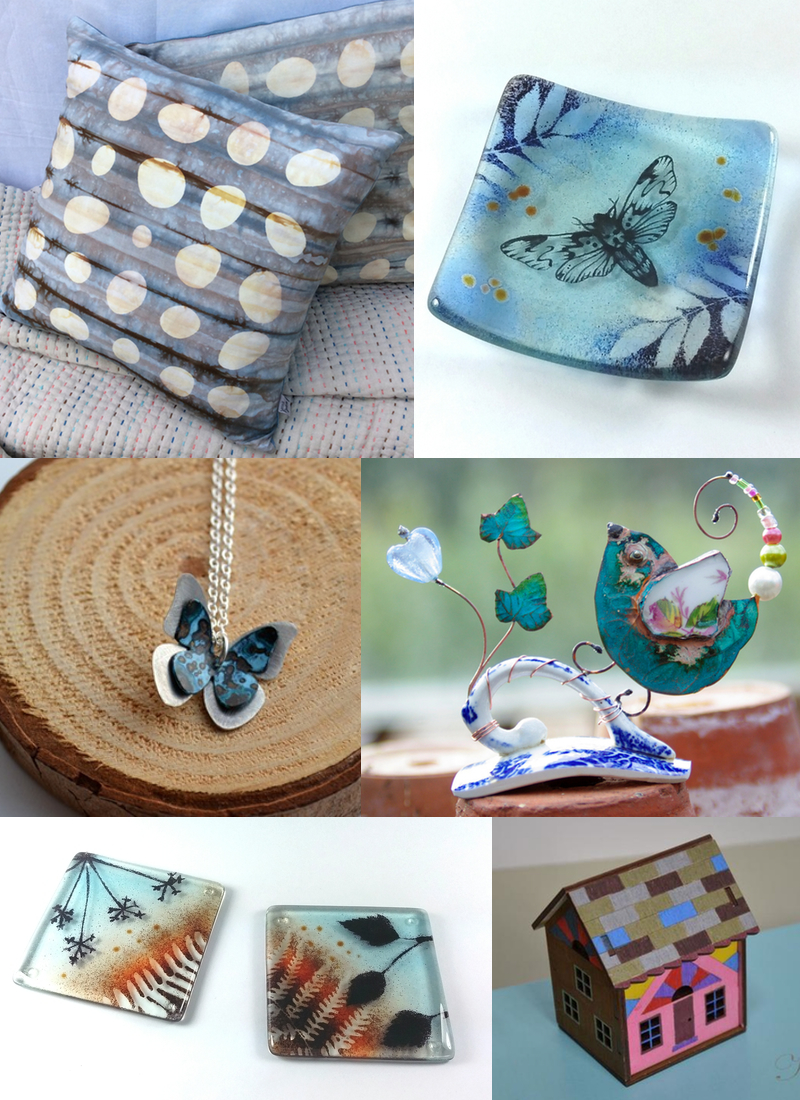 Hi Kirsty
We were there too! You can just see our stand in your last photo! Glad you had a good show, it was our second year at the BCTF and we love it, the buyers are so friendly and the show has such a lovely relaxed atmosphere. We will be back in 2017 it would be lovely to meet you.