Letterpress designer Emma van Breukelen from Ellie Press has been drawing since she was a toddler but believing art wasn’t a ‘proper’ career choice, she went for a career in project management instead. When the chance came to take voluntary redundancy, she jumped the chance to do something creative and spend more time with her young family. She happened upon a course in letterpress printing, and now, thanks to a restored printing press called Betsy, she has forged a new career that combines her love of animals (especially rabbits) with doodling. We talked to Emma to find out more…

Can you introduce yourself and describe what you do?
Hello! I’m Emma van Breukelen and I work from my small home studio in Buckinghamshire creating letterpress stationery and bespoke wedding invitations as Ellie Press. I’m a mum of two children – a car-obsessed boy aged five and a mermaid / tomboy karate lover aged eight. I’m ever so slightly obsessed with gin, wine, rabbits and pens! I also love hanging out with my virtual friends every week in #folksyhour. 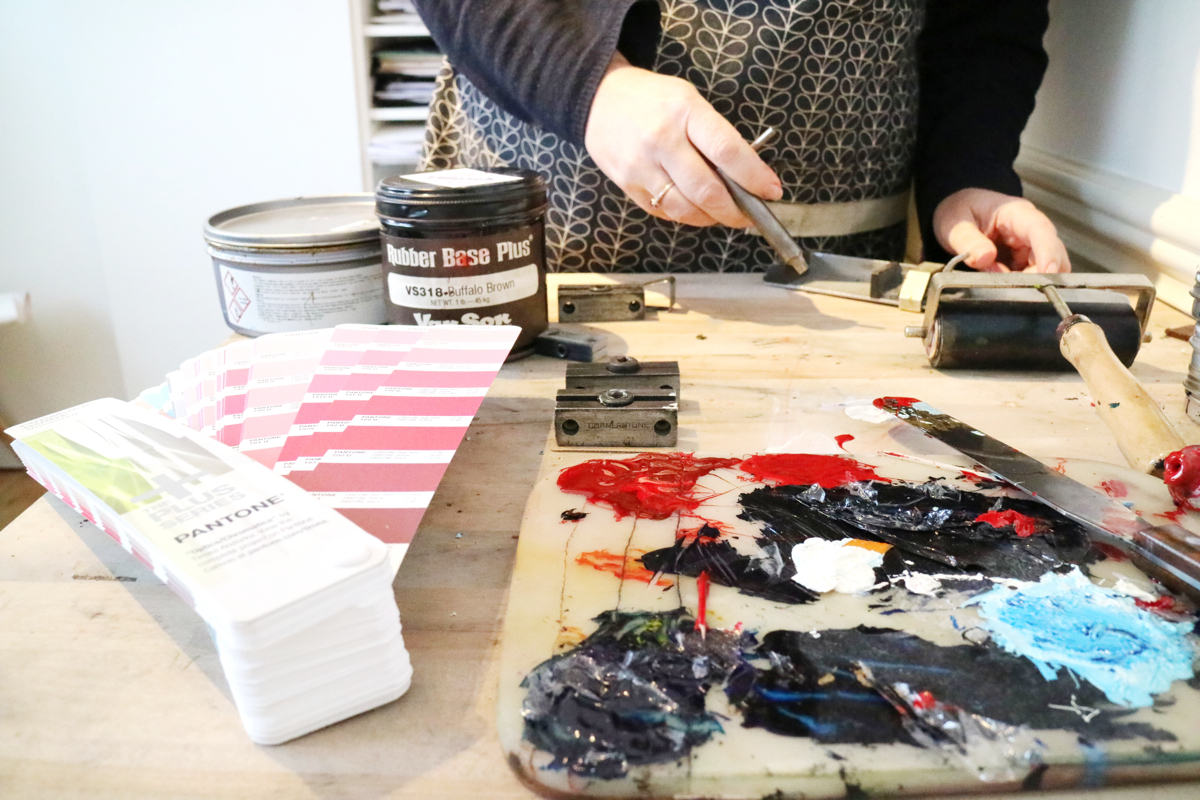 My parents joke that I doodled in the crib! They would find small pencil drawings on the toilet wall when I was a child.

Can you tell us a bit about your background? Have you always been creative?
My parents joke that I doodled in the crib! They would find small pencil drawings on the toilet wall when I was a child. As I got older I never saw art as a career choice and because I was obsessed with animals I went into the sciences, studying zoology and marine biology at university. I continued to draw as a hobby or for relaxation but I never really thought about doing anything with it. 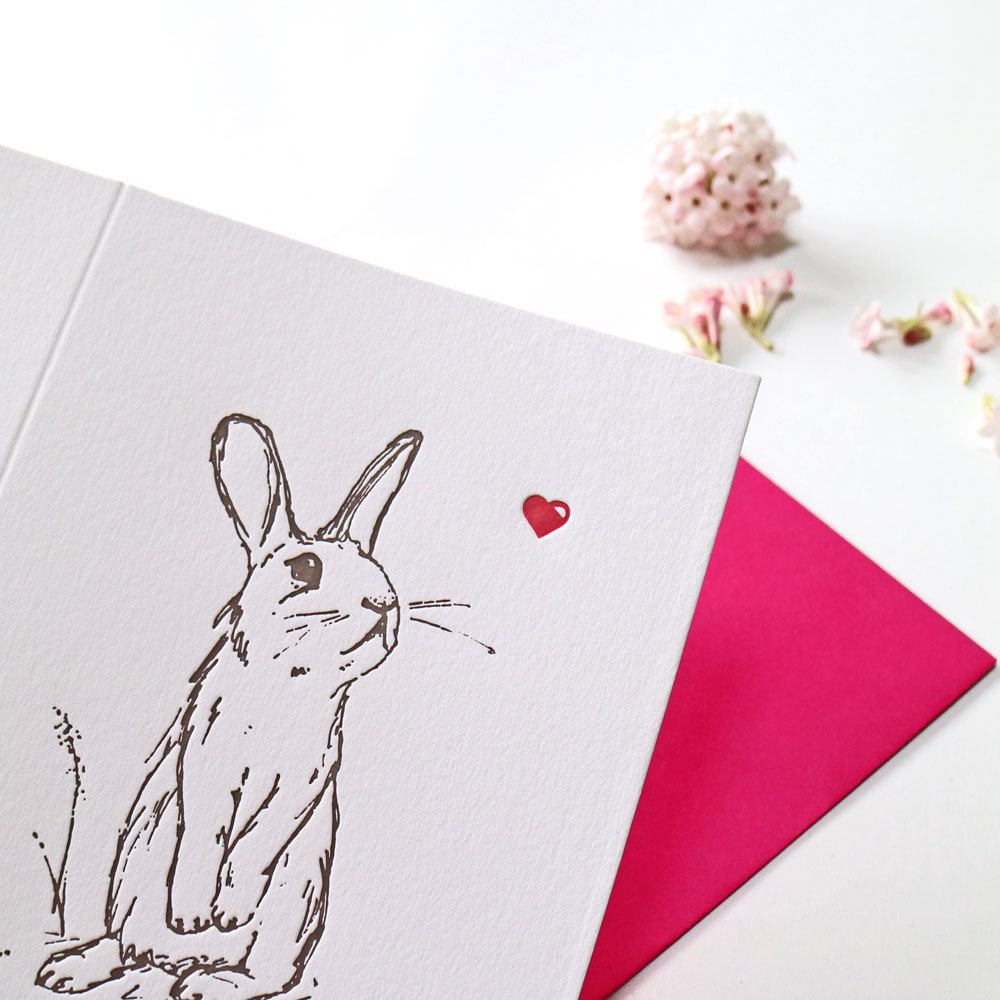 I’ve always loved all animals but I have a particular soft spot for fluffy bunnies.

So what happened? How did you move from a career in science to professional letterpress designer?
In 2013 the company I worked for was making mass redundancies. I was super excited as I was struggling to focus on my children, juggle commuting to London, managing a team of 10 part time and my husband was away travelling a lot too. I sat down with a careers coach who asked me quite simply what was more important to me? Was it my career and money or my children? There is such a pressure on us to ‘be everything’ and I’d never really stopped and thought about it in a calculated way. l needed to put the children first and find something I could do to work around them, so I saw it as a chance to do something creative and happened across a letterpress course. I fell in love with its history, its tactile and luxurious feel, the smell of ink and I also felt it was something quite ‘niche’ that I could do something with. I then spent over a year refining the techniques and learning as much as I could by trial and error before I was ready to produce any products… let alone attempt a wedding! 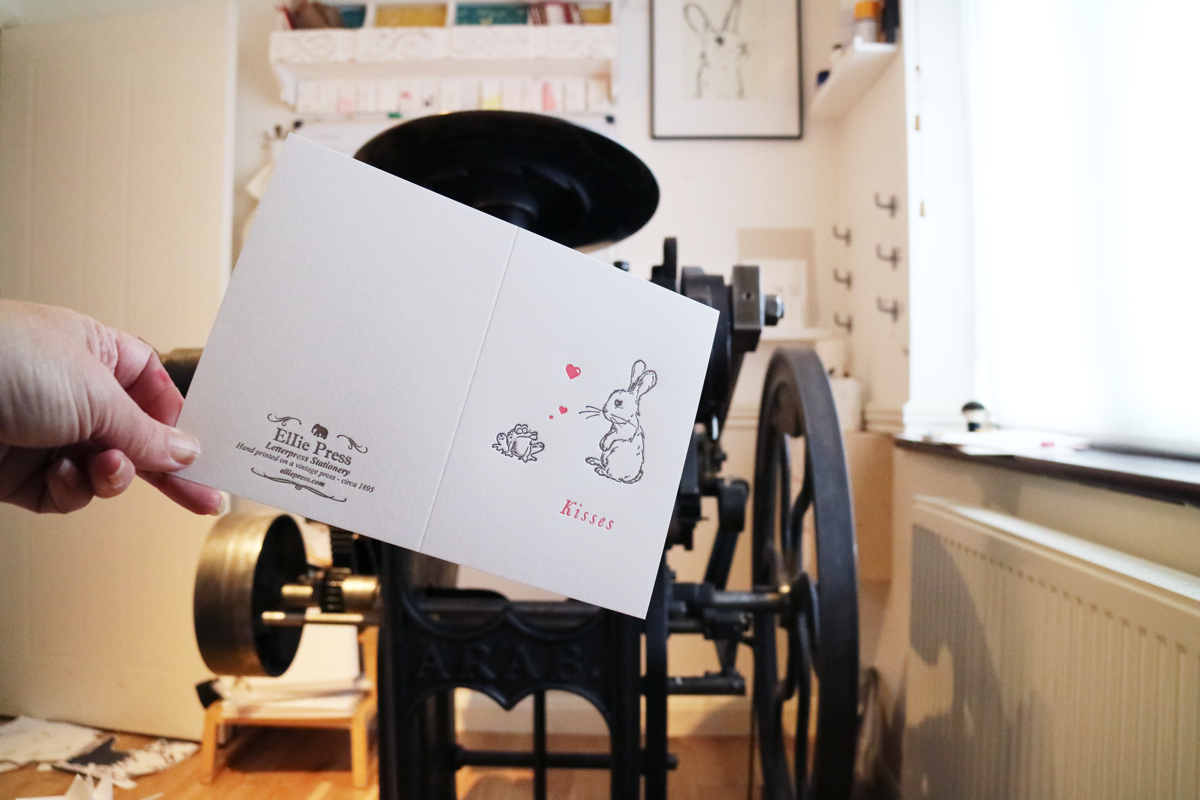 I fell in love with the history of letterpress, its tactile and luxurious feel, the smell of ink and I also felt it was something quite ‘niche’ that I could do something with.

How do your letterpress pieces start?
Each new piece of work starts as a scribble, then I use a light pad to define that scribble into something I’m happy with. There are times when I spend hours on a drawing and it just doesn’t work for me, so I put it away and maybe pick it up again later, maybe never at all. Other times a scribble evolves quickly and it just falls into place quite naturally. My scribbles are then refined and scanned into the computer. I use Adobe Illustrator to lay out the artwork so it’s in the right format to send off for plate making. The plates are made from a hard polymer, which creates that lovely ‘impression’ in the papers when my press, Betsy, applies pressure to the card stock. 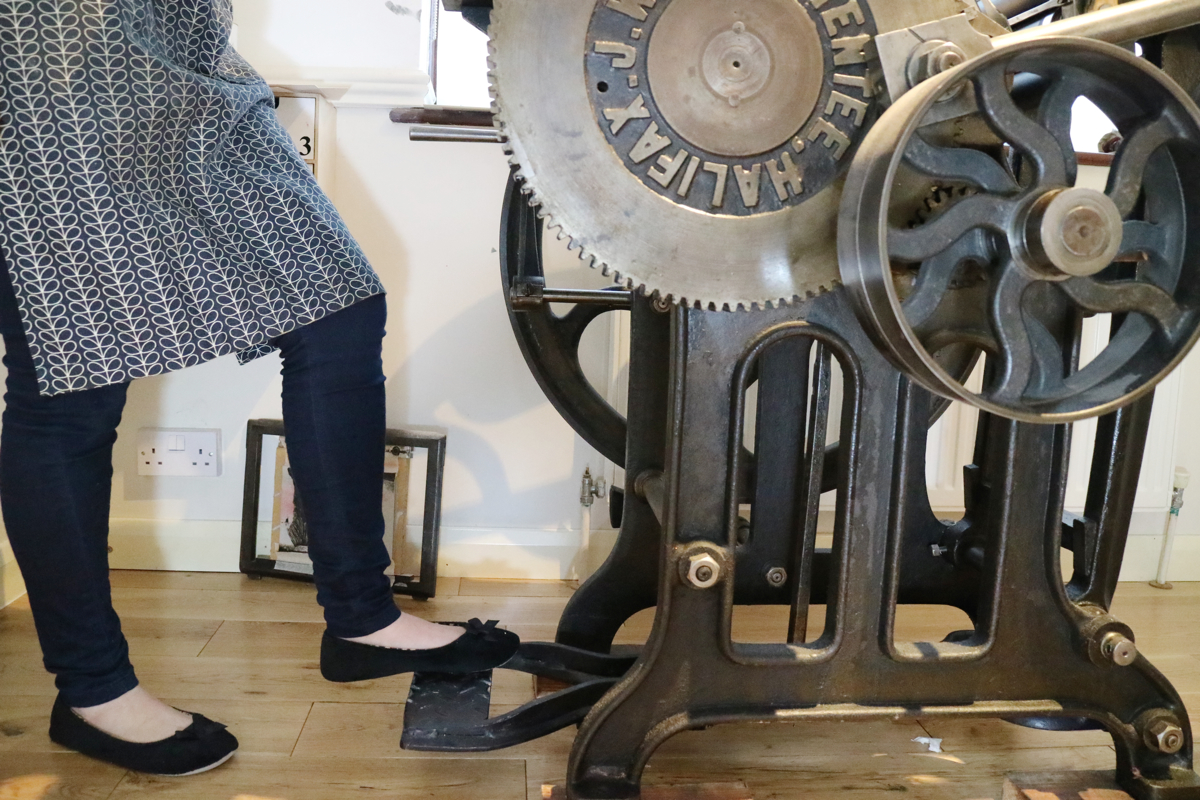 My press, Betsy, was owned by a retired hobby printer and when he passed away she was left rusting in a shed.

We’d love to know more about Betsy. Who is she and where did you find her?
Betsy is a foolscap Arab Platen Press and she is over 120 years old (made in approximately 1895). She was owned by a retired hobby printer and when he passed away she was left rusting in a shed. I worked with a company to get her restored and I like to think he would have been proud to know she’s back to how she would have looked in her heyday and working again. 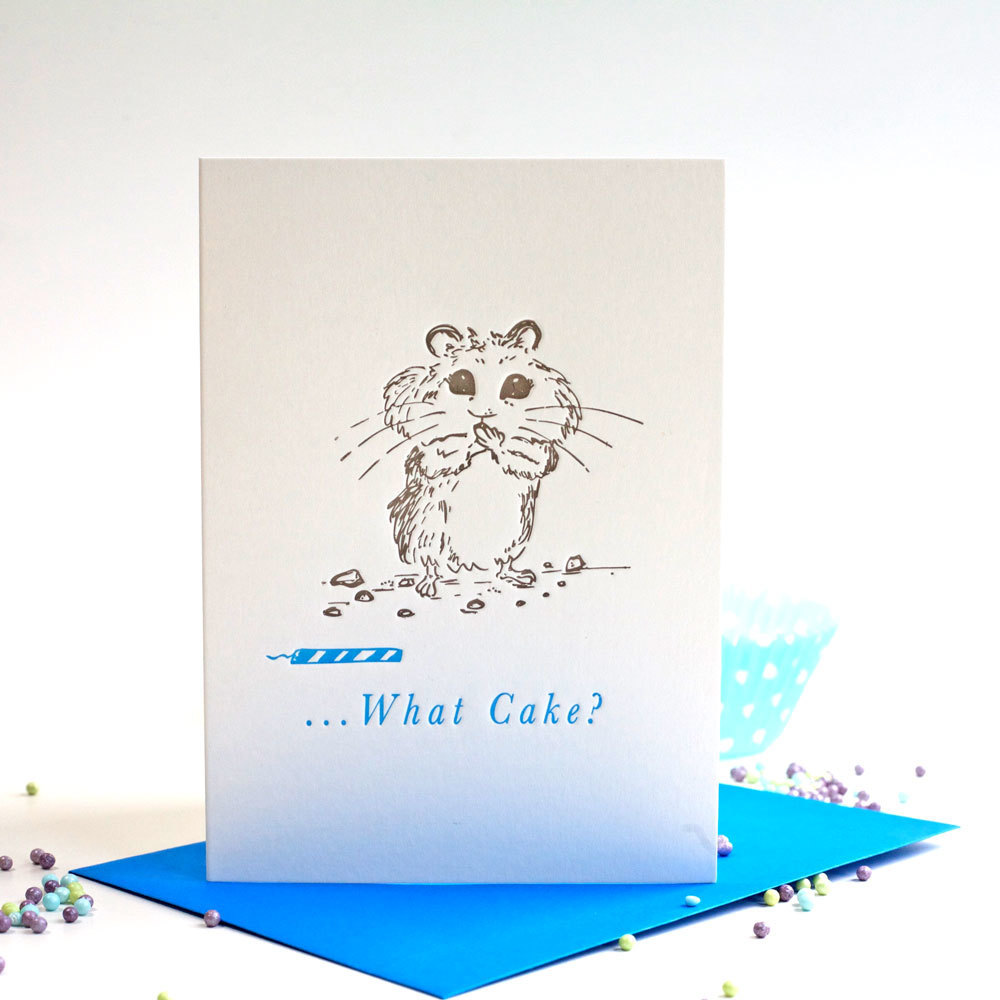 Where do you look for inspiration?
I find inspiration in anything and everything! I have too many ideas and a zillion notebooks flung in every corner of the house. Each of the zillion notebooks is filled with sketches, some of which may or may not turn into a piece of work. I’ve always got a notebook next to the bed and I even sit sketching in the bath. The hardest thing to do is to channel those ideas and to stay focused, as otherwise I have a hundred things on the go at once but no finished products to show for it. At the moment I have at least 10 product ‘prototypes’ that I haven’t got to the final stages yet! 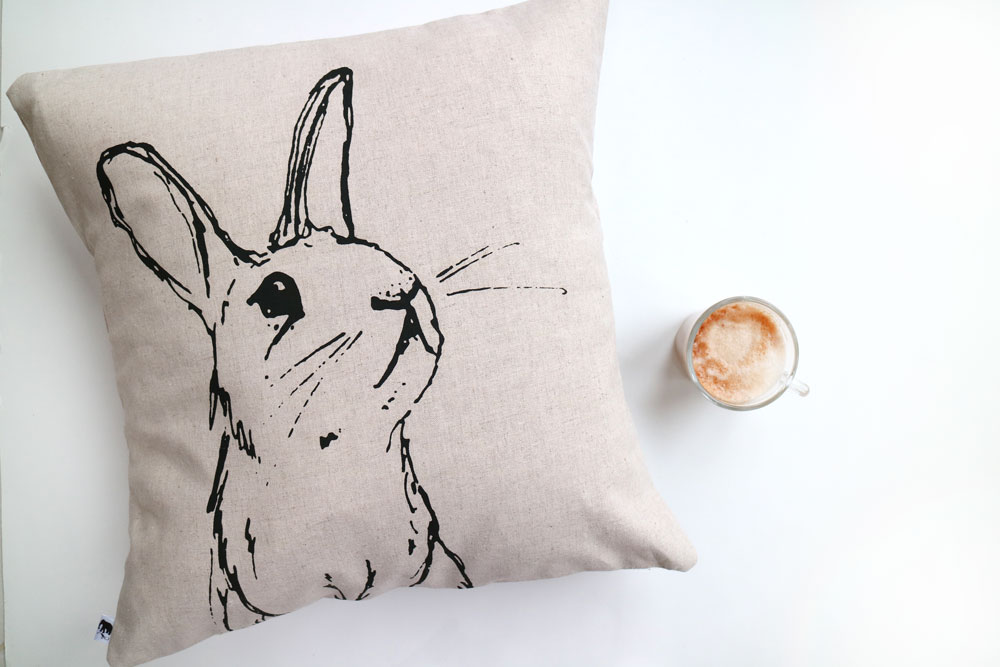 Why all the bunnies?
I always had a rabbit as a child and each one had its own distinctive personality. We had ones that bit your ankles and ran after you as soon as you opened the cage, ones that liked to lick your arms, ones that thought they were dogs and there was one that liked to sit on my shoulder like a parrot. I’ve always loved all animals but I have a particular soft spot for fluffy bunnies. 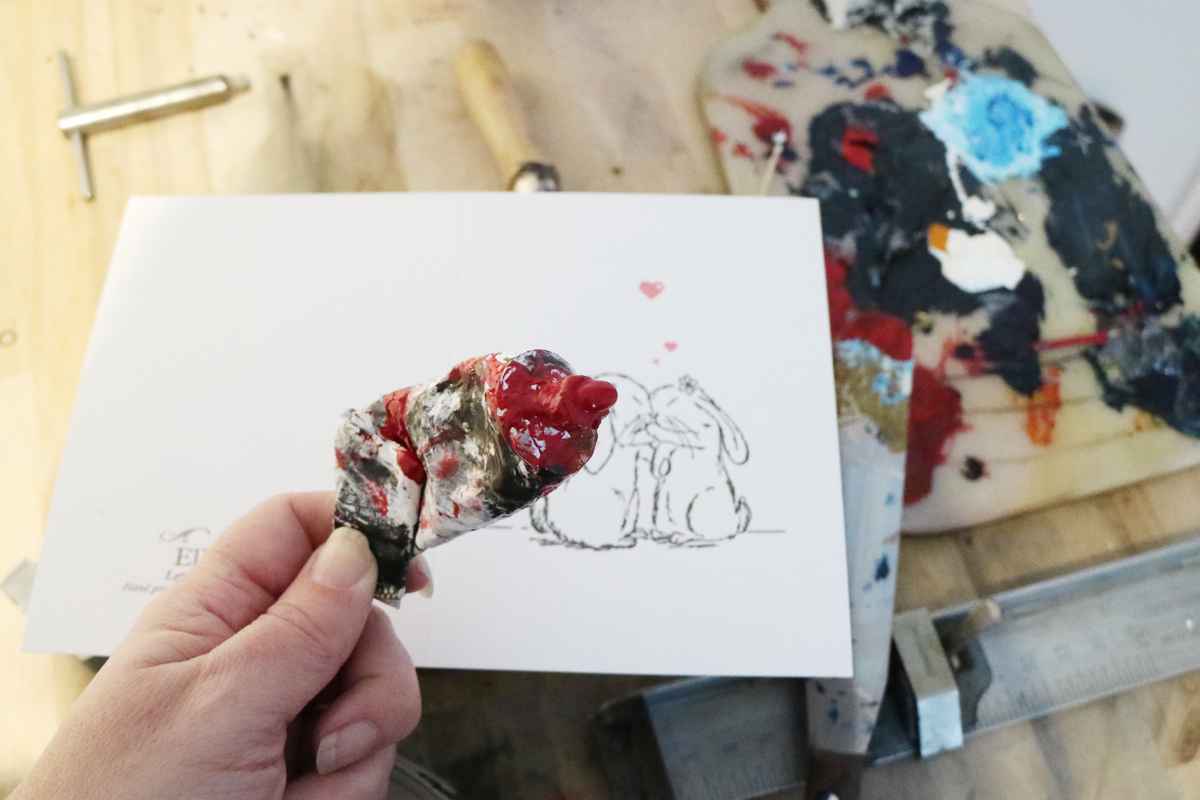 I often get called Ellie and it happens so frequently that I don’t bother correcting anybody. I get some surprised looks from friends of mine when I chat away to someone who has called me Ellie.

Tell us about your studio. Where is it, what does it look like and what’s your favourite thing in it?
My studio is the original ‘dining room’ (does anyone use those anymore?) and it’s measures just 2m x 3m. Betsy has to be my favourite thing in it. She takes centre stage and she’s so large that she had to be assembled inside the room itself. If we ever move house I have a large problem on my hands. I have a small desk with my computer and lots of shelves for inky things and tools. But I often take myself off to the kitchen if I want to draw, as it’s nice and has a lot of natural light. 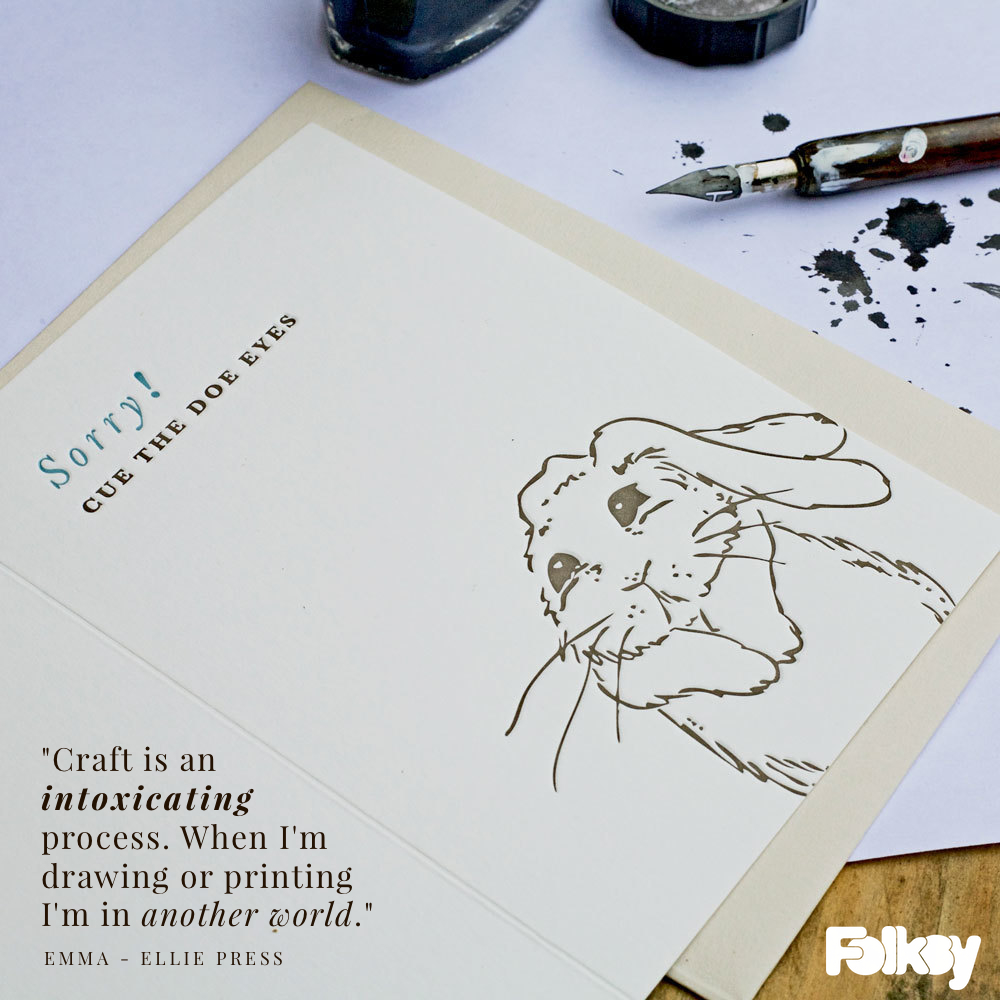 Craft is an intoxicating process. When I’m drawing or printing I’m in another world.

What does craft mean to you?
Craft is an intoxicating process. When I’m drawing or printing I’m in another world. I liken it to a musician being ‘in the zone’ when they’re playing an instrument… momentarily you can think of nothing else. My friend calls her sewing ‘therapy’ and I think that’s a great way to describe the escapism you feel when you are crafting. That is, until one of my kids needs the loo or something and I then I’m instantly transported back to reality! 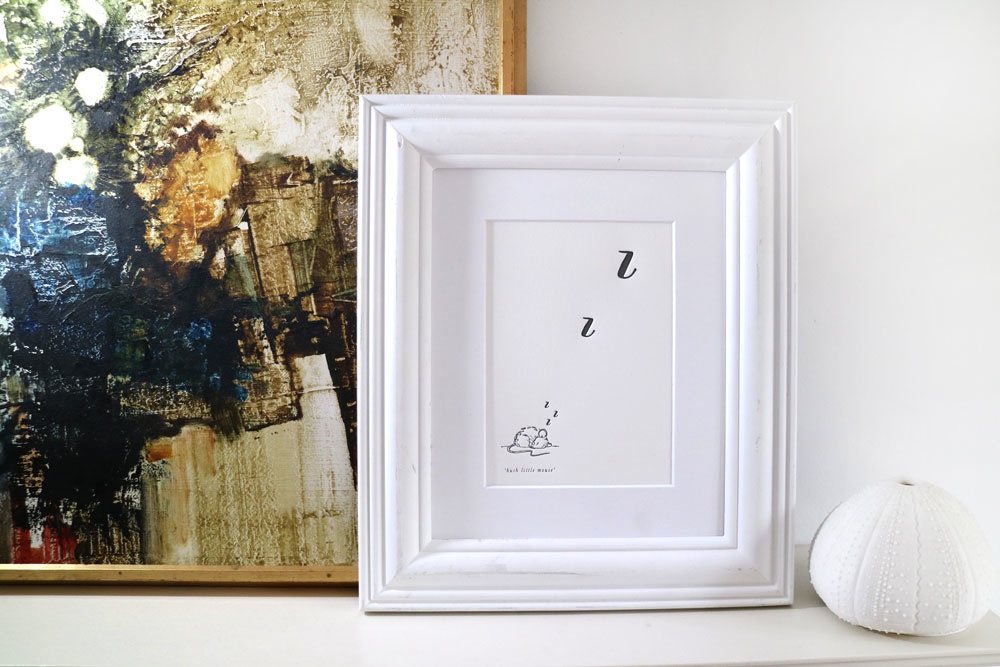 Who are your heroes of craft?
Oh that is a tough question. I see so much talent every day but then some people stand out as they do something phenomenal with it, for example Sophie Standing’s textile art and the embroidery of Chloe Giordano. Specifically on Folksy, I love the detailed mushroom work of Pipistrelle Design and, of course, those supercute Weebogles! 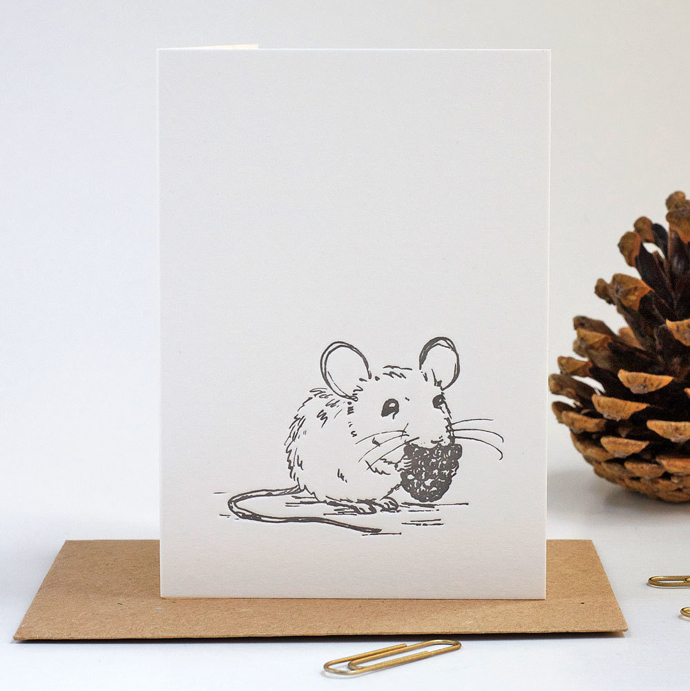 I spent over a year refining the techniques and learning as much as I could before I was ready to produce any products.

Can you tell us something people might not already know about you?
I often get called Ellie and it happens so frequently that I don’t bother correcting anybody. I get some surprised looks from friends of mine when I chat away to someone who has called me Ellie. They think I have some secret identity! Ellie was the name of my first press (naming presses is a printer’s tradition). Oh and I like to print in my slippers ;-) 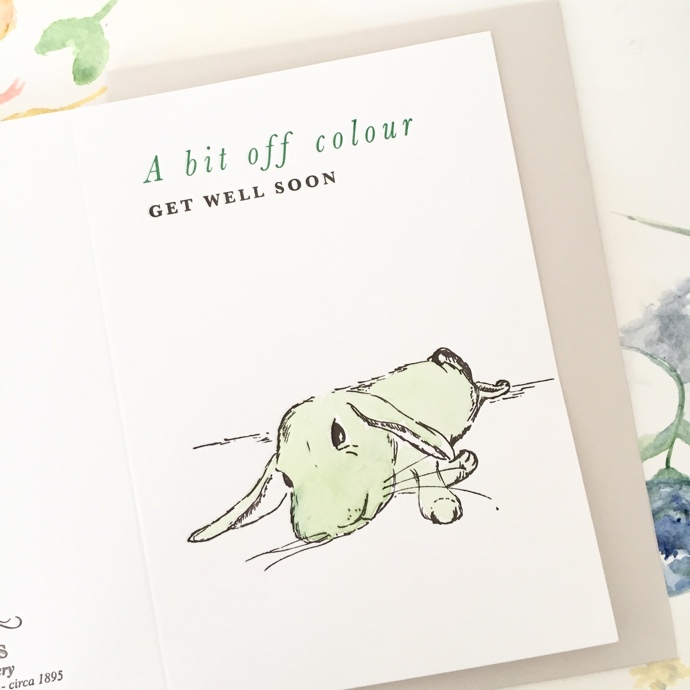 Emma is offering 10% off all her letterpress goodies with the code ILOVEYOU – valid until 18th February.

Win a free weaving class at The London Loom