Popular Posts
Craft Fair Secrets – How to Make a...
How to take product shots on your phone
How to sell more at markets, craft fairs...
Craft Fair Secrets – How much stock do...
How to choose the right social media channel...
Meet Sara Tasker from Me and Orla –...
Meet the maker: The Cornish Coaster Company
Craft fair inspiration – big ideas for small...
The best Instagram hashtags for craft and handmade
How to find your confidence as an artist...
The best Instagram challenges for makers & why...
10 fun gifts for teachers to make with...
Dear George: making jewellery with resin, wood, skill...
Everything you need to know about tax if...
Meet John Bloor – the printmaker carving beautiful...
Home Interviews Meet John Bloor – the printmaker carving beautiful safe havens from anxiety 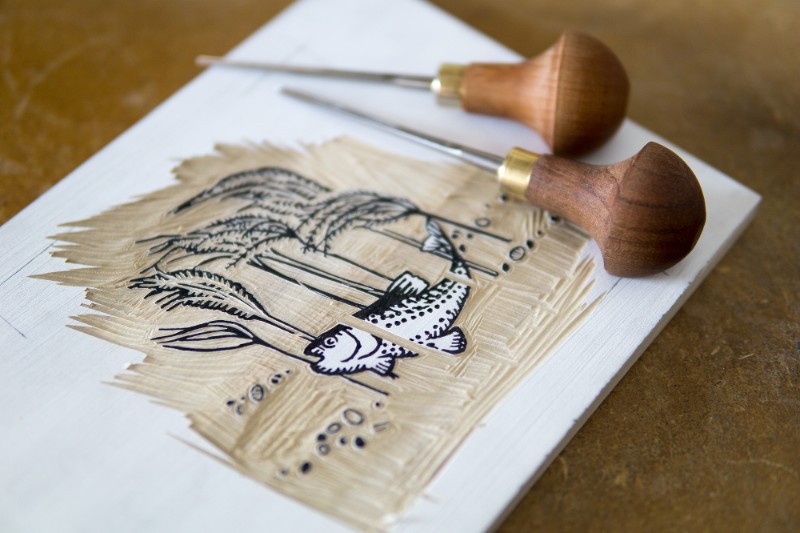 John Bloor is a graphic designer and illustrator who turned his hand to printmaking and in doing so discovered its therapeutic properties and an unexpected ability to still the mind and ease anxiety. By creating printed representations of the oases of safety that he has learned to visualise as a way of dealing with a world that, as a result of Aspergers, can feel chaotic and overwhelming, he has found printmaking can bring calm to his life and hopes his work can do the same for others too. His prints are also mesmerising and beautiful. John talks to fellow artist and Folksy seller Justine Nettleton from 830 Degrees about his artwork and hand-printed homeware, and the positive effect printmaking has had on his well-being…

Get 15% off John Bloor prints and products with the code FOLKSYFEATURED15 from 19th March to 1st April 2018. Click here to shop > 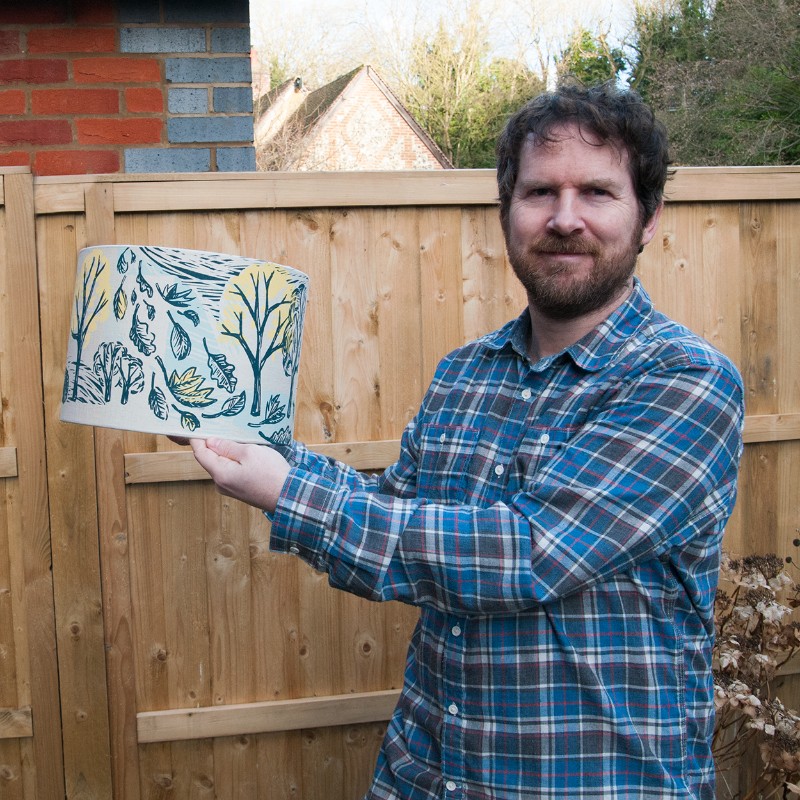 Hi John! What’s your background? What is the journey that led you to this point?
For me, becoming a printmaker on paper and fabric was about the coming together of different disciplines in one Eureka moment. I used to do gig poster artwork for a friend and was inspired very much by other artists who screen printed their gig posters – such as Strawberryluna, Cricket Press and Methane Studios. So I decided to have a go at screen printing a gig poster myself. It went pretty disastrously but I guess it gave me my first taste of printing. But at the time I was working as a freelance graphic designer and illustrator (and still do) and while we were in a homewares shop in Brighton looking at lovely lampshades and cushions, I had a moment of realisation: I could combine screen printing with my graphic design skill and create homewares. 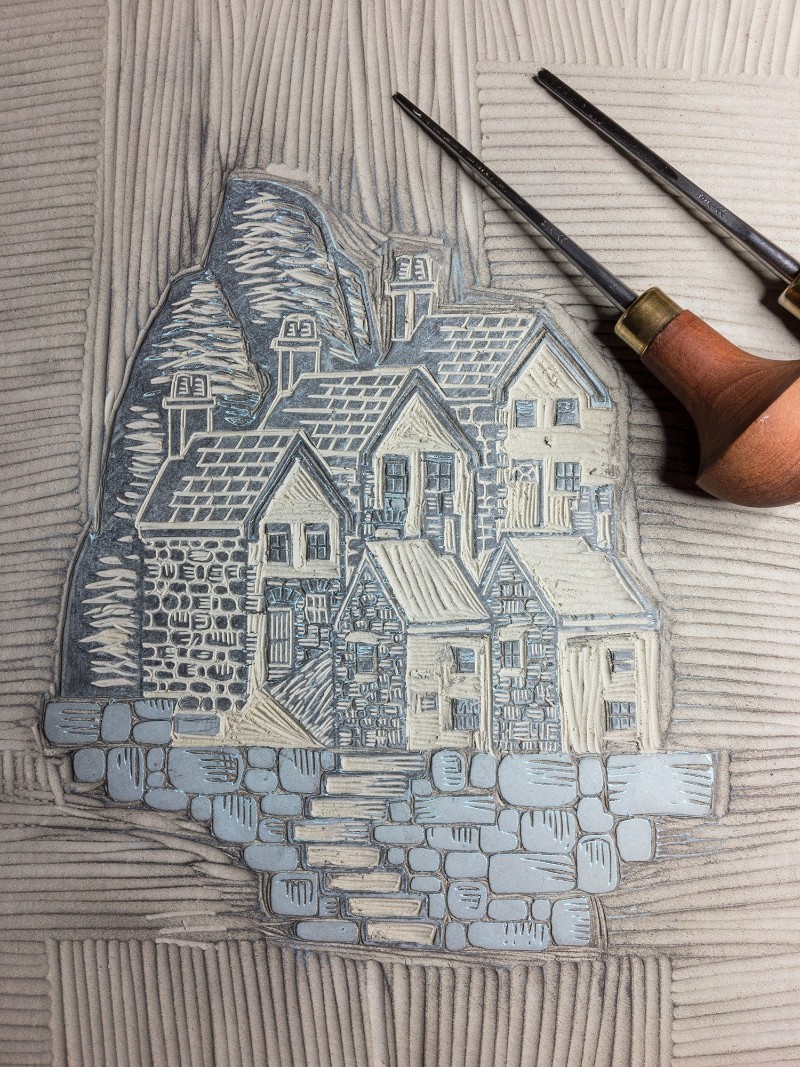 Block printing is extremely therapeutic – cutting the design into lino or wood can occupy the mind brilliantly, making it a great reliever of anxiety.

Once I started printing homewares I became more and more interested in other printmakers such as Angie Lewin, Mark Hearld, Bryan Angus and Jeremy Speck. It was only a matter of time before I had a go at printing on paper again and I did so in earnest, first of all with block printing and then finally screen printing again. I’m happy to say that the results were much better and have inspired me to keep going. 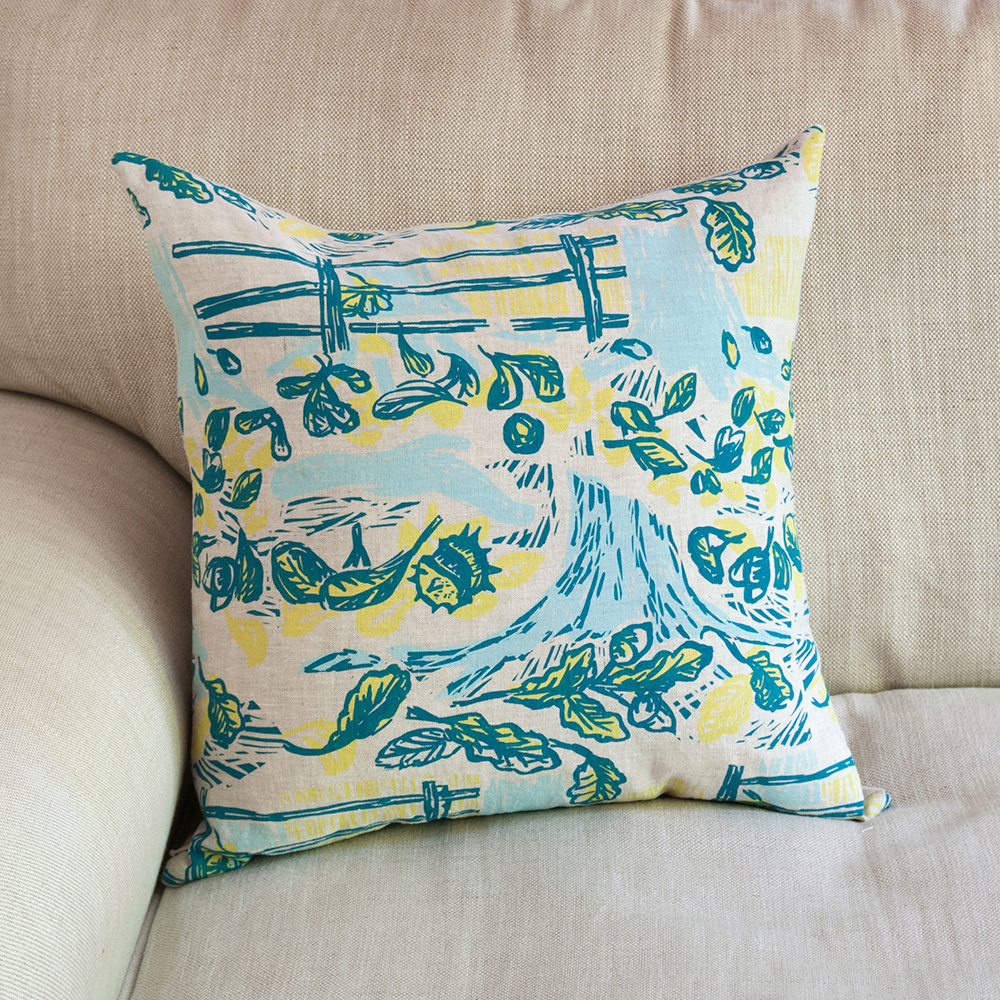 Dirty colours are also a great thing. I suppose you could say my colour palette has originated in nature but I’ve augmented it with these bright, dirty colours which give me something that works.

Nature features across your ranges, is there any specific area or landscape that inspires your work?
Yes, I am very inspired by nature but I think you could say all we have around here in Hampshire is rural farmland cut through with the beauty of the River Test, so it’s hardly surprising that the river is one of my inspirations. 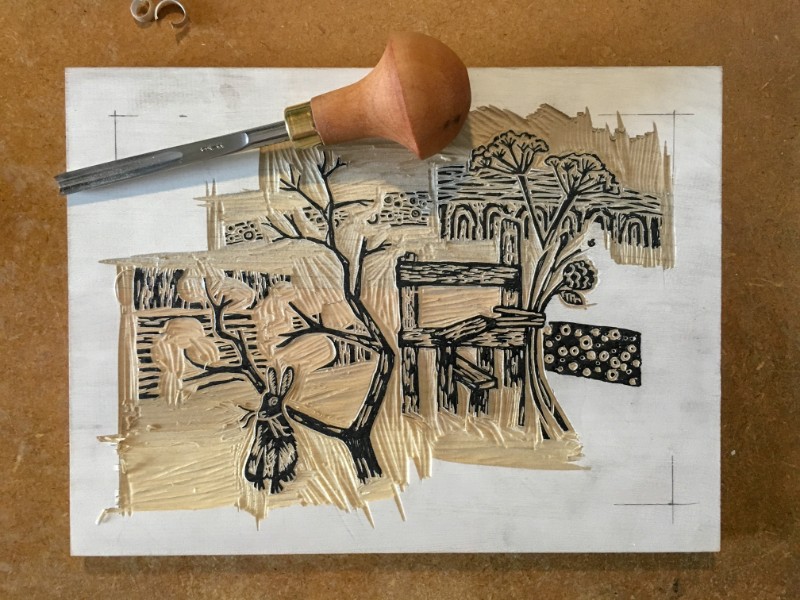 The other major influence on my work is the coast, specifically Cornwall, where we have holidayed for what seems like our entire lives. I’m interested in finding new ways to combine the textures, patterns and layers which I feel a place evokes. It’s all about capturing the feeling of a place. 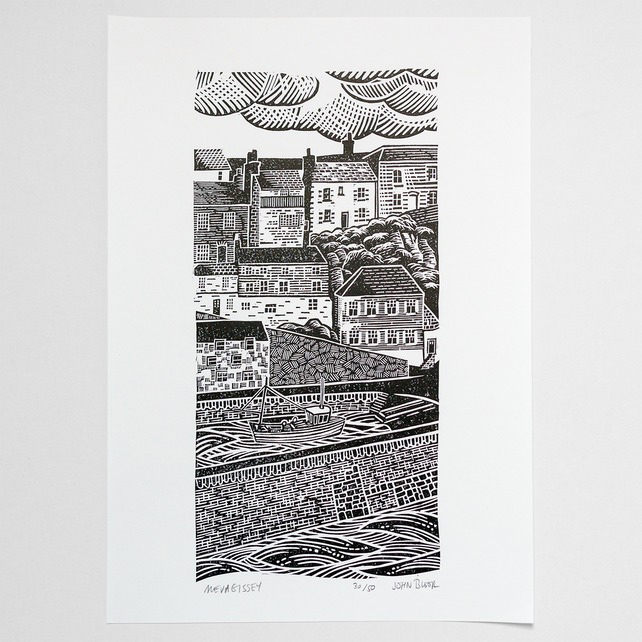 A major influence on my work is the coast, specifically Cornwall, where we have holidayed for what seems like our entire lives.

I have long been inspired by places that are special to me. Places which are off the beaten track or which instil the feeling of having discovered somewhere secret. I’m sure everyone has these places. For me, some of them are from childhood, hidden places to play. Some are local, such as islands on the river, across the sluice gates. Some are in familiar places, like Cornwall – well-hidden coves and secret paths to stone piles and ruined tin mines. And some places exist only in the imagination.

I’m sure everyone has their own reason to visit their own secret places. For me, pursued constantly by anxiety as a result of Aspergers, I like to visualise places of safety. My own oases of calm in an otherwise chaotic and overwhelming world. I began to realise recently that I could create, in print form, representations of these special, secret and safe places in a way which might bring some calm to my life and even perhaps others. 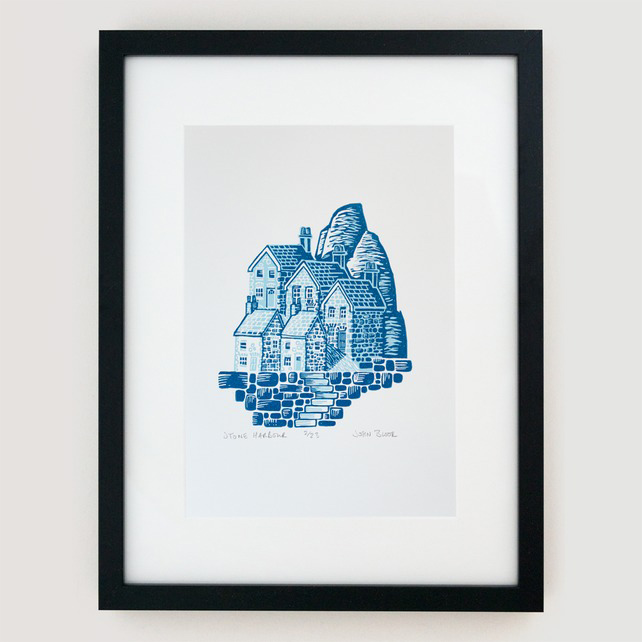 What’s your process for the original image?
I always start by sketching in my book and at some point move on to the computer to develop the ideas into something more finished. I have a lot of anxiety and find that working digitally is just something I need to do at the moment to help with that. I’d love to be able to work in natural media and take that directly to print but I just don’t trust myself. So, I tend to draw using my Wacom tablet in a style I call digital linocut. It allows me to closely mimic real linocut and get a finished design that I’m happy with. The irony is that I then have to transfer that design to lino and cut it for real – which allows me a chance to reinterpret the design and cut it properly. 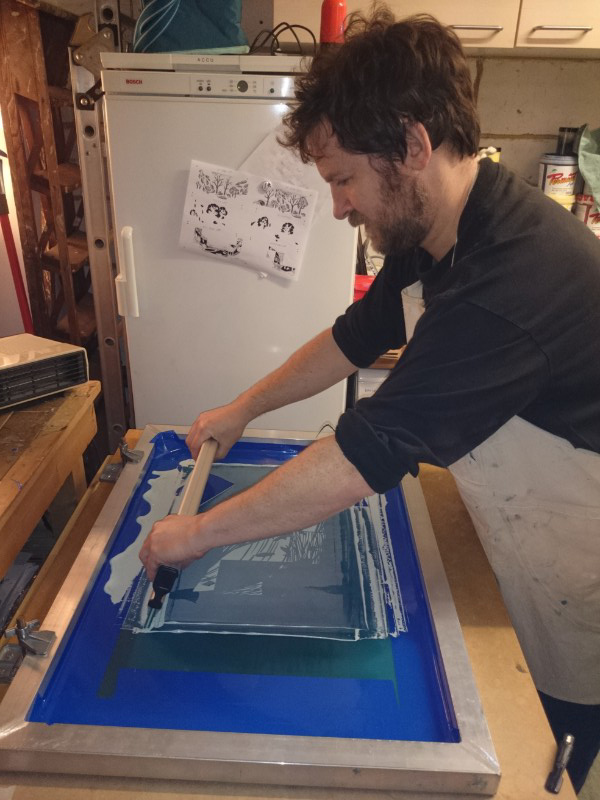 When I’m screen printing I still enjoy employing my digital linocut style but I have also played around a lot with natural brush strokes. I hope that I will employ more natural media in my future work. 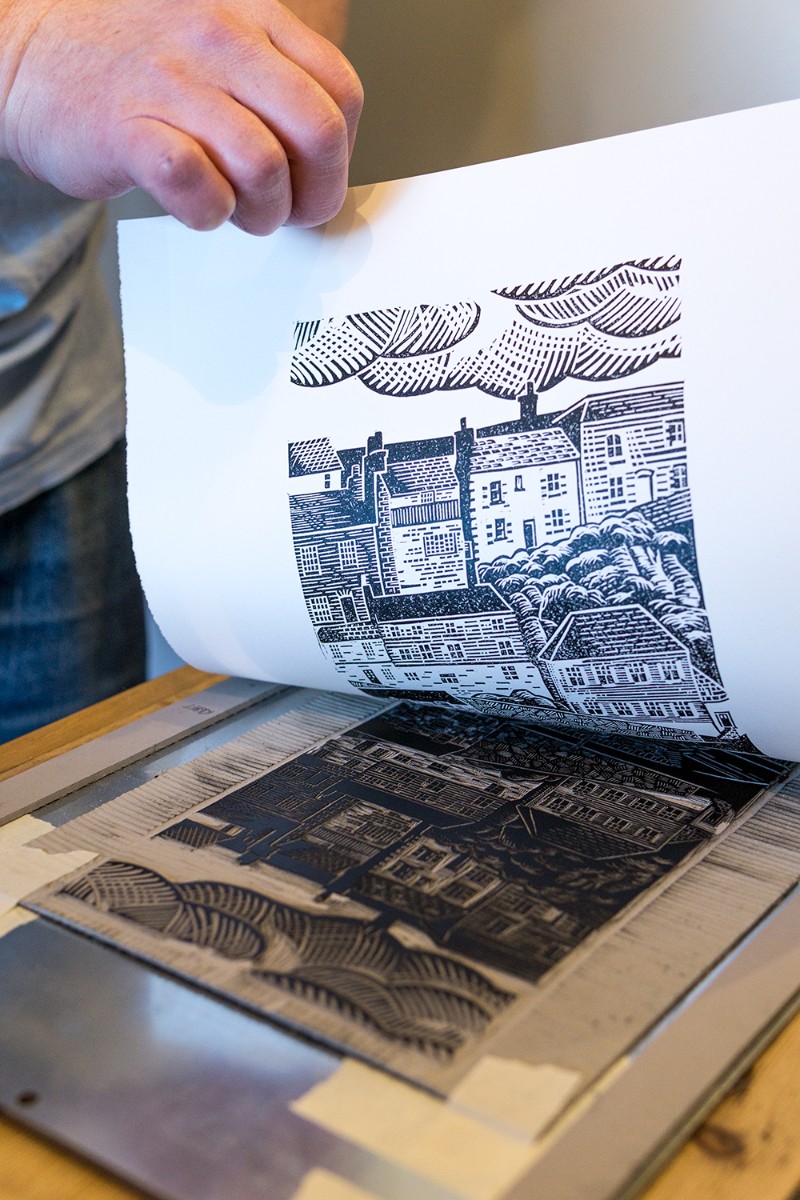 It’s all about capturing the feeling of a place.

I’m interested by your choice of palette which I think links across all of your ranges. How did you arrive at these choices?
This is probably the hardest question you’ve asked! Yes, I have developed some colour palettes I like using but I think I arrived at these colour palettes by experimentation. I have tended towards combining muted colours with one that pops more. So dark blues or greens with pink or dirty yellow. Dirty colours are also a great thing. I suppose you could say my colour palette has originated in nature but I’ve augmented it with these bright, dirty colours which give me something that works. 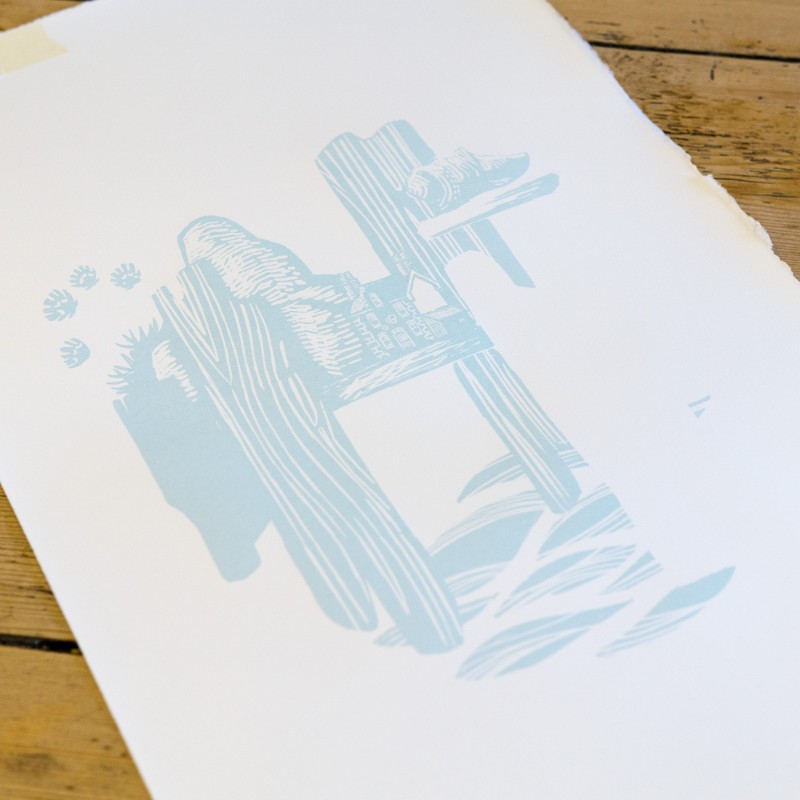 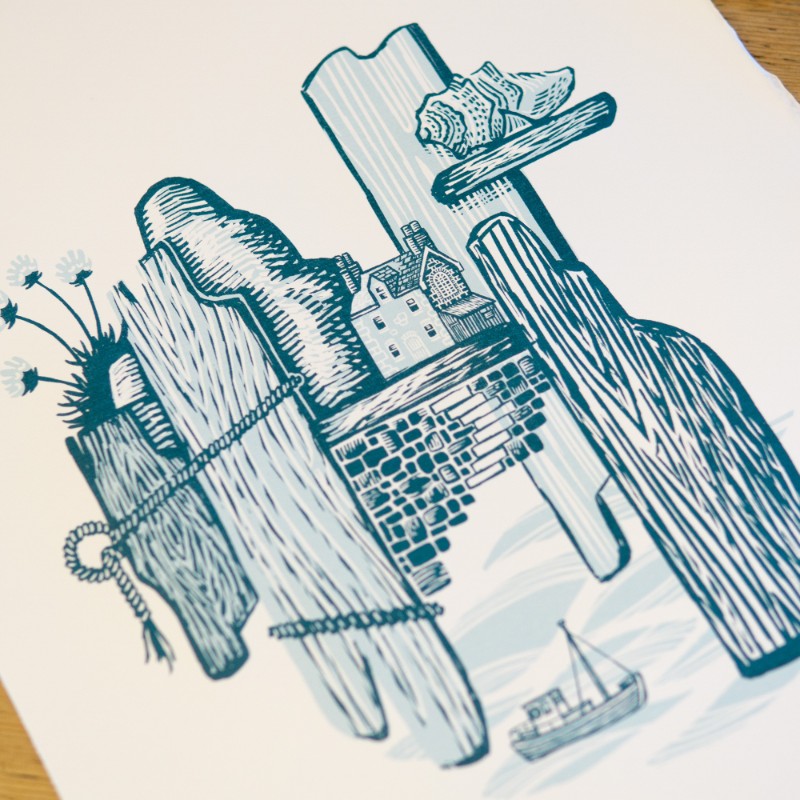 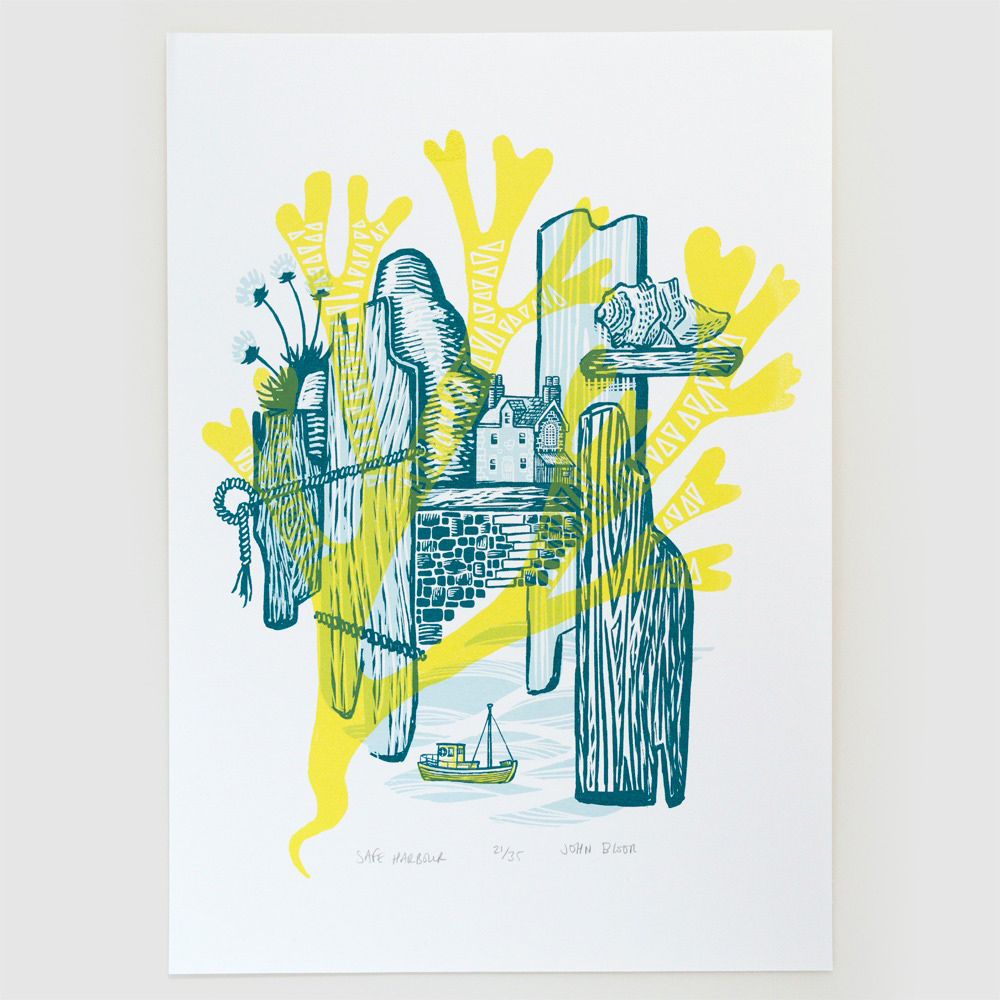 My favourite piece so far is ‘Safe Harbour’ which brings together many things for me: the fantasy element as a tied-together bundle of objects, exploration of mark making digitally and overprinting transparent colours to bring an added depth to the piece.

Which is your personal favourite piece?
I think, despite my love of the process of lino cutting, my favourite piece so far is ‘Safe Harbour’ which is a screen print. It brings together many things for me: the fantasy element as a tied-together bundle of objects, exploration of mark making digitally and overprinting transparent colours to bring an added depth to the piece. It works for me on many levels and I’m really happy with it. 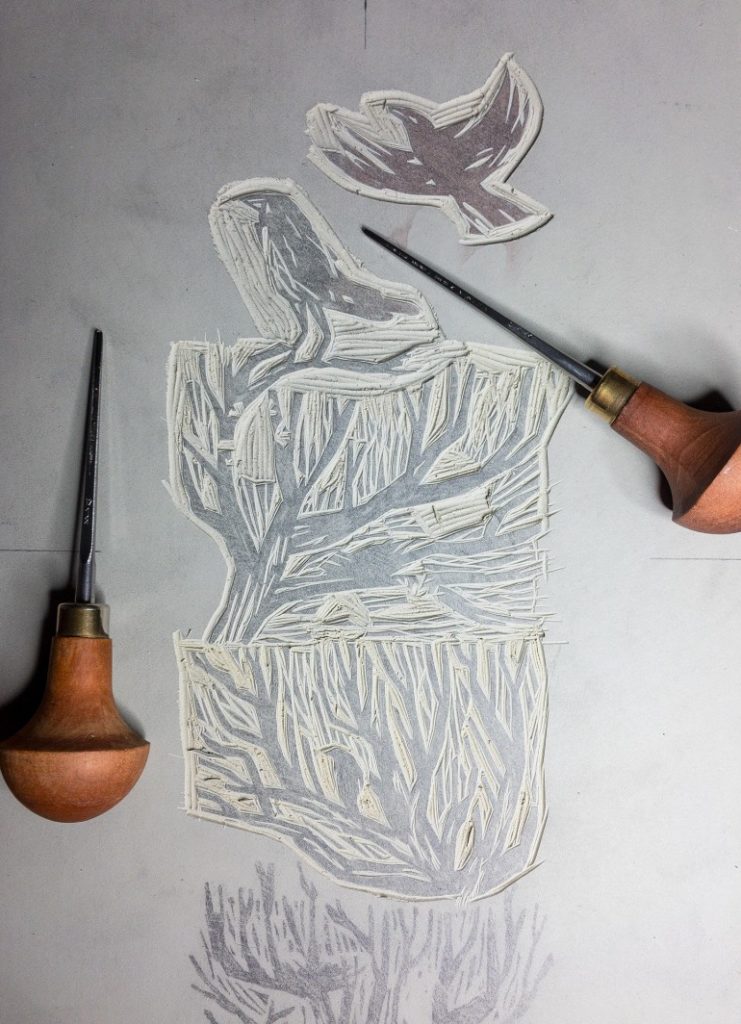 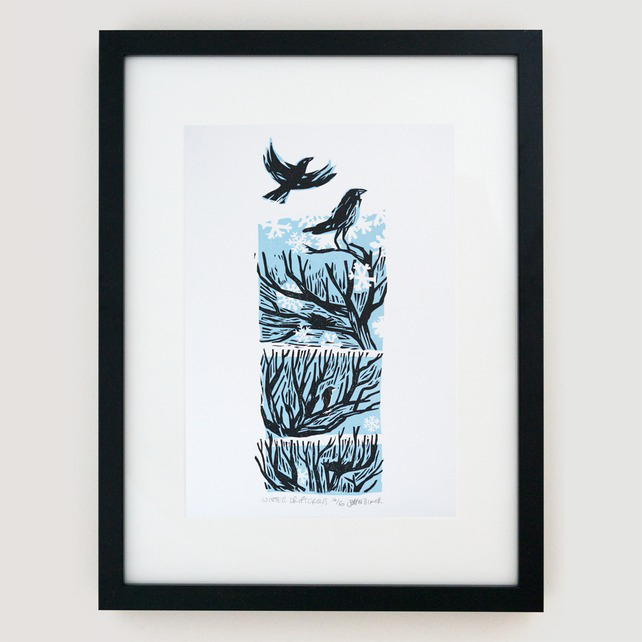 Which part of the process brings you the most pleasure?
They all bring pleasure for different reasons. Sketching and developing ideas can be so rewarding – when something starts to come to life, I find I can barely hold myself together with excitement. Then, of course, for block printing there’s the extremely therapeutic cutting of the design into lino or wood, which can occupy the mind brilliantly, making it a great reliever of anxiety. 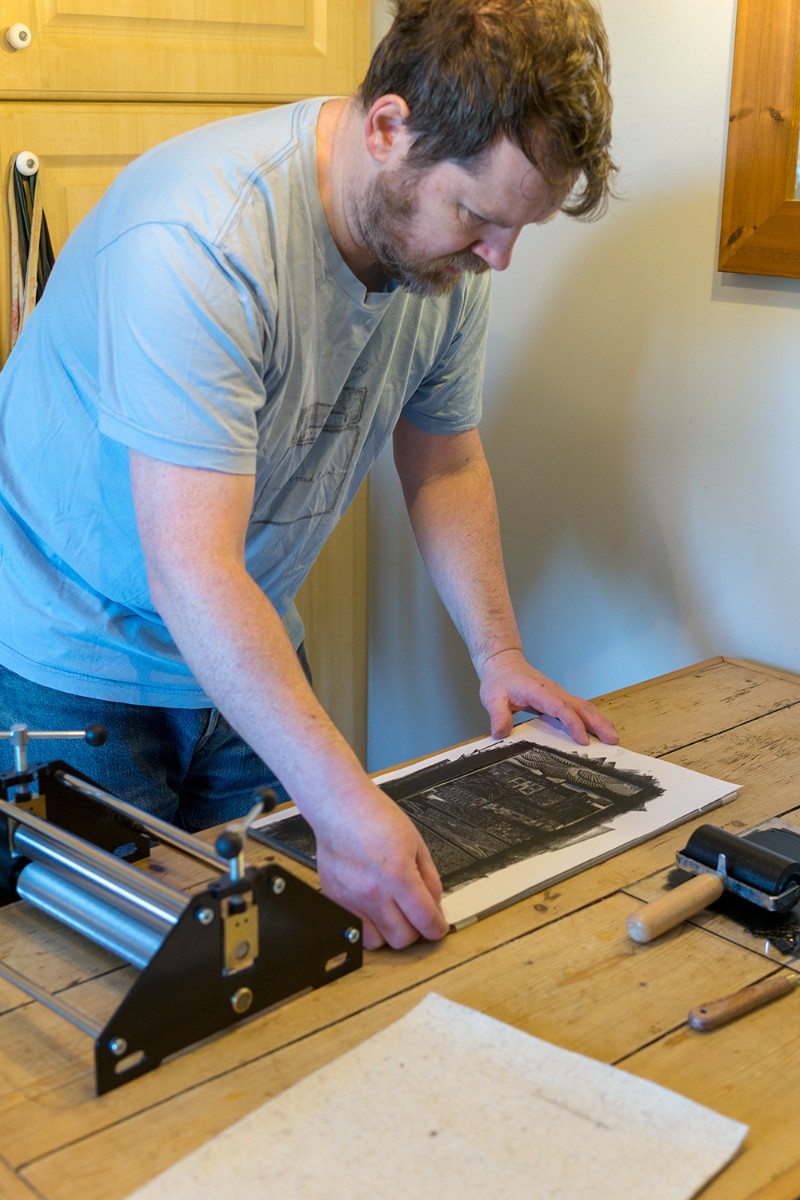 The printing itself – when the idea finally resolves itself on to paper or fabric – can be terribly nerve wracking but it mostly doesn’t go wrong and when it all goes right, and you have something tangible to hold, you feel a sense of achievement. As someone who has anxiety on a daily basis, I should add that I have to fight for these feelings of pleasure and achievement but it’s well worth fighting for. 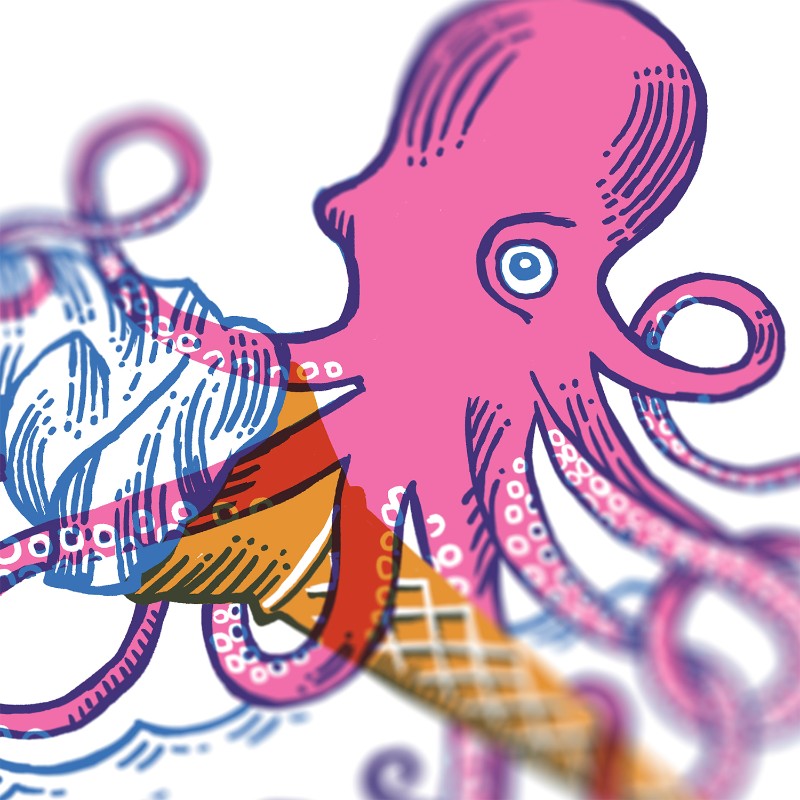 Do you have any work in progress you’re excited about and want to share with us?
I’m excited to be developing new ideas for my ‘Safe Harbours’ series – a series that I have deliberately left open ended and could, conceivably, continue working on for the rest of my life. I have had so many ideas here that it’s been a case of paring down to the ones I really want to print. So, next, I have a bit of surrealism with an octopus and an ice cream, a house balancing on pebbles that are stuck between driftwood and, one of my favourites, a simple driftwood experiment in overprinting. 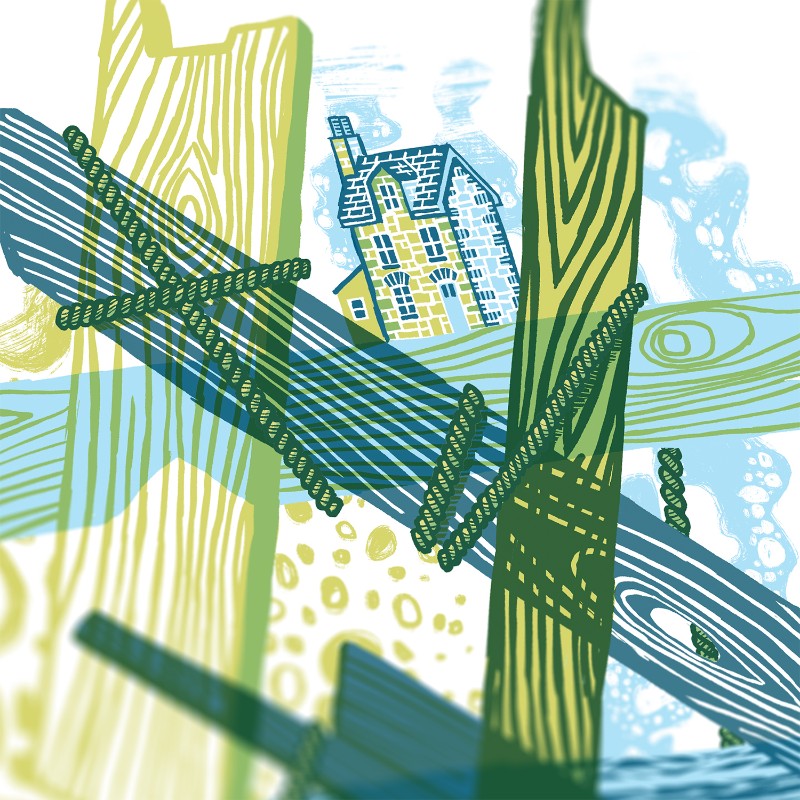 I’m excited to be developing new ideas for my ‘Safe Harbours’ series – a series that I have deliberately left open ended and could, conceivably, continue working on for the rest of my life.

I’m going to invest a lot more time in where this series is going, with the magical, safe places of safe harbours as I don’t really know myself yet where it’s headed! 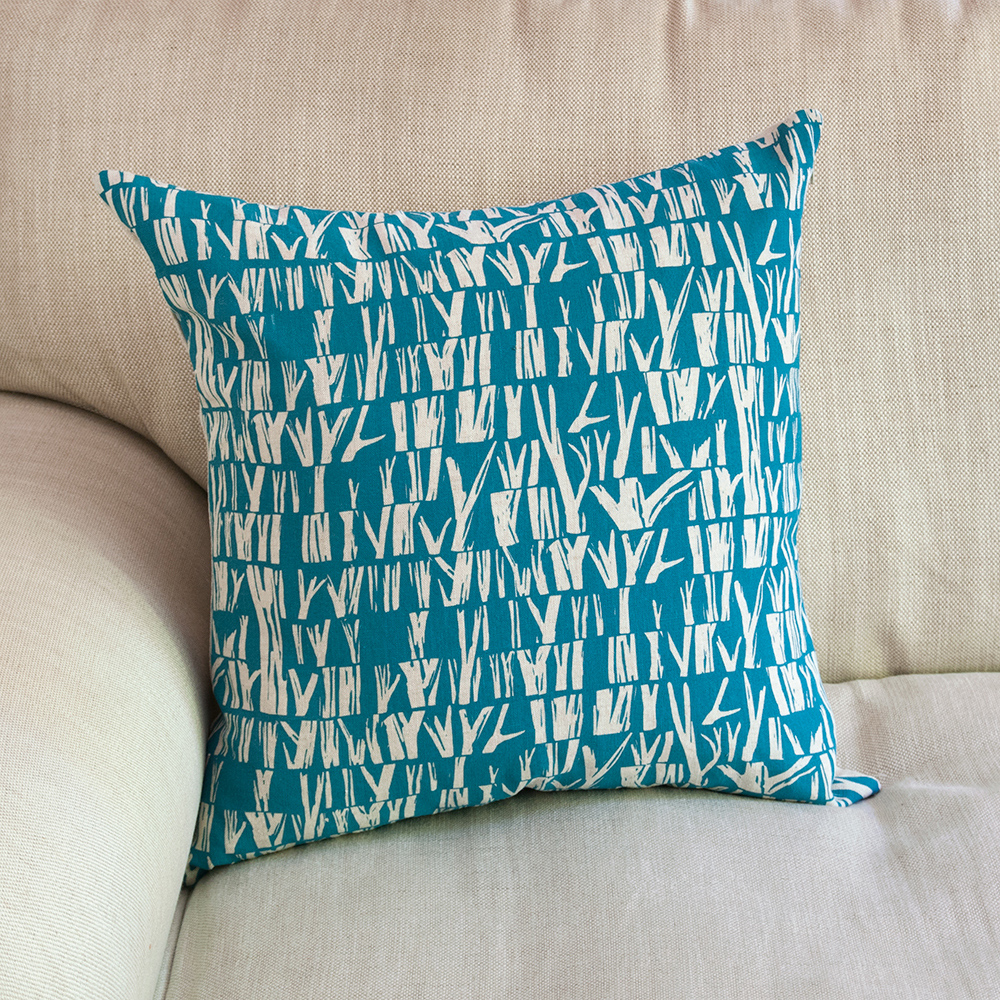 Do you decorate your own home with your designs and work of other artists?
Absolutely. My wife and I are now as obsessed with prints as we are with ceramics! We have been lucky enough to collect a few ceramics by Lisa Hammond, Juliet Macleod and RAMP Ceramics and now prints by Angie Lewin, Jeremy Speck, Daniel Danger, The Bird Machine (Jay Ryan) and of course Strawberryluna, plus many more. I think it’s fair to say that makers tend to be avid collectors as well! 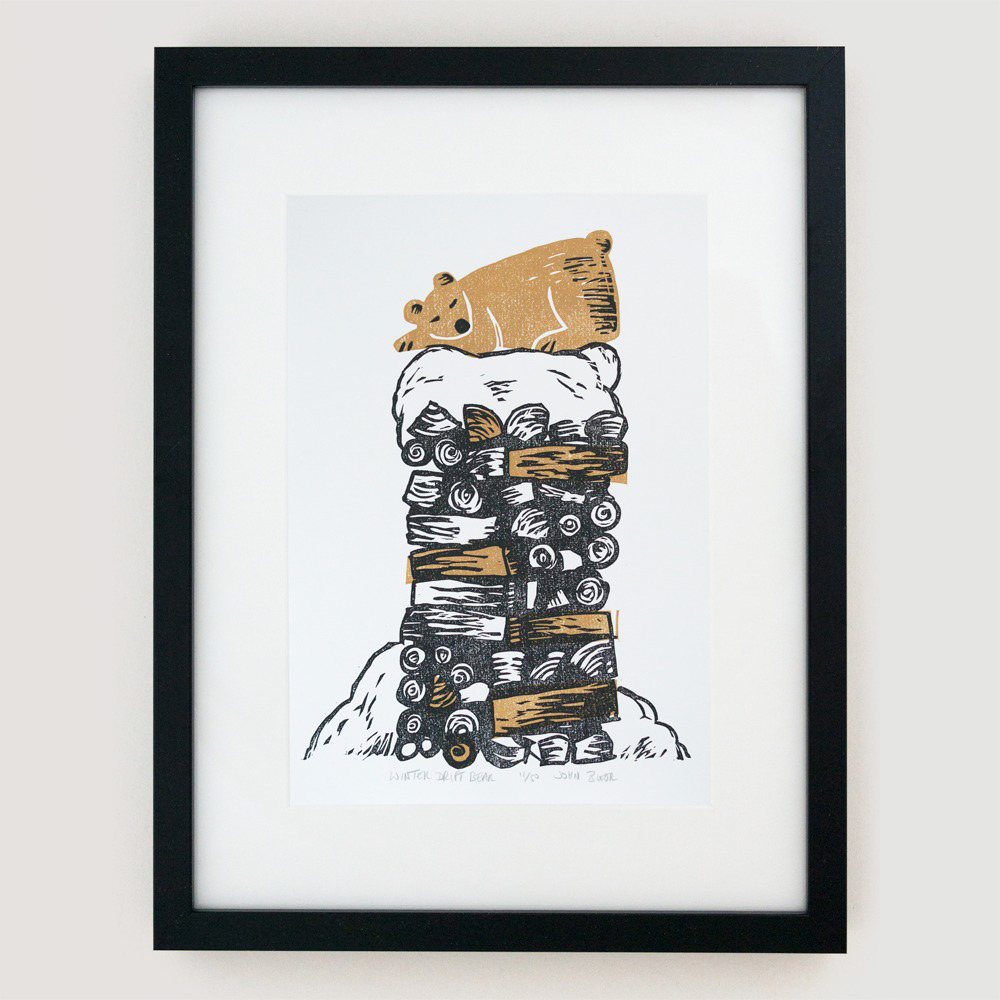 Get 15% off John Bloor prints and products with the code FOLKSYFEATURED15 from 19th March to 1st April 2018. Click here to shop > 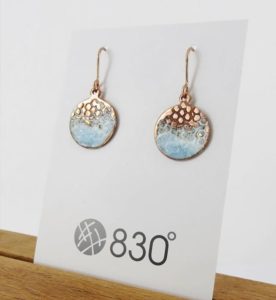 The maker asking the questions this time is Justine Nettleton from 830 Degrees, who creates enamel jewellery from her home and studio in Nottingham. You can read our interview with Justine here >

Meet the Maker – Just to Say…

Meet the Maker – Woofs and Wool