Popular Posts
Buy Less, Buy Better, Buy Handmade
Craft Fair Secrets – How to Make a...
How to take product shots on your phone
How to sell more at markets, craft fairs...
Craft Fair Secrets – How much stock do...
How to choose the right social media channel...
Meet the maker: The Cornish Coaster Company
Craft fair inspiration – big ideas for small...
Meet Sara Tasker from Me and Orla –...
The best Instagram hashtags for craft and handmade
How to find your confidence as an artist...
10 fun gifts for teachers to make with...
The best Instagram challenges for makers & why...
Craft Fair Secrets: Not sold much? Here’s why...
Everything you need to know about tax if...
Meet John Bloor – the printmaker carving beautiful...
Home Craft Stories Have You Heard Of…? Introducing a new series by Trudi Murray 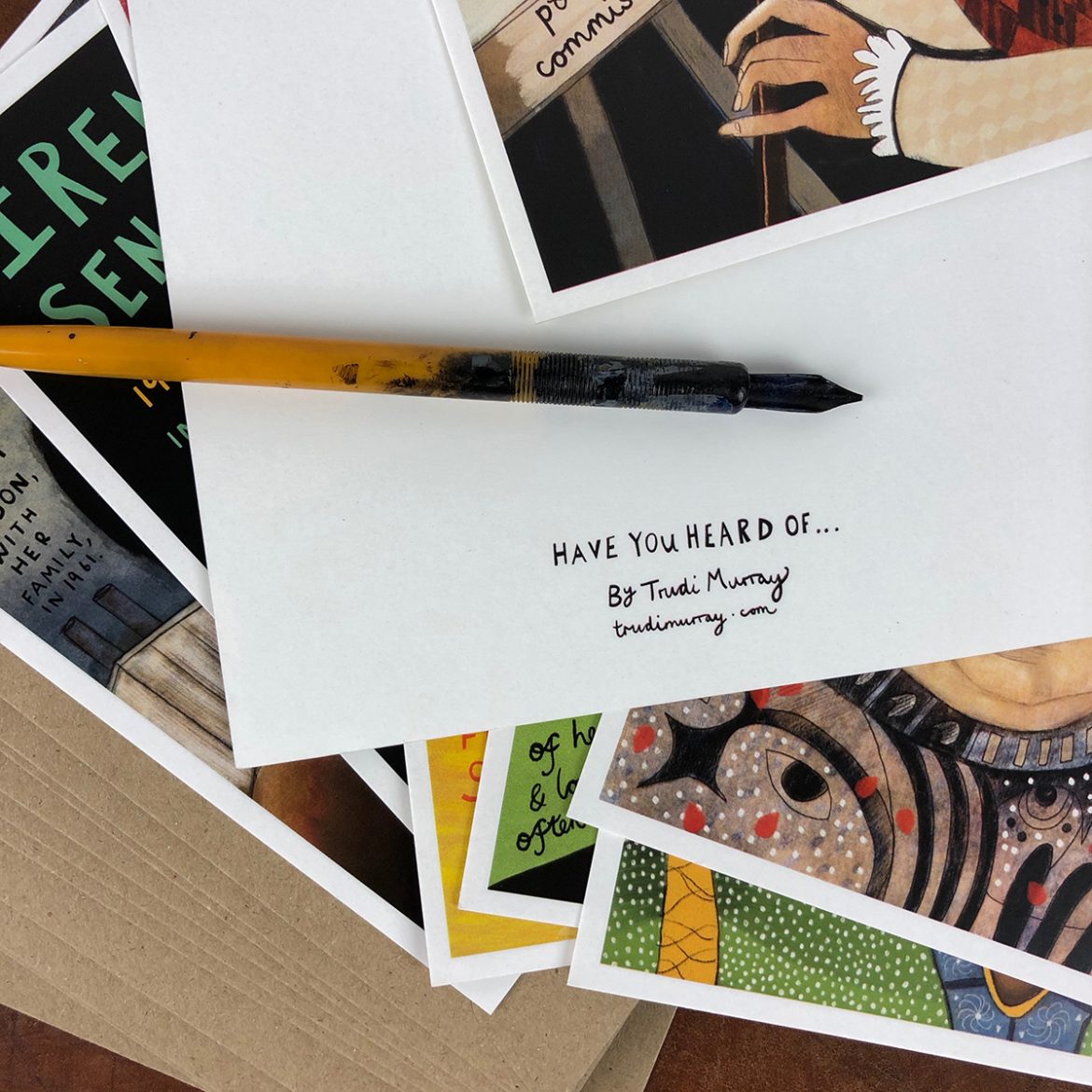 Have You Heard Of…? Introducing a new series by Trudi Murray

Introducing our new ‘Have You Heard Of…?’ series by Trudi Murray

There are so many humans out there doing interesting and thoughtful things who we don’t hear very much about. In her new illustration project, Folksy artist Trudi Murray hopes to help rectify that by exploring the life stories of female artists, rebels, scientists and activists from history who you might not have come across before. To accompany her illustrated series, we’re delighted that Trudi will be highlighting one inspiring woman from history each week here on the Folksy blog.

You can buy postcards from Trudi’s series here >

To kick off the series, we asked Trudi to introduce herself and her project…

“I’m a quiet sort of person. Give me a book and a biscuit over a crowded party, any day. Or a walk in the park with a friend, exchanging notes on real life and swapping stories. Stories are what I love, and I’ve discovered that we can learn so much from just hearing other people’s tales of hard work, talent and grit – the inspiration of hurdles overcome and dreams realised. My new project, Have You Heard Of..? sets out to find and illustrate lives of people who we might never heard of before: artists, rebels, scientists, activists. There are so many people out there we could learn about! “

Have you Heard Of…
Kenojuak Ashevak – An Instinctive Artist

Kenojuak Ashevak was born in an Inuit camp, into the traditional Arctic way of life, in Baffin island, Canada, in 1927.

Kenojuak’s family hunted and followed the seasons, as was the way of things for her nomadic community. As a young woman, Kenojuak learned craft techniques and beadwork. A local government administrator, James Houston, had the idea that the instinctively artistic Inuit could develop an income stream from the sale of prints of their original artwork.

Kenojuak was persuaded to have a go at drawing on paper. The results were stunning. Kenojuak, with a gentle and quietly confident eye, produced highly stylised, colourful and bold drawings of her environment and the Arctic birds and animals that surrounded her. Her imagination and playfulness were all there in her drawings too. James opened up a print workshop, which transferred her drawings, and others, on to stone blocks to produce prints to sell. His hunch had been correct. The beautiful prints, sold to the South, were an instant success.

Kenojuak’s work soon grew in fame and renown. She seemed to have an instinctive sense of form and a confidence of line that artists the world over would envy. She didn’t use an eraser; her pictures took shape in her imagination and she simply put them on the paper. Her drawings were made into Canadian stamps and coins and Kenojuak won many awards for her work.

From a quiet life of nomadic tradition to a calendar of travel and awards! Have you ever heard of such a change?! I don’t know what Kenojuak Ashevak thought of it all, but from my research she seemed to be a very level, measured and confident person. I expect she took it all in her stride, with the same grace and ease with which she, happily for us, took wonderful pictures out of her mind, and put them into the world.

Read the whole Have you Heard of series here >

For sources, and further reading, see Trudi’s website at www.trudimurray.com

Trudi Murray is an artist, illustrator and writer, working in a pretty art studio in Richmond, London, with a lovely view of the treetops and people passing by on the street below. Her paintings hang in schools, churches, libraries, and the homes of an ever growing number of private clients. She's illustrated magazine and book covers, and worked in editorial illustrating too. Her biggest ambition is to write and illustrate books for children.

Announcing the Folksy Christmas Market – in association with Pedddle

Cece and Bloom, a New Shop Full of...