Popular Posts
Craft Fair Secrets – How to Make a...
How to take product shots on your phone
How to sell more at markets, craft fairs...
Craft Fair Secrets – How much stock do...
How to choose the right social media channel...
Meet Sara Tasker from Me and Orla –...
Meet the maker: The Cornish Coaster Company
Craft fair inspiration – big ideas for small...
The best Instagram hashtags for craft and handmade
How to find your confidence as an artist...
The best Instagram challenges for makers & why...
10 fun gifts for teachers to make with...
Dear George: making jewellery with resin, wood, skill...
Everything you need to know about tax if...
Meet John Bloor – the printmaker carving beautiful...
Home Craft and Wellbeing Meet the Maker – Woofs and Wool 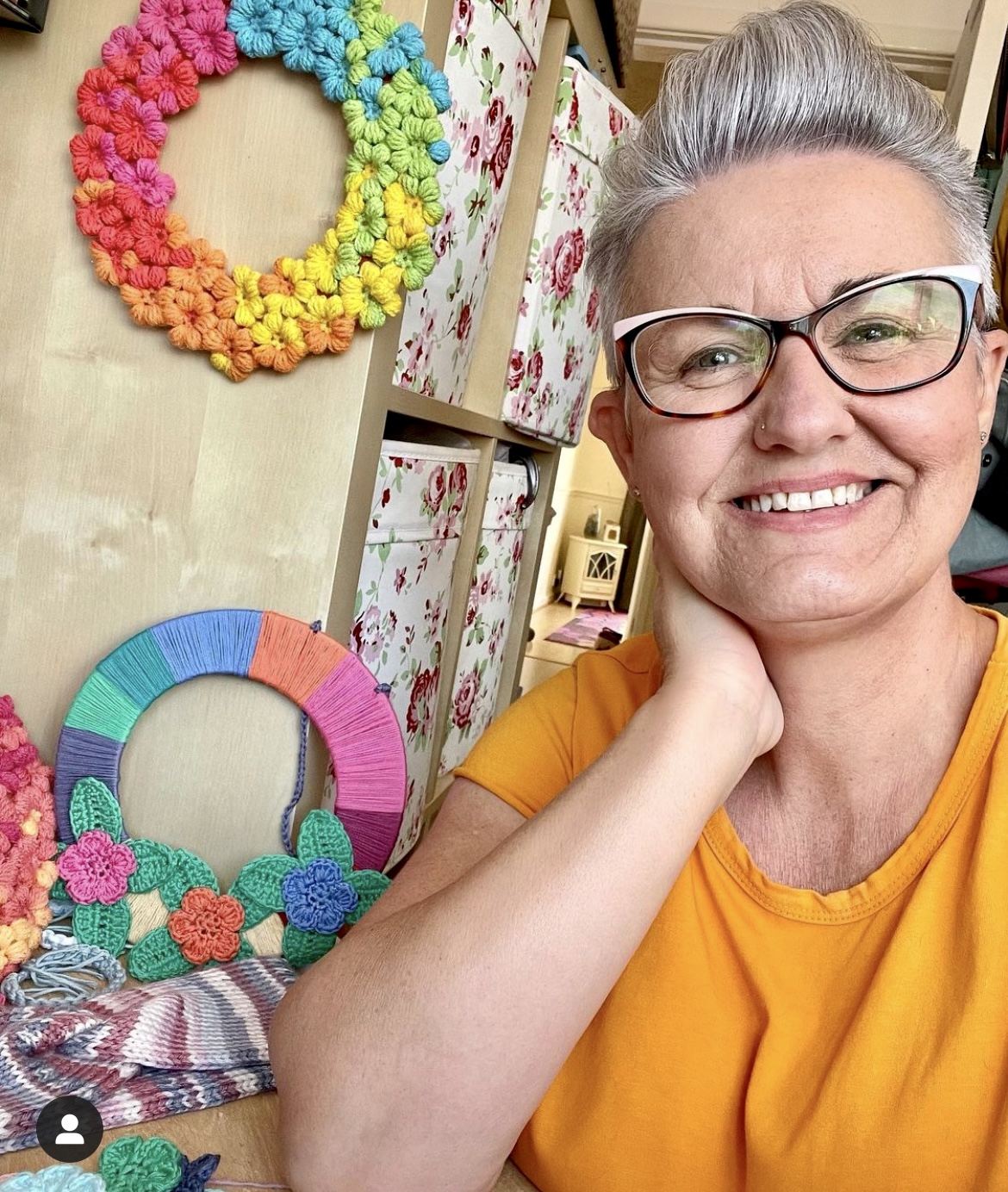 Craft and WellbeingInterviewsMeet the Maker

Meet the Maker – Woofs and Wool

Meet Angela from Woofs and Wool

Angela from Woofs and Wool is a self-confessed ‘yarnaholic’ who makes colourful creations for you, your home and your hound! It was during a period of depression in the mid-2000s that Angela discovered the therapeutic benefits of craft and how the process of making helped focus her mind and control negative thoughts. Here Angela talks honestly to fellow Folksy seller and Folksy Local captain Sarah from Sister Sister about craft as therapy, her gorgeous dogs and why brighter is always better!

When I pick up a squishy, colourful ball of yarn my mood really does lift immediately… and the creative juices start to flow.

Hello Sarah and hello everyone! I’m really excited to be given this opportunity to introduce myself and my colourful woolly world on Folksy. So here goes …

I live with my hubby in Lancashire, about half way between Manchester and Liverpool, near lots of fields and a great canal network where you can find me most days walking my beloved dogs.

My shop name really gives you a perfect indication of how I roll. I’m a self confessed dog and yarnaholic. There are actually some similarities between them: they are both soft, cuddly and have infinite varieties of texture and colour. It seemed natural to name my shop Woofs and Wool, after my two obsessions.

There are actually some similarities between dogs and yarn: they are both soft, cuddly and have infinite varieties of texture and colour. It seemed natural to name my shop Woofs and Wool, after my two obsessions.

Your whippets, Sky and Stan, are gorgeous. Whippets are one of my favourite breeds of dog. Can you tell me more about them?

Oooh I could talk about my doggies all day long – you might regret asking!

Whippets are just such an easy breed to care for (all the sighthounds are). They are gentle souls and require very little exercise. They are quite content snoozing the day away – that’s why they’re known as 40mph couch potatoes.

Did you know that back in the old days whippets were thought to be used as hot water bottles? I can believe it. Sky and Stan LOVE being toasty and warm in bed (usually mine, under the duvet).

So let’s start with my dogs in order:

Firstly I’d like to mention our Chip. We lost him a few months ago, aged 15. He had a fabulous life full of love and family adventures. He kept me company on the couch while I was knitting and somehow always managed to get tangled in the yarn. He will always hold an extra special place in my heart, as he was our first family dog.

SKY – is my beautiful, fawn brindle and white senior lady, who is now aged 15. We’ve had her since she was a puppy of five months. She was originally bred to be a show dog but failed in this respect due to her sticky-up, radar ears and a “whirlpool” in her fur, so was offered for sale as a family pet, which is where we stepped in. She’s such a sweet girl who loves everyone she meets. She sadly now has dementia, which means we have a few ‘accidents’ in the house – thank goodness for laminate flooring! But she’s still going for walkies and follows me around constantly.

STAN – is my handsome black boy aged eight. He came to us in 2016 as an emergency foster from Just Whippet Rescue. He was supposed to be with us for two weeks but soon won us over and he’s here to stay. Stan sadly went completely blind over 48 hours in the first lockdown with a rare condition called SARDS, but he’s adapted so well and this doesn’t stop him zooming up and down the stairs and going for walkies – though I do have to guide him around street obstacles. Stan is a very affectionate boy who loves to put his paws up on my shoulders and rub his face against mine.

I can’t understand why the black dogs are always the last to get adopted in rescue? They have lovely glossy coats, look fab in any colour and have just as much love to give.

The process of creating focused my mind and helped to control the negative thoughts. In short it became my therapy.

I’d love to know more about how you got to where you are today. Can you tell me your backstory?

For most of my life I couldn’t even sew a button on! No, honestly it’s true. It was a standing family joke between me and my mum, who has been a very talented sewer all her life, making her own clothes as a teenager and my bridemaids’ dresses. Then in the mid 2000s things changed.

I was diagnosed with depression. I had to take time off from my stressful job as a podiatrist in the NHS but out of this very dark period I found my love of craft. I didn’t realise it at the time but the process of creating focused my mind and helped to control the negative thoughts. In short it became my therapy.

I started making simple jewellery, then moved on to sewing. Much to my mum’s amazement I bought a basic sewing machine and started making tote bags. Finally I could sew a button on! Next came paper crafts, stamping, stencilling and decoupage. Eventually I discovered a special love for scrapbooking, which allowed me to create beautiful vintage-style pages for my family tree heritage album.

Then one day I walked into my parents’ house to find my mum knitting, something I hadn’t seen her do for years. My sister had announced she was expecting and mum was in full baby mode! I really wanted to get involved too and so I picked up some needles and, with a little guidance, produced my first baby cardigan. After a while, feeling ready for a new challenge, I taught myself to crochet and I was hooked. This is when the yarn obsession really began, especially when I found I had a rather large yarn shop only five minutes down the road! At this point I announced to hubby that I needed space in the spare room for my yarn stash and other paraphernalia. Surprisingly he agreed.

So now you’ll find my shop stocked full of bright colourful woolly creations for you, your home and your hound!

What or who is the inspiration behind your work?

Colour, definitely. The brighter the better, and the more colours I can incorporate into a project the better too!

When I pick up that squishy colourful ball of yarn my mood really does lift immediately and the creative juices start to flow. However, colour doesn’t dictate what I make. I think my mood does that. Because of my poor concentration and brain fog I mostly choose small projects – things that I can complete in a short space of time, simple patterns that I can do easily in front of the telly without having to think too much. Basically I let the colour do all the talking!

I’ll be honest… I don’t even think of myself as a business – I’m just an ordinary crafter, a maker of colourful yarny things in my spare time, who happens to sell some her creations. Being part of Folksy has made me realise that I’m not alone.

We all know that Folksy has such a wonderful community. As a co-captain for Folksy Local North West, can you tell me more about Folksy Local and why being part of the community is important to you?

I’ll be honest, I was completely shocked when Folksy approached me to be a co-captain for their new Folksy Local venture. Somehow, I didn’t feel worthy. There are so many talented folk on Folksy and I suppose I don’t really consider myself an artist in any shape or form. I create what I like, when I like and that’s it. I don’t even think of myself as a business – I’m just an ordinary crafter, a maker of colourful yarny things in my spare time, who happens to sell some her creations.

Being part of Folksy has made me realise that I’m not alone. There are other ordinary people like me out there. We may all come from different creative backgrounds but we are all doing what we love. Finding and connecting with like-minded people who live in my local area has actually really boosted my confidence. It has helped me feel less isolated as a crafter and I’ve gained much advice and made many new friends.

A little bird told me that craft has inspired some body art. We need to know more!

Ooh that’s a cheeky little bird you’ve been talking too, but yes it’s true. I have two tattoos.

My first one was a complicated affair that took ages to complete and perhaps, looking back, I should have gone for something much simpler for my first tattoo, but I was really keen to get some art that reflected as many of the crafts I had tried over the years as possible. It’s on my lower right leg and is a large ball of yarn (obvs!) surrounded by a crochet hook, buttons, a cotton reel, and a needle and thread, with the word ‘crafty’ written underneath.

My second tat was a much simpler idea. This one is on the back of my neck and comprises of a small ball of yarn with a single thread cascading down simply writing the word ‘yarn’.

Your makes are so vibrant and playful. What is your favourite thing to make and why?

I can honestly say I really don’t have a favourite make. I truly enjoy everything I create at the time I’m doing it, from small crochet puff stitch flowers to knitted chunky headbands (or earwarmers – I can never decided what to call them).

Craft all about mindfulness and being in the zone, focusing on positives and a distraction from the negatives.

Finally what does craft mean to you?

Simply put, craft is my therapy. It’s all about mindfulness and being in the zone, focusing on positives and a distraction from the negatives, even if only for a short while. And if I can bring joy to others with my bright and colourful creations, then that’s wonderful too.

Use code WOOL10 for 10% off Woofs and Wool – valid until Sunday 27 February 2022
folksy.com/shops/woofsandwool

The maker asking the questions this week is designer and illustrator Sarah Meade from Sister Sister.

Read our interview with Sarah here >

Folksy is the UK's biggest online craft fair, with thousands of pieces created by artists, designers and makers, stitching, printing, soldering, whittling, carving and crocheting in studios and at kitchen tables across the UK.

Meet the Maker – Just to Say…